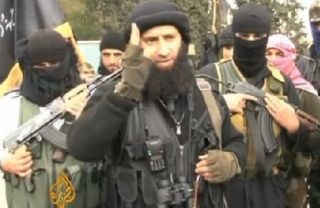 The Westender found this news story that we re-published in May last year from the Fourth International Trotsky-ites at the Worldwide Socialist Web Site. If you substitute “ISIL” for “Al Qaeda” throughout,  it still makes perfect sense today.

Johannes Stern of wsws.org reports that the EU is buying oil from Islamic terrorist groups in Syria

According to a report yesterday in Britain’s Guardian newspaper, the European Union (EU) is directly funding US-backed Sunni Islamist terrorist groups fighting Syrian President Bashar al-Assad’s regime. These groups are looting oil in parts of eastern Syria that they control and then re-selling it to EU countries at rock-bottom prices.

The Guardian writes: “The EU decision to lift Syrian oil sanctions to aid the opposition has accelerated a scramble for control over wells and pipelines in rebel-held areas and helped consolidate the grip of jihadist groups over the country’s key resources.”

According to the Guardian, the main beneficiaries of the EU’s lifting of sanctions are the Al Nusra Front and similar Islamist terrorist groups. “Jabhat al-Nusra, affiliated with Al Qaeda and other extreme Islamist groups, control the majority of the oil wells in Deir Ezzor province, displacing local Sunni tribes, sometimes by force. They have also seized control of other fields from Kurdish groups further to the north-east, in al-Hasakah governorate.”

The EU’s decision to resume trade with oil fields held by Al Nusra explodes the lie that the imperialist powers are waging war in Syria to change the repressive character of the Syrian regime. In fact, they are building up and backing deeply reactionary and oppressive forces.

These events also expose the so-called “war on terror”-the claim that Washington and the EU are fighting Al Qaeda, which served as the justification for US-led wars in Iraq and Afghanistan-as a lie. Imperialism is arming and financing Al Qaeda-linked terrorist groups that commit terrible crimes against the Syrian population, handing over its wealth to the EU and Washington.

Germany’s Spiegel Online magazine recently reported how the Islamists dump Syrian oil on world markets at ultra-low prices: “Since February the Islamist rebel group Liwa al-Islam has controlled the al-Thaura oil-field in the ar-Raqqah governorate… The rebels in al-Thaura sell ten fuel truck cargos each day. They make good money and charge around $13 US for a barrel. On the world market, however, a barrel is traded for $100 US, but this is not of particular interest here.”

Abu Saif, an Islamist fighter of the Muslim Brotherhood-linked Ahrar Brigade, gives another account of how Islamists militias loot Syria: “Jabhat al-Nusra is investing in the Syrian economy to reinforce its position in Syria and Iraq. Al-Nusra fighters are selling everything that falls into their hands from wheat, archaeological relics, factory eq uipment, oil drilling and imaging machines, cars, spare parts and crude oil.”

To secure the oil, the terrorists murder everyone who gets in their way. In one widely reported case, Al Nusra fighters levelled the village of al-Musareb near Deir Ezzor, murdering 50 of its residents after a conflict with local tribesmen over an oil tanker. The mass killings through which terrorist groups control the territory needed to supply oil to European imperialism are documented in videos posted on YouTube.

The imperialist powers rely on terrorist groups as part of their strategy to control the vast energy resources of the Middle East and Central Asia. This fundamental interest underlies the wars against Afghanistan, Iraq and Libya, and on-going war preparations against Shiite Iran-to which the Alawite-dominated Assad regime has close ties. Like Syria, Iran has long been on imperialism’s hit list,” since Washington and its European and Middle Eastern allies see it as one of the main obstacles to controlling the oil trade of the Persian Gulf, and thus of the entire world.

This rape of Syria exposes the cynical decision by middle class pseudo-left organizations-such as the International Socialist Organization (ISO), the German Left Party, the New Anti-Capitalist Party (NPA) in France, and the Socialist Workers Party (SWP) in Britain-to package the Syrian war as a “revolution.” Their class position emerges clearly in this point: they hail the looting of Syrian oil to boost the oil corporations’ profit margins as a “revolution,” and the looters as “revolutionaries.”

Increasing foreign support for the Sunni Islamist forces is accompanied by new threats by US imperialism and its allies to oust Assad, and increasing preparations for direct military intervention.

At a press conference with Turkish Prime Minister Reccep Tayyip Erdogan last Thursday in Washington, US President Barack Obama promised “to keep increasing the pressure on the Assad regime and working with the Syrian opposition. We both agree that Assad needs to go.”

On Friday, CIA chief John Brennan met with Israeli Prime Minister Benjamin Netanyahu, Defence Minister Moshe Ya’alon, Israel Defence Forces Chief of Staff Benny Gantz, and Mossad head Tamir Pardo to discuss Syria. In a cabinet meeting the next day, Netanyahu threatened more Israeli air strikes against Syria, saying Israel would act “with determination… to ensure the supreme interest of the State of Israel [and] prevent the transfer of advanced weapons to Hezbollah and to [other] terrorist elements”.

Israel has already bombed Damascus two weeks ago, ostensibly to prevent arms being transferred from Syria to Hezbollah. The Lebanese Shia militia is a close ally of Syria and Iran and regarded as a main obstacle to Israeli military dominance in the Near East.

On Saturday Syrian president Bashar al-Assad gave an interview to the Argentine newspaper Clarin and the Argentine state news agency Telam, from his palace in the Syrian capital, Damascus. He vowed to keep power, accusing Israel and other “foreign powers” of supporting the Islamist opposition. “Israel is directly supporting the terrorist groups in two ways, firstly it gives them logistical support, and it also tells them what sites to attack and how to attack them,” he said.

He denied that his government had used chemical weapons, saying that “the West” might orchestrate an intervention based on false accusations: “The West lies and falsifies evidence to engineer wars; it is a habit of theirs.”

He called intervention “a clear probability, especially after we’ve managed to beat back armed groups in many areas of Syria.” However, he added that “we are willing to talk to anyone who wants to talk, without exception.”

Assad made clear that he hopes to keep power by convincing Washington that he is a stronger and more reliable custodian of US interests in the region than Al Qaeda: “America is pragmatic. If they found out they were defeated and the regime is the winner, the Americans will deal with the facts.”

This subservience to Washington exposes the bankruptcy of Arab nationalism. In fact, as the Guardian report makes clear, Washington and its European imperialist allies are funding and backing the Islamist opposition to break up the Syrian regime.

The Obama administration is also increasing its efforts to reach an agreement with Moscow, Syria’s main ally. Last weekend, Russian Foreign Minister Sergei Lavrov agreed with his American counterpart John Kerry to set up a so-called “peace conference” in June, supposedly to negotiate an end to the Syrian war. During such a conference, Washington would press for a “negotiated” ouster of Assad and his replacement with a more pliable stooge regime approved by Moscow.

Lavrov is also trying to calm US and Israeli concerns about potential Russian missile sales to Syria. He stressed that these weapons would “not in any way alter the balance of forces in this region or give any advantage in the fight against the opposition.”

Russia is reportedly only supplying SS-N-26 coastal defense but not SA-21 air defense missiles, as part of a weapons deal already concluded in 2011. Lavrov also pledged that Russia would not sign any new deals with Syria.