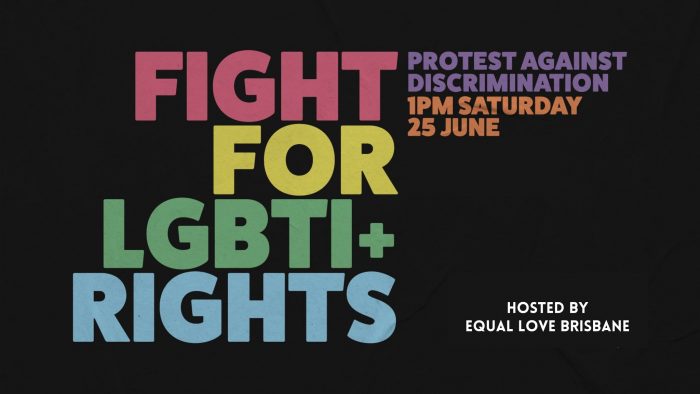 Hundreds will rally in Brisbane this weekend to fight for equal rights in response to FINA’s decision to discriminate.

“Megan Rapinoe had it right, this is about more than elite sport. This is part of a bigger culture war, being waged by the same rightwingers who opposed marriage equality, who are opposed to the equal rights of trans women in all spheres of life. When they can get a victory undermining inclusion at an elite level, they are one step closer to their final goal of total trans exclusion and pushing us back into the closets of 10, 20, 50 years ago.”

“Well we won’t go back! We will rally, occupy and shut it down to send our message: trans rights hell yeah, bigots hell no!”

“We are also rallying because there are laws on the books in Australia that allows gay and trans staff to be fired from religious schools and institutions like healthcare organisations.”

“The power to scrap these laws lies with the new Albanese government. Instead of ending these outdated exemptions, they have instead promised to bring in new legislation to grant even more rights to religious institutions, with a new Religious Freedoms bill.”

“We won’t pause for a moment in our fight against discrimination, no matter who is in government.”

The protest will start at 1pm on Saturday in King George Square, with speakers including:

Stephen Bates from the Greens, new MP for Brisbane