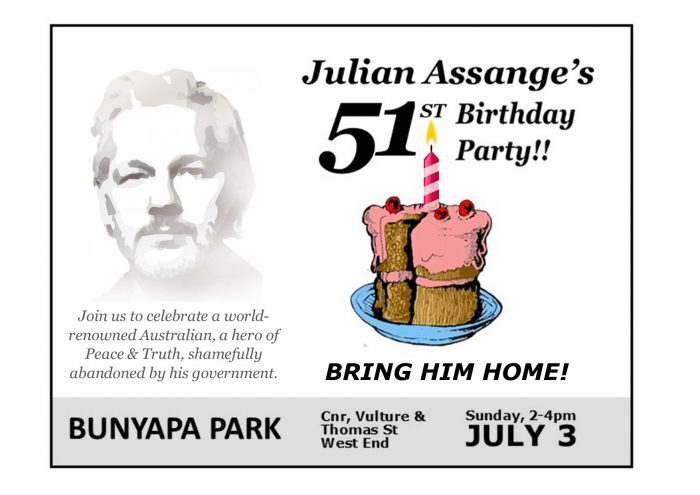 The UK Home Office has ordered the extradition of Julian Assange to the US. The UK courts found it would not be “incompatible with his human rights, including his right to a fair trial and to freedom of expression” to extradite him to a country whose intelligence agencies plotted his kidnapping and murder, and where his ‘fair trial’ will be held in a court that always convicts.

The UK Supreme Court overturned the lower court decision against extradition after the US promised that their treatment of Assange would not be oppressive, unjust or an abuse of process. No doubt these judges would have accepted Saudis reassurances that they would treat Adam Khashoggi with great dignity too.

What can we do?

The new government are showing signs of standing up for Julian, as are the non-Murdoch press, but that means standing up to the US, and everyone is justifiably terrified of what the US bullies will do if they don’t get their way. The Albanese government must be persuaded that they have wide-spread Australian support.

Independent MP Andrew Wilkie, the chair of the Bring Julian Assange Home Parliamentary Group, condemned Britain’s decision an outrageous betrayal of the rule of law, media freedom and human rights, and he added that the time was up for the new federal government hinting at caring and then doing nothing.

“The new Australian government is now to be condemned for abandoning an Australian hero journalist facing the very real prospect of spending the rest of his life rotting in a US prison.”

The victory of Anthony Albanese and the Labor Party in the Australian election brings us new hope. Our new Attorney-General Mark Dreyfus issued a statement last year saying that Labor wanted the Assange matter ‘brought to an end’. Anthony Albanese, our new Prime Minister, said that he couldn’t see any purpose to keeping Assange in jail and that “enough is enough”.

But are these weasel words?

The battle to stop the extradition of Julian Assange hangs in the balance but it depends on all of us! Urge Labor to stand up for Julian! Join us on SUNDAY 3 July, 2-4pm, Bunyapa Park, West End.