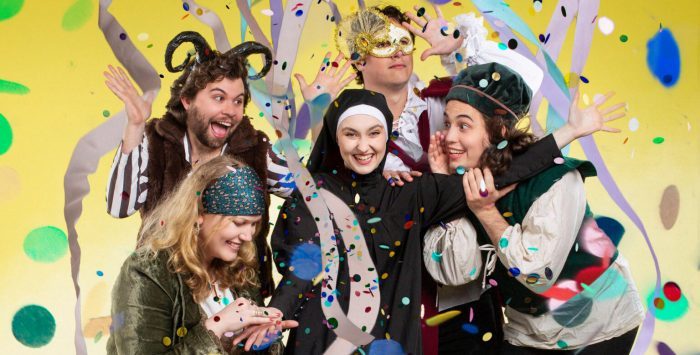 The Queensland Shakespeare Ensemble will bring Aphra Behn’s brilliant, yet rarely performed, The Rover to Brisbane this August and September.

Two sisters throw themselves into the chaotic streets of Naples during Carnival. One in search of her forbidden true love, the other in search of a good time! As their paths cross with a band of exiled English Cavaliers, Europe’s most famous Courtesan and a host of colourful characters; we are taken on a thrilling yet dangerous ride full of music, revelry, and masquerades!

From the pen of England’s first female professional playwright (and sometimes spy), comes a play that scandalized 17th century audiences and continues to ask bold questions about freedom, anonymity, class, and sexual politics.

Directed by Rebecca Murphy (Rosencrantz & Guildenstern Are Dead, Henry IV Part I), The Rover will be Restoration comedy at its raucous, raunchy, and relevant best with live music performed before and during the show each night and a cast of some of Brisbane’s most exciting classical actors. Dudley Powell returns to QSE to take on the role of Willmore (the rover himself), Core Ensemble member Leah Fitzgerald-Quinn will play Hellena a noble woman destined for the nunnery but unwilling to go quietly, Rebekah Schmidt (most recently seen as Mercutio in Romeo & Juliet) takes on the famed Angellica Bianca and new-comers Emily Potts and Milan Bjelajac are sure to delight as the young lovers Belville and Florinda.

The Ensemble will once again be running its Shakespeare Beyond initiatives; A Night At The Theatre (ANATT) and Relaxed Performance as part of the season. Established in 2016, ANATT invites patrons to donate the price of a ticket.

QSE then works with community partners Australian Red Cross, Communify, and Arafmi to share tickets with people who might not have otherwise had the opportunity to experience live theatre.

“It was the first time I had ever been to a theatre and to see Shakespeare. I was a bit nervous that I would not understand it. It was riveting and exciting. I understood it all and did not want it to finish.” Julia – ANATT audience member.

A Relaxed Performance of The Rover will be held at 2pm on Saturday, August 27

Relaxed Performances are designed to welcome people who may enjoy a more relaxed performance environment, including (but not limited to) people with autism or individuals with sensory sensitivity. Parents and caregivers may also find the inclusive atmosphere relaxing with audience members free to move, speak, and respond throughout the performance.