Iran, Nukes, Oil, and the Effect on Australia

The Iran Deal is likely to be good for the Australian economy and Australian real estate, and here’s why.

Where is Australia now?

The Australian economy is drifting downwards, with interest rates following it, as federal and state government budgets sink into the morass. They can’t stimulate the economy any more, the money has been spent, the deficits are too high, and with some exceptions (NSW and SA) our politicians are out of ideas.

We can’t look to the global economy to provide a recovery. The IMF issued a gloomy outlook report on global economic growth this week, reporting in The Telegraph: “the global economy is caught in a low-growth trap as innovation withers and the population ages across the Northern Hemisphere. It will not regain its lost dynamism in the foreseeable future.”

Falling commodity prices are reducing the dollar value of our commodity exports, iron ore, LNG and thermal coal, even as export volumes rise. In an oversupplied world, there are more reasons for commodity prices to fall than rise.

We are a net importer of oil products. The massive oil price fall late in 2014 resulted in one good piece of news for consumers: petrol at the pump fell from around $1.50/l to $1.00/l or less, in some places, for a brief time. But a small recovery in oil prices, and a weakening dollar, has seen petrol at the pump claw back most of that, to be currently around $1.30/l. The much vaunted petrol pump dividend didn’t last long enough to make an impact. But the Iran Deal may well change that, for the better as far as we are concerned.

It’s all about nuclear weapons)and aiming to prevent Iran from producing them, for ten years at least. There is plenty of press coverage of that already, but what really interests us in Australia is the prospect of lifting sanctions on Iran. But in passing, I mention the proposal by Premier Wetherill in South Australia to lift the bans on expansion of uranium production. We are not direct exporters of uranium to Iran, but more certainty in the uranium market could encourage the relaxation of export controls and help the Australian uranium mining industry.

The headlines are all about nukes, but what should be exciting us in Australia is the lifting of sanctions and the subsequent impact on oil prices. The impact on Iranian oil exports has been briefly addressed by the Financial Times but, of course, not the impact on Australia.

We would welcome any reduction in petrol prices at the pump, and we explain here the mechanism by which that will flow through.

The price of oil fell as the markets reacted to the Iran Deal with an expectation that the resumption of full-scale oil exports by Iran would lead to a fall in the oil price.

Iran and oil – So what’s the story?

It has been so long since Iran has been allowed to export oil (legally) that we tend to forget how big a player Iran used to be. We all know that Saudi Arabia is almost the world’s biggest oil player (Russia is a slightly bigger player, hence the Russian economic pains right now). Iran, if it resumes full production and reaches its potential, would be the fourth biggest oil producer after Russia, Saudi Arabia and the USA, which would change the geopolitical structure of the oil industry. (See table, 2011 figures.) Australia does produce oil, but comes in at #30 in the list of countries and is a minor player. 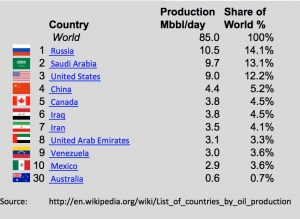 Of those 3.5M barrels of production, only some 1.5M barrels are exported, the rest presumably adding to the stockpile. Iran has a stockpile of oil, ready for market, which by some estimates is equivalent to 30 days of world consumption.

So when if not now?

Not so fast. The enemies of Iran Deal are not all in Israel or Capitol Hill. In Iran, the Iranian Revolutionary Guard was thought to be against the deal, as it profits from the grey trade under sanctions. However, the commander of the Guards has come out in favor of supporting the agreement. “Mohammad Ali Jafari was the latest of an increasing number of top Iranian figures who have come out in support of the Lausanne tentative agreement which provides the basis for a more comprehensive deal” reports The Guardian.

Set against that will be all the business interests and banks keen to do business with Iran.

So, the hurdles yet to be jumped are:

Get the detail of the Iran Deal agreed by June 30; arguably the most difficult part of the deal.

Get it passed by the nations involved, get agreement to lift sanctions and get the Republicans to repeal the sanctions legislation.

Persuade Israel not to take unilateral action against Iran.

All of this takes place against the backdrop of the shifting front lines of war in Iraq, Syria, IS held territory and Yemen, with an honourable mention for Ukraine and Russia.

If that sounds like praying for a miracle, well, perhaps it is, but let us take heart; in 35 years, this is the closest we’ve come to normalising relations with Iran, which would transform the world, so perhaps a prayer or two is not out of place.

So will oil prices fall?

In a scenario where Iran returns to orderly trading, sometime after the deal is signed, say August at the earliest, it has a stockpile of oil of some 3M barrels that could go immediately onto the market, reducing prices perhaps by 10%.

Then, as exports ramp up, Iran makes a serious dent in supply. The scale of the impact is guesswork, but it would likely reduce the price of oil to US$40 or below. For Australia this would be enough to take our petrol pump price back to $1.00/l, perhaps even as low as $0.90/l in some scenarios.

But every action has a reaction. According to some market analysts it would probably be enough to bring Saudi Arabia and others in OPEC to the table, agreeing to a cut in production with a view to keeping prices around present levels.. But this is by no means a given. Saudi Arabia is in a proxy war with Iran, and it is hardly friendly with Russia. It is quite likely that it could let oil prices fall to their production cost of around US$20 a barrel, in a war of attrition, to make life difficult for Iran. In that scenario, it may be a year or two before any production cuts are agreed and a new oil world order emerges.

Meanwhile it looks like lower oil and petrol pump prices for Australia. This would come at a helpful time when we are desperately in need of good news for the economy. Lower fuel costs would allow for more consumer spending and lowered business costs, offsetting any inflationary rises from a falling dollar. Australia imports some 475,000 bbl/day (2010 estimate), which is almost half of our consumption, and produces some 140M bbl/p.a. with production in decline since 2001. Oil is 39% of our energy consumption so the price is very relevant to our business costs.

Improved consumer confidence in Australia, in conjunction with lower mortgage rates, would continue to exert a positive influence on demand for real estate and help maintain or increase prices. So we start to see a scenario where present real estate prices look sustainable for at least a couple of years, by which time our economy may be showing signs of recovery.

But what of the Reserve Bank?

At the moment, the Reserve Bank is between a rock and a hard place. It’s looking at massive reductions to the cash rate, to get the exchange rate down to around US$0.70 and to stimulate the non-mining economy, but is hampered by the boom in Sydney house prices. which already look set to increase 15% to 25% over 2015, although the rest of the country sees prices barely altered.

A lowering petrol pump price gives the RBA a couple of options:

If it cuts the cash rate dramatically, say to 1.5%, and the exchange rate falls, say to below US$0.70, then, all things being equal, our domestic petrol price would increase along with inflation. But here’s the bonus: if the price of fuel is falling because of Iranian exports, then any falls in our exchange rate will be offset against that. In a perfect world the RBA would lower the cash and exchange rates just enough to keep the pump price around $1.20/l instead of falling below $1.00/l, which achieves the RBA’s objectives yet leaves consumers feeling that their costs have fallen.

The RBA might decide that no further cuts are needed. Instead of looking to the exchange rate to do the heavy lifting, it may decide to wait and see what lower pump prices do to the economy, and if it is lucky, that may be enough stimulation to help the economy to grow again.

There has been no April rate cut by the RBA, with the bank indeed deciding that there are reasons to wait and see. The markets are assuming that a May cut will follow, but this is by no means certain. The above scenario would give the bank room to wait until July or later to make any cuts, while it sees how the Iran Deal and lower fuel prices play out.

Of course none of this does anything to help the state and federal governments out of their deficit mires, but that is another story. At least, if the economy starts growing, then house prices (except Sydney) look sustainable, consumers spend more and there is the hope that we will avoid a recession.

Donald Horne once described Australia as “the lucky country”, not because it is lucky, but because, every time disaster looms, it seems like some good event comes out of the blue just in time for disaster to be averted. After months of miserable economic news, a deal with Iran may turn out to be just the stimulus that we need.

Propell has a national workforce of over 200 staff in every state and territory in Australia. Propell to undertake valuations across all states and territories with a postcode coverage exceeding 85% of Australia’s population.