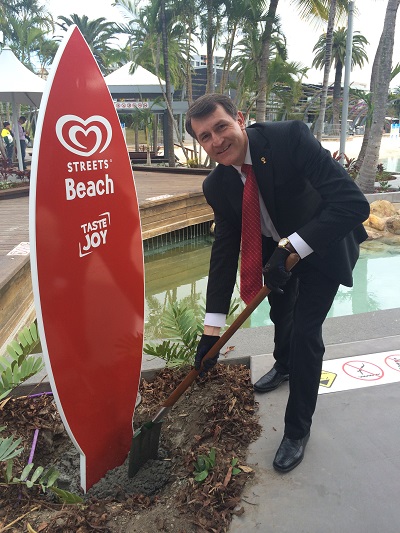 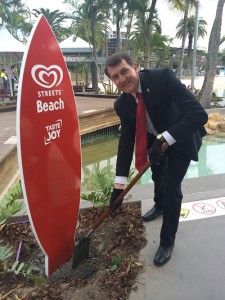 The Lord Mayor said the upgrades to Streets Beach had been timed for completion ahead of G20, when the world’s eyes would be focussed on the Summit held at South Bank.

“One of our most popular tourist attractions has been given a well-deserved refresh with new paving, decking, seating, and umbrellas, as well as fresh landscaping and accessibility features and new children’s play equipment,” Cr Quirk said.

“With more than 7000 visitors expected to attend G20 in November, we want to make sure our most loved tourist destinations, such as South Bank, are ready to showcase our city’s assets.

“Already South Bank receives an estimated 10 million visitors each year, now with the installation of these modern, user-friendly facilities ensures Streets Beach will continue to offer a world-class recreational experience.

“No other capital cities in Australia can boast a swimming beach right in the centre of the city.  With our ideal climate in Brisbane, South Bank and Streets Beach are popular locations for both visitors and residents.

“The Streets Beach, Aquativity kid’s area and Boat Pool attracted almost half a million users last financial year and this update will help grow this number even further.”

Cr Quirk said the renovation, which began in late March, had greatly enhanced some of Brisbane’s most-loved destinations.

“New handrails and ladders installed in wet areas have boosted the inclusiveness of the facility, enabling people of all abilities to use the pool,” he said.

“Visitors to Streets Beach will be able to make use of Council’s free Wi-Fi in the area, which was launched by Council earlier this year to enhance as a key leisure destination.”

Works were completed with funding from the Department of State Development, Infrastructure and Planning.

“Council would like to thank the Queensland Government for its assistance, which will help to cater to increasing South Bank visitor numbers as it becomes an even more popular attraction,” said Cr Quirk.