Removalist reminds us not to go back 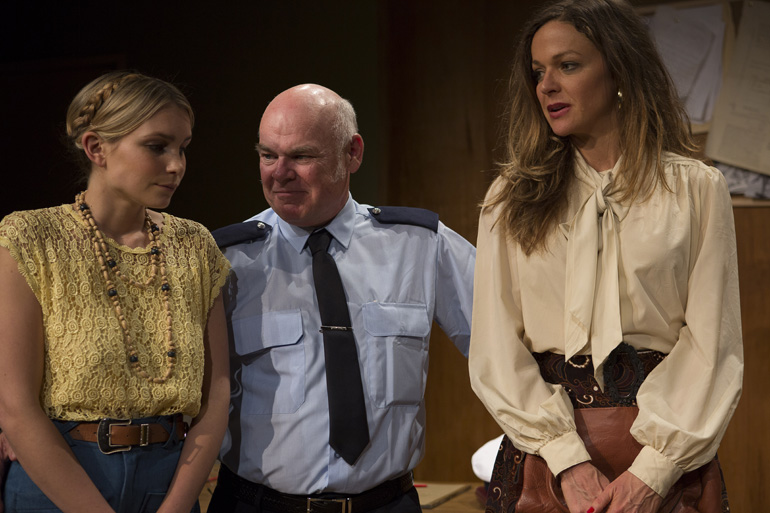 My Uncle Bruce leapt fully formed from my childhood memories onto the Powerhouse stage last week, channelled brilliantly by lead actor Laurence Coy. A Victorian Police Sergeant for twenty years, he epitomised a pithy realism and old school approach to manners and respect that involved a certain amount of biffo. There was a sergeant Bruce or Barry or Mick in many towns and suburbs across Australia.

David Williamson wrote the Removalists in 1974 and captured the type perfectly. Probably, neither Williamson or Coy knew my uncle: they didn’t have to, he was a type.

Uncle Bruce is still alive and well, “for an old fella”, but I have not asked his opinion of David Williamson’s The Removalist. I suspect he would recognise the elements of truth, point out the dramatic devices that have been employed to concentrate the action and focus the reader’s mind and then reflect that there is something to be said for the old ways, even though some coppers might have gone a bit far.
That view would be somewhat disingenuous. Coppers everywhere learn to rough up suspects without leaving too much evidence. I’ve experienced first-hand the way a phone book spreads the impact of a blow to avoid bruising. There is always a tension between the polite society that the police protect and the brutality involved in that protection.
The Removalist has survived as a play, and component of the higher school curriculum, because it is a classic. Beautifully structured in two acts, it has a wonderful balance between humour and tragedy, between human foibles and depravity. It employs Australian English and the vernacular beautifully and deals realistically with sexism, domestic violence, power and corruption without ever descending into polemic.
The production by Leland Kean and Critical Stages is faithful, fresh, exuberant and controlled. Ally Mansell’s staging is simple, clean and striking, Luiz Pamploa’s lighting makes its powerful presence felt from the dramatic opening scene. The actors flesh out the multi-dimensional nature of the characters that Williamson so cleverly wrote.
Ashley Lyons as the perpetrator/victim plays an obnoxious yobbo who unexpectedly gains our sympathy as a culturally oppressed bogan. He is repulsive, real and pathetic as the drama unfolds.
Josh Anderson as the hapless Constable Ross is immediately likeable and wins our full sympathy until his demons betray him and we again feel for him as he too is crushed.
The eponymous removalist fills the role of Puck: defining and offsetting the central drama; relieving us from its intensity and horror while highlighting it with wry observations. Perfectly played by Ben Wood who provides the gravitas and deftness to get the laughs without losing the sense of dread engendered by the shocking inanity of evil unfolding before us.
The women’s roles are minor and narrow, despite being the centre of the narrative arc. The play revolves around Caroline Brazier’s and Lucy Heffernan’s situation but their characters are limited to reacting to the men. As soon as they stand up for themselves they’re dismissed on the basis that as sexually active females they are immoral and therefore irrelevant.
The sublimation of the abuse and the powerlessness of the women is less a failure of the dramatist, the director or the actors than an accurate reflection of reality which The Removalist sets out to expose.
Ultimately, this drama is testosterone-fuelled: male on male violence resolves the dramatic tension. In the classic, sexist, definition it is a tragedy. The hero does not get the girl.
In addition to is power and poise as a dramatic work, The Removalist remains important because it captures the awakening of Australian society to a more enlightened approach to the issues of power, authority and the role of women.
During the seventies, art like The Removalist revealed to an affluent, educated Australian middle-class that the law of the jungle was rife and that our governments and police forces governed in the interests of the few, rather than the majority.
That burgeoning awareness led to a series of Royal Commissions and inquiries that ended a generation of conservative rule and entrenched favouritism. At the same time, what we now call first-wave feminism built on the work of the suffragette’s and began redefining the role of women.
The shocking relevance of the play forty years after it was written, is how entrenched those attitudes are still.
Not only do we still encounter the occasional magistrate who thinks a bit of ‘love pat’ is a reasonable form of foreplay, we have a Minister for Women who openly says that women do not have the right to determine whether or not they choose to have sex.
“The notion, on one hand, that men should be able to demand sex whenever they want or, on the other hand, that women can refuse it whenever they want, well there has to be a negotiation, a compromise” Tony Abbot, Minister for Women – ddth mmmm 2014.
Well no Tony, there does not. This is the attitude at the heart of the shocking statistic that one Australian woman each week is killed by her partner. Over half of these murders take place in Queensland, despite this state having only 25% of the population.
The Removalist goes to the core of this issue, exposing the multitude of ways that men express the attitude that women exist to serve male needs.
Women have stronger roles now, they have better comebacks, they are the protagonists, the playwrights, the directors. The shocking relevance then, of The Removalist in this day and age is that it exposes the past to which our current rulers so enthusiastically wish to drag us.
The great thing about having this vigorous and fresh but faithful production of this classic work is that it shows us that we have evolved. The stark contrast between the attitudes of the past, which our current rulers and mainstream media try to sell us as “normal” and the attitudes that we want to pass onto our children could not be highlighted more succinctly.
It is a pity this has such a short season. It has played to full houses so far and could possibly have sustained a longer run. In itself, that reminds us that Williamson has given Australian drama some solid foundations on which we can build. It may be dated, it may reflect some fundamental flaws of time in which it was written, but it is powerful drama.