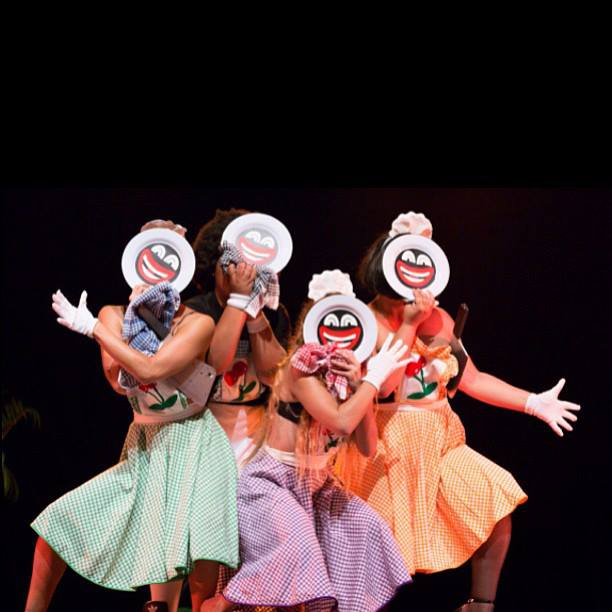 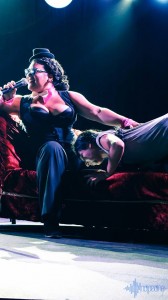 Candy B gets some close up audience participation

Three very sexy ladies and one cross dressing man titillate, challenge and confront the audience from every which way over about an hour of action packed burlesque crossing genres and genders like most of us cross lines in the footpath.

In a year where this reviewer saw about a dozen different theatrical performances, I certainly left the best til last seeing the New Year in at Woodford Folk Festival with the smartest, sassiest show I saw during 2013.

I can’t say whether you will feel confronted or not. That will depend on your ancestral relationship with colonial exploitation, your sexual orientation and comfort with sexual imagery. Woodford on New Years Eve is not Queensland’s most straight laced crowd by a long shot but I’d say most people in the audience were confronted at some stage during the evening.

The chorus of a song about colonial sperm, “Milky milky the milkman, spreading his cream all over the land” may well shock some. The sight of a man of Dutch heritage picked at random from the audience and dressed as a baby, sucking from the teats of a large black woman singing those words is bound to shock a few more. An extra frisson is provided by a dissertation about the behaviour of colonists “taking women without asking … just like they took the land”. With the added nuance that most white South Africans of note were raised and nursed by black nannies the frisson becomes a palpable tension relieved by laughter as the scene unfolds and the song begins.

By the time the song ends and 350 white hippies are shouting “black power” and “black  is beautiful” it is perfectly clear that the hot brown honeys have the situation in hand, the audience in the palm of their hands and their subliminal messaging well down our collective gullet.

I find myself humming “Milky Milky the Milkman” a full week later as I write and my hair standing on end all over again at the audacity of these very, clever women.

And that is just one of the dozen or so numbers delivered during the course of the evening.

The Hot Brown Honey’s last performed in Brisbane in November. Let’s hope they’ll be back as soon as possible. You can betcha bippy that Westender will be letting you know when they do.