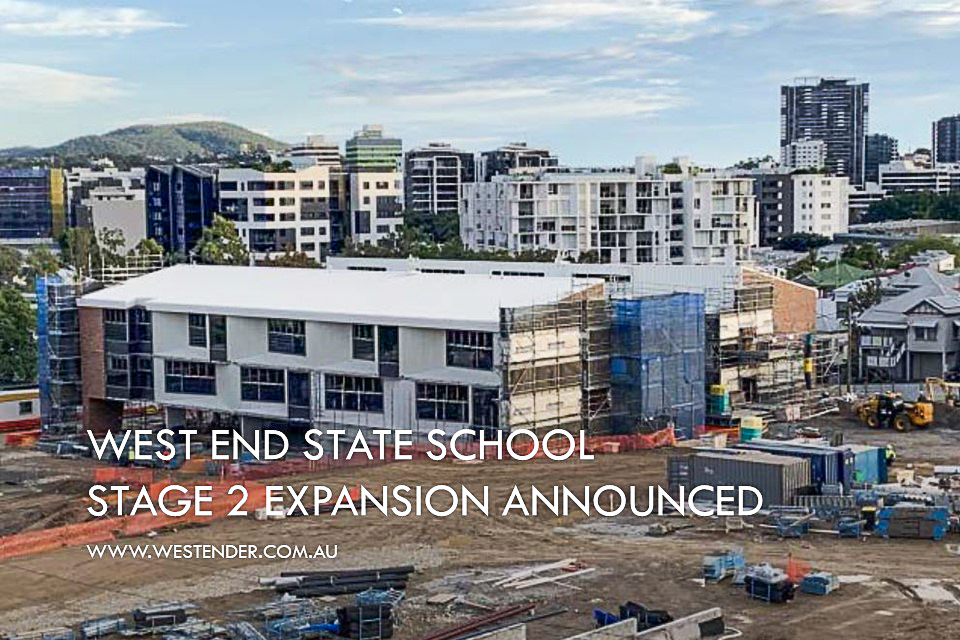 Just days after the keys to the First Stage extension were handed over to the school, the State Government has announced today that Stage 2 of the West End State School expansion will go ahead.

The new extension will provide an additional multi-level learning facility, administration and library building and a Performing Arts Centre, including an auditorium and music classrooms.

The project, estimated for completion in 2022, is expected to generate up to 100 local jobs in the area.

Local Member for South Brisbane, the Hon Jackie Trad, said she was pleased to announce the school expansion in her community.

“This is wonderful news for the entire West End State School community and the hardworking parents, teachers and support staff.”

“The new facilities will add to existing infrastructure and will provide more valuable learning space for our children” stated Ms Trad.

President of the School’s Parents and Citizens’ Association (P&C), Donovan Marsh said the P&C welcomes the announcement. He said if the population on the Kurilpa Peninsula continues to grow at current rates, the school will need three to four new classrooms each year.

“It’s critical to the growing numbers that we continue to see at West End State School, and also critical to allowing the P&C to grow and continue to meet the needs of the school,” Mr Marsh said of the Stage 2 expansion.

Mr Marsh said the P&C would have a new office and a much-needed new uniform shop in the new extension to which it will be contributing funds.

“As the school expands, it gives the P&C a little bit more space to grow as well and be able to cater for the growth in the Outside School Hours Care program.”

Mr Marsh said that four years ago the school gave up one of its tennis courts for demountable buildings to absorb growing student numbers and he is hoping that when Stage 2 is complete, the playing space will be returned to the school.

The performing arts centre will incorporate some parking which will assist the growing number of teachers and P&C staff given the pressure on parking spaces in the area, Mr Marsh said.

And while the school will use the new facilities during weekdays, there is scope for the community to use the new performing arts centre after hours as already happens with the sports hall – so the expansion benefits the whole community, Mr Marsh said.

Today’s announcement coincided with the opening for tenders for Stage 2 expansions across the state.

“This education funding is one part of the Palaszczuk Government’s strategy to stimulate the state’s economy, to unite and recover and invest where it matters” said Ms Trad.