A good news story from NDIS for local Westender 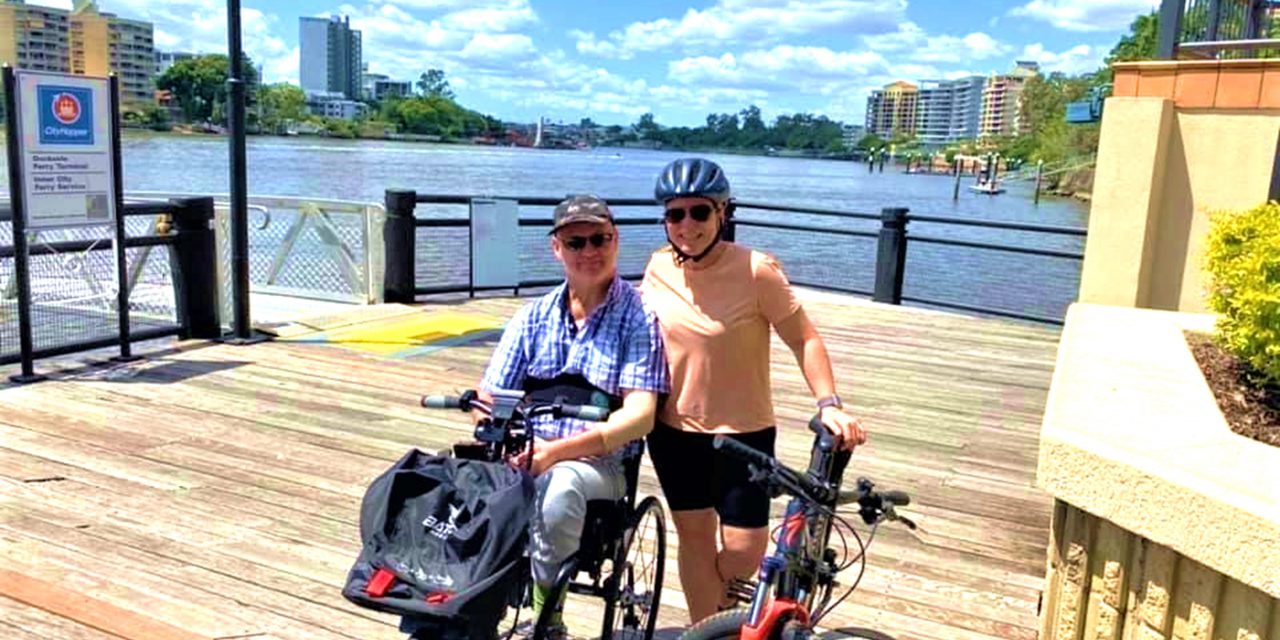 West End local Brad Kinsela is enjoying his independence and freedom for the first time in 30 years after receiving his
Batec, an electric attachable handbike/power assistance for wheelchairs. The device was supplied by through National Disability  Insurance Scheme (NDIS) funding.

The 52-year-old uses his new handbike to get around the neighbourhood, visit restaurants in South Bank, bike rides with his wife and to commute to work in the city.

Brad has been using the motorised device since the beginning of last year, and said he is still getting used to his new-found independence.

“It was the first time in 30 years that I had been out in the community, by myself, without any fears about  going up a hill or getting stuck anywhere and I was just free,” Brad said.

“The next weekend (after getting the Batec), I went out to breakfast with my wife, and it was the first time  in 20 years of marriage that she walked beside me rather than behind me. When I was talking to her I  could see her face rather than… talking to her without actually seeing her.”

“It is highly unlikely that I would have been able to have a Batec without the NDIS.”

Brad, who has a spinal cord injury, at first found it difficult to turn the ignition and to clip the device on and off his manual wheelchair.

“I’ve now worked out how to take it on and off myself, which means I am pretty much independent; I  have no hesitation going out. When I go to restaurants I can disconnect from it, park it, and then just sit at the table,” he said.

“The Batec has given me the ability to still use my manual wheelchair and maintain that strength, but it  has also given me the freedom that an electric chair does in terms of getting out and about.”

Because he is still testing the boundaries of how steep he can go up before spinning his wheels and where he can safely go, Brad occasionally uses a support worker to assist him.

“The NDIS has given me the freedom to literally have a good crew of personal support workers come into my life; it has changed our lives,” Brad said.

When Brad isn’t getting out and about in the community, he works as an Executive Director with the Queensland Government.

Given Brad’s knowledge of the foundation principles of the NDIS, when he began the process of accessing the Scheme himself, he knew exactly what goals he wanted to pursue using his NDIS plan.

“I was able to articulate really strong goals, which then required appropriate levels of support to achieve those goals.”

Brad received assistance to apply for and implement his NDIS funding from Carers Queensland’s NDIS Local Area Coordination Partner in the Community Program for the Brisbane region.

Brad received assistance to apply for and implement his NDIS funding from Carers Queensland’s NDIS  Local Area Coordination Partner in the Community Program for the Brisbane region.

If you need help, Carers Queensland can support you to find out more about the scheme, apply for funding and help  you get started with the program.

If you have a disability but are not eligible for the NDIS, Carers Queensland can help you identify and link to support options in the community.