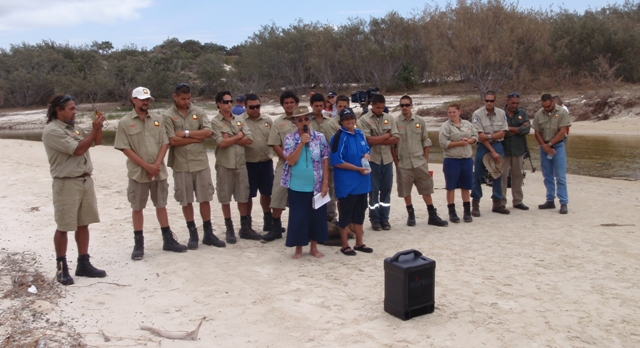 A project led by the University of Adelaide has discovered a number of North Stradbroke Island’s wetlands reach back as far as 200,000 years.

“Through our collaborative work with scientists from University of Adelaide and elsewhere, we have discovered that North Stradbroke Island is an Australian exception,” Dr Marshall said.

“We cored and dated 16 wetlands on the island and found six dating to the Last Glacial Maximum or earlier, with one being more than 200,000 years old.”

Prior to the discovery, climate scientists believed Australian wetlands dated back to the last great Ice Age, about 15,000 to 20,000 years ago.

Minister for Innovation, Science and the Digital Economy Leeanne Enoch said such a discovery about Australia’s wetlands drastically changes the perception of Australia’s climate change history and first peoples.

“By studying cores taken from freshwater lakes and swamps on North Stradbroke Island, a team, including scientific officers from the Department of Science, Information Technology and Innovation (DSITI,) has made a world-class contribution to climate science,” Ms Enoch said.

“As a Quandamooka woman originally from North Stradbroke Island, I am proud of the fact Minjerribah Moorgumpin elders assisted in the coordination of the extensive field work required for this detailed scientific investigation.

“The significance of this research is that it greatly adds to our understanding of the ancient climatic changes that shaped our country, our wildlife and our first peoples.”

Quandamooka Yoolooburrabee Aboriginal Corporation traditional owner Darren Burns said the results of the scientific investigation confirm that the Quandamooka have most likely relied on the Island’s natural resources for hundreds to thousands of years.

“Coupled with the existence of the Pleistocene sites, this study demonstrates the long and extensive connection Quandamooka people have to our ancient land,” Mr Burns said.