Some Australian history you never learnt at school 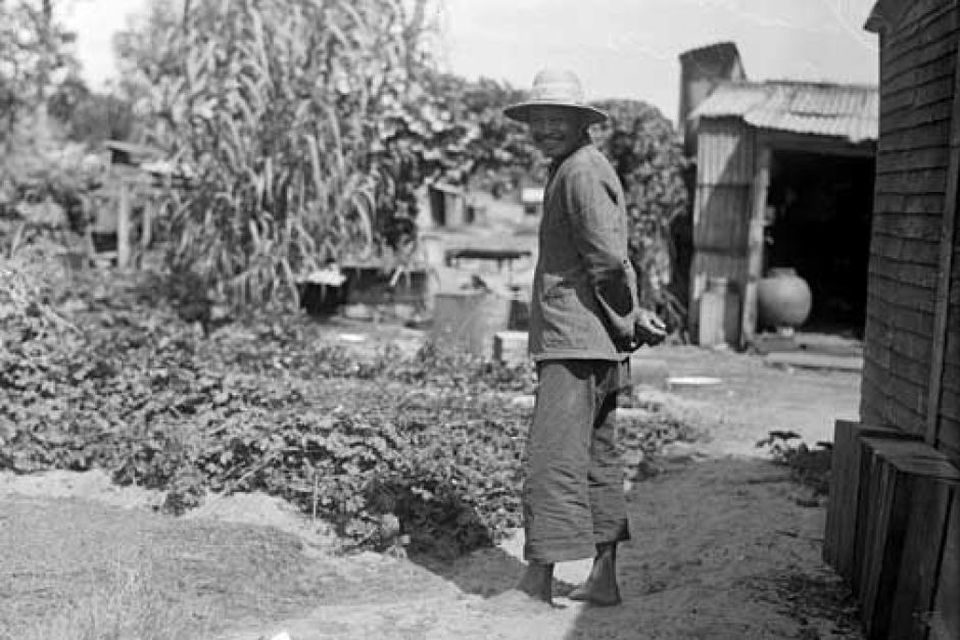 Combining two of my loves, Australian History and Gardening, here’s an interesting first-hand account of the Chinese methods of agriculture near the Gympie goldfields in the 1860s.

We should not complete our sketch of the agriculture of the Wide Bay District, did we not refer to the Chinamen’s gardens around Gympie. This race of people adapt themselves wonderfully to all sorts of colonial industries. They are to be found in large numbers on the diggings sinking their little round holes, in which it is a perfect mystery to a European how they can work. They will work poorer ground than others think it worth their while to engage in.

They are excellent cooks and are everywhere found in this capacity. As shepherds they are quite equal to white men. We never heard of their being engaged as stockmen, or bullock-drivers, but they are often found driving a team of horses as pedlars. In every town there are more or less Chinese storekeepers, principally in the greengrocery or sweetmeat line. But as gardeners they are pre-eminent, and supply a want that without them would be much felt on every diggings in the colony.

In most other pursuits they naturally have to copy the processes of the European colonist, but in this they can carry out their old plan brought with them from the home of their forefathers. That it is far superior to the English system for such a country as Queensland, no one who has seen them both will for a moment doubt. In these gardens they can not only carry out their own system of horticulture, but with it they unite all the habits and modes of life peculiar to their country. Here they revel in all the luxuries of the short tunic, wide-flowing pantaloons, quaint pointed shoes, enormous wooden, straw or pith hats, and flowing pig-tails reaching well down their back. Instead of the wheel-barrow or horse-dray, they revert to their own bamboo and baskets, which serve them for every sort of carrying and fetching. In fact a Chinaman’s garden is a miniature China, and the stranger on entering it can easily fancy himself transported to the Flowery Empire.

Even in the selection of the sites for their gardens the Chinese are actuated by an altogether different idea from that of the Englishman. The latter would certainly look around for the richest piece of ground he could find. Not so the Chinaman. His one great object is to find what a Yankee would call a water privilege, a site where there already exists, or where the nature of the ground permits of the formation of a large water-hole. Give the Chinese gardener a full supply of water and his fortune is made.

In nine cases out of ten he has to obtain this by artificial means. Across some gully, or shallow creek, too small to admit of its being flooded in the wet season, a dam thrown; the neighbouring ground on one side is cleared of its timber, which serves to make a pig-proof bush fence.

In one corner of this lot the house is erected, which is never an important part of the work of improvement. Next, what is known to diggers as a California pump is placed alongside the dam, by means of which the water can be raised to a sufficiently high level to reach all parts of the garden. Then a regular net-work of canals is laid down.

There are usually three or four of these main water-courses from which radiate lesser ones, until every walk in the garden has its little canal alongside it. These smaller ones are not always full of water, but are divided from the main streams by little dams with a wooden sluice-head.

Beside these water-courses there are a number of tanks either cut out of the clay subsoil, or formed by letting zinc-lined packing-eases into the ground. These too have their inlets and outlets, and vary in size from a few huge ones into which the bodies of several dead horses could float, to those the size of an ordinary drapery case alongside the beds. As the small canals are all connected with the large water-tank, so are all these lesser liquid manure tanks with one or other of the larger ones.

When once the construction of this machinery for the supply of water and liquid manure is complete, it is an easy job for the garden to be made to assume a flourishing appearance. The beds are dug, and all the soil from the canals and tanks, as well as from all the paths, is heaped upon them, thus raising them a foot or eighteen inches above the paths, and securing surface-drainage, the only kind requisite.

From the day the seed is placed in the ground it is constantly nourished with liquid manure, and moistened many times a day with water. Not content with this, a large compost heap or tank is formed, and the young plants of every description, as soon as large enough to admit of that treatment, will have a handful of finely pulverized manure placed around their roots. Thus, from the very first, the plants are forced, and as a consequence their growth is very rapid. Highly concentrated dry manure, liquid manure, and water, cannot fail to produce wonderful effects in a climate like that of Queensland.

The rapidity with which these quiet, unassuming men will turn the dry and arid forest into a smiling garden is almost miraculous.

The first time we had an opportunity of seeing the effect of their system was at Gvmpie, in the early part of 1868. On a visit to some friends who lived on the outskirts of the diggings, we saw just in front of their hut, peeping through the trees, the green beds of the gardens. A very few weeks before, we hind ridden over that very spot, and knew the land to be a white, unproductive loam, of a hot, sandy nature, about the most unpromising soil possible for a good garden.

Now a dam had been put up, the land cleared and cultivated, and a house built. Already, at early morning, the dapper owners might be seen emerging from their garden, with their well-filled baskets of vegetables of all sorts, which found a ready sale among the diggers and at the eating houses and restaurants. On visiting the garden we were courteously received by one of the owners, who, after eagerly inquiring what we wished to buy, and learning our desire to look around, at once granted permission. Already there were splendid beds of cabbage, broccoli, turnips, Chinese turnips—a white cuneiform root, softer and juicier than the common white turnip, with a peculiar flavour, but not at all unpalatable–and almost every vegetable to be found in the colony, with cucumbers, English and American pumpkins, and several varieties of melons.

We learnt that there were fifteen men working here, proprietors in common. All were busily employed. Some were breaking up new ground, some working at the pump ; some transplanting young eschalots and other vegetables ; some with baskets of dry manure were carefully placing it near the roots of the various plants; others were ladling out the liquid manure from the little tanks on to the beds; one was engaged in making baskets from the split canes of the ” lawyer ” vine.

While some were away selling the vegetables, others were visiting the neighbouring killing and milking-yards, gathering the blood, offal, and manure, for the compost, and liquid-manure tanks. All this they carry with the help of the indispensable bamboo in two large, strong baskets.

With these a little Chinaman will carry a weight which would make a stout Englishman stagger; such is the force of habit. It is curious enough to see them carrying these loads. Accommodating their bodies to the swing of the baskets, they trot along with a swaying motion and at a good rate of speed, carrying either liquids or solids with equal safety.

In this painstaking manner is all the manure obtained which fructities their gardens.

To men who have been for months living on dry rations, beef and mutton and flour being the staples, the fresh, crisp vegetables supplied by the Chinese are a great boon, and these gardens must be to their owners a veritable mine of wealth for some months after starting. Afterwards their plenty makes vegetables very cheap. On Gympie, at first, large prices were paid for them, a mere handful of anything costing a shilling. Soon, however, many such gardens were in growth, and vegetables became as cheap or cheaper than in Brisbane.

Some foolish people, with an entire ignorance of the laws of chemistry, object to the Chinaman’s vegetables, because they are raised with the assistance of so much manure. But as a rule they find a ready market, and the wiser portion of the digging community—which is happily much the largest—look on these gardens as supplying those requisites to their diet without which sickness and disease would be for more prevalent.

They nearly always have fair play shown them. Occasionally, some blackguard, trusting to the greater whiteness of his skin, takes his vegetables without payment, and knocks down or maltreats his victim, or else makes the matter subject of jest ; but happily these are very exceptional cases, and it is a matter of congratulation that on the diggings, where so much is left to individual action and public opinion, so few instances of this or any other species of lawlessness are witnessed.

Nor are the Chinamen at all disposed to submit quietly to this or any other insult or injustice. They will show fight courageously if there is anything like an equality of forces. What they lack in size they make up in a dexterous and determined use of their bamboos, tough sticks about eight feet long, and sufficiently heavy to give a very respectable blow. They often do good execution with these in the fights between themselves and the other diggers.

When, however, a Chinaman finds himself unable to cope with his oppressor in this way-, he resorts to his tongue, which is for ” John” an equally effective weapon as for a woman.

One feature of the Chinese character comes out in the working of these gardens, which places them in a fine light as compared to Europeans. Although a considerable number usually work in partnership, we never heard of a case in which any difficulty arose among them either as to the working of their gardens or the division of money. Old diggers, to whom we have spoken on the subject, have informed us they never heard of a case of this sort. They appear to have no quarrels among themselves when working in partnerships, or as the digging phrase is, ” going mates.” No actual partnership exists, and when they see fit, from the breaking out of other rushes, or other causes, some will leave the concern.

We judge from this that a degree of honesty and fair play characterizes their dealings with each other, far superior to that found among Christians.

The same remark holds good of mates in gold claims. Although they may have a commissioner’s case with neighbouring compatriots, as to ground, etc., we never knew of a case in which the mates in one claim had any legal proceedings.

While on this subject we cannot refrain from remarking that, in our opinion, the English are apt to form too low an opinion of these remarkable people. Of their superior skill in gardening we have spoken. All the world knows their characteristic patient and industrious attention to every minute detail of their manufactures, and the ingenuity they display.