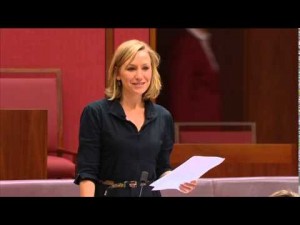 Senator Waters in the Red Chamber

The frurore in the Australian Senate surrounding Larissa Waters question to George Brandis regarding his government’s response to the Pope’s encyclical on Climate Change is confected nonsense, but rich with layers of irony and hypocrisy: particular favourites of The Cross.

Firstly, the Government’s high dudgeon over reference to its religious make-up. To be clear, Senator Brandis, representing Prime Minister Tony Abbott in the Senate said “your reference to the religious beliefs of other members of this parliament is disgusting” in his direct answer to Senator Water’s question. This is the same government that boasts its religious make-up when it wants to win a few Brownie points on the hustings or oppose same sex marriage. It is also the same government that regularly describes secular politics as an attack on religious beliefs. This is the same government that continuously conflates the word Muslim and the word terrorist and says that “ordinary Australian’s are uncomfortable with the Islamification of Australia.”

Secondly, and not too far removed from the first, it is the government’s feigned offence over any form of criticism. Brandis himself has supported the repealing of anti-racism laws on the grounds that free speech protects the right of radio commentators and newspaper columnists to whip up race hatred. The irony that he supressed the publication of 5,000 submissions to his own commission of inquiry into the proposed changes to the law only adds to the layer-upon-layer flavouring of this whole affair. His arguments that political correctness has become a tyranny and that people need to man-up and learn to take the criticism that comes with robust debate do not seem to apply to himself or his own side of politics.

The fact that Senator Canavan called Senator Waters a “bigot” while she was asking her question resonated with the Speaker’s admonition that references to religion of Senators are out of order, indicating that the government had prepared its response. Even that discipline, though, did not hold for more than a fe 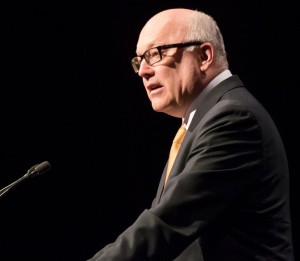 w moments with Senator O’Sullivan asking Senator Waters “You are not married, are you?”, allowing her the luxury of pillorying the Conservatives in the media for the next 48 hours as a bunch of sexist Neanderthals.”

As they say in AFL, that is surely playing the man and not the balls.

The real irony, though, is the question that Senator Waters asked of her fellow Queenslander and which he studiously avoided answering, and that is whether the Catholics in the government will shift their strident anti-climate change position in response to the Pope’s admonition to do so.

So much for the few moments in the Senate that have made it into international pollie-watching folklore as another example of those colonials down-under behaving badly.

It is incidentally ironic that the Catholic Church in Australia has deep roots in the Labor movement. Under Mannix in the early years of last century it was a radical supporter of the Irish and radical labour, much to the chagrin of successive popes. The good looking Dandy Prince Edward (later the Abdicator) thought Australian political officials socialist, Irish boors. Mannix begat SantaMaria, Santamaria begat the DLP and the split begat 23 years of protestant Menzies. Menzies begat the protestand Howard who begat the Abbot and two Bishops who currently rule over us and here endeth the lesson that there is a complex an multifaceted relationship between the Church and State in Australia.

The finely layered contradictions of the whole scene though, go all the way to the Vatican.

The Pope is only falling in line with a broad theological movement forming around the teachings of Thomas Berry and the broader spiritual movement to nurture the ecology that nurtures us. That the institution of the Catholic Church is playing catch up to the ecological movement is ironical in itself, but it is not unusual. The Church has regularly burned heretics in one generation only to sanctify them later.

There is a deeper problem here and that is that climate science is not a belief system. The notion that we do not have to believe in Climate Science is a notion of the religious right established partly out of a naïve use of a word that means more to them than it does to atheists and agnostics but partly as a way of co-opting the argument and shifting it out of the realm of fact into the realm of theology.

The danger for the environmental movement here is that it will find itself caught between the well-meaning faith-based nurturers and the hard-headed scientists. This has always been a delicate juggling act, balancing the support of its homeopathic anti-pharmaceutical alternative wing and the scientific community. Unless it extends a roomy umbrella (“broad church” is not appropriate here) to that diverse community it will not get the clout it needs to keep the Brandis’ of the world at bay, but if it does not hang onto its hard-nosed secularism it will get drawn into the maelstrom of competing beliefs.

It is not that hard. It could take a leaf out of the supremely pragmatic an opportunistic institution now known as the Roman Catholic Church. The Church has never been as anti-science as the anti-theists would have us believe, but it has never been able to accept scientific argument as evidence in its own right. Galileo was not imprisoned for his views that the Earth went around the Sun but for calling the Pope out on refusing to acknowledge it as a scientific fact. Gallileo was a perceptive observer of the heavens and a poor observer of the political realities of his day. Then, as now, the Church was more immersed in politics and protecting its own institutions than it was in serving the lord.

Pope Francis (named after one of those heretics, later sainted) genuinely wants theologians to consider humanity’s responsibility for nature in crafting their messages for their flocks but that is in part a search for relevance in an Institution that has made itself loathed for its abuse of the most innocent in its care.

Having endangered its favoured position as a welfare agency of the State it has to redesign its role somehow. Stewardship of the environment is as good a next stop as any.

The Cross sees a significant problem here. Given the poor record the Church has for the most vulnerable in its flock, what hope can we have that it will do any better by the even less vocal ecology which it now claims to care about?

Unfortunately for Pope Frank, his Aussie flock presents a special conundrum. The Australian government does not believe in Science and being in the pay of Coal has to choose between the cash in the hand or the pennies in heaven. So far the bird in the hand is winning.