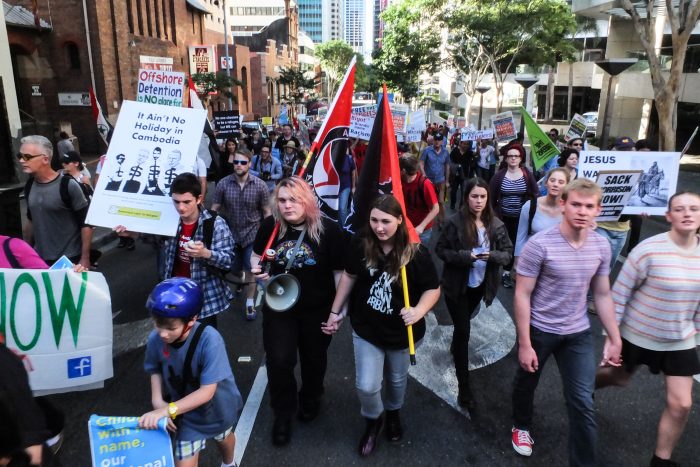 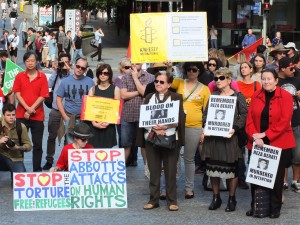 On February 17, the guards of the security company, G4S, at Manus island, backed up by the PNG police, unleashed a murderous rampage against the detainees with sticks and machetes murdering Riza Berati and injuring 77 other asylum seekers.

As a part of the world refugee day, refugee rights groups rallied against the government at the King George Square, stipulating respect for refugee rights and the immediate closure of the Manus Island and Nauru offshore detention centers.

The protestors held Prime minister Tony Abbot and Immigration minister Scott Morrison responsible for the appalling treatment of asylum seekers, by ranting “Morrison, Abbot, Shame on you, refugees are people too.”

While Phil Monsour, a singer and a song writer, chanted “Who killed Reza Berati?,” in between his song, the protestors replied in chorus “The Australian government and G4S”.

He received the loudest cheer from the crowd after he sang the song ‘Black fellow, White fellow’, which was proposed as an alternative national anthem.

Raymond Ferguson, the national secretary of the Australia democratic people’s republic for friendship and culture society supported the refugees by exclaiming that the activities of the government in Nauru and Manus island were barbaric.

“The Australian government must shut down the detention centers and bring the refugees back to Australian soil, so that their legitimacy can be due processed in accordance with the UN convention on human rights of refugees,” he said.

“Australians fear boat people because our forefathers came as boat people and took over this country from the first people, hence we fear that people who are coming by boat will take over our nation,” Mr. Andrews said.

Ros McLennan, the assistant General Secretary of the Queensland Council of Unions, and a mother of two expressed her concerns about the treatment of women and children on the Nauru and Manu islands detention centers.

The greens made an appearance, promoting that the only way to help the refugees is to make sure they don’t feel the need to board a dangerous boat in the first place, by setting up safe official ways for them to seek asylum in Australia.

Meanwhile, the members of the Trotskyist platform handed out flyers to remind the public, about the greens coalition with the Gillard ALP government without demanding the slightest commitment from the government to ease the war on refugees.

Amnesty International has accused the Nauruan government of human rights violations, after repeated requests to visit the island by the UN human rights inspectors and Amnesty international were rejected by the Nauru justice minister David Adenga.

Even though the government refuses to grant access to journalists or human rights organizations, that have tried to report about the conditions in these offshore detention centers, the ABC recently reported the assault of children by the Nauru guards.