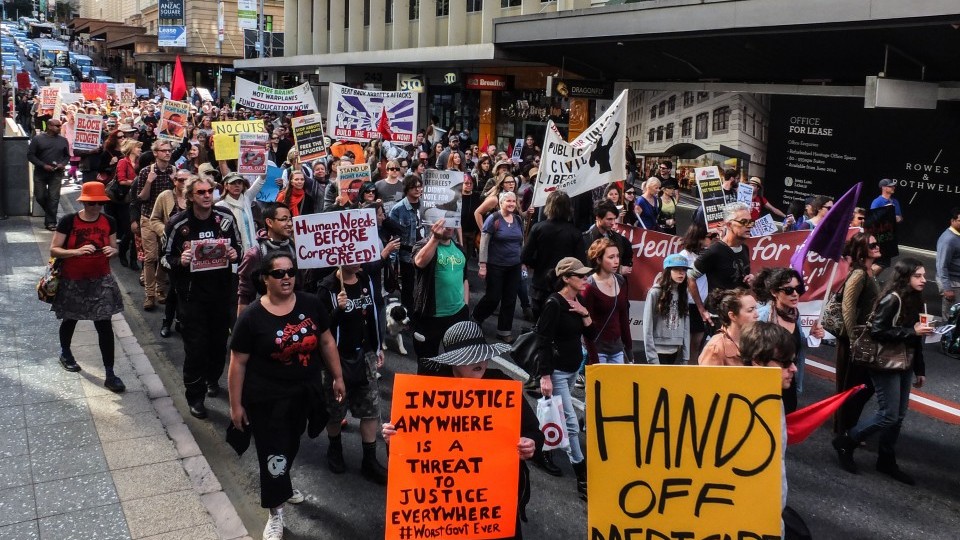 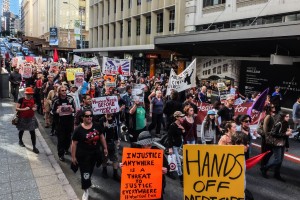 Photo of the protest march by Sam Navin.

One day before the senate sits to vote on key budget measures proposed by the Liberal National Abbott government, thousands of Australians all over the country,  protested to bust the budget.

In Brisbane, over a thousand men, women and children took to the streets yelling chants such as “ Stop Corporates getting fatter, workers rights matter,” and “ Stealing from the sick and poor, send this budget out the door”.

Treasurer Joe Hockey’s budget has slashed funding for public hospitals, resources for Aboriginal services, public funding for universities, payments  for unemployed people under the age of 30 for six months in year, and ‘re-assessment’ of eligibility for people on disability pension.

Representing the aboriginal community, Sam Watson, an aboriginal elder addressed the masses by commencing his speech with a moment of silence, recognizing the elders of the land and the cause for action.

“Abbot and Hockey have stolen money from our resources and we’re going to fight back for it,” Mr. Watson said.

According to recent polls more than 65% of the population are against the budget and are hoping for the senate to block decisive sections of the budget and to target the deeply unpopular and unfair elements in the budget. This will force the Tony Abbot government to either agree to the amendments or witness the defeat of the entire budget with the consequential shut down of much of the government.

Peter Simpson, the Queensland branch secretary for Electrical Trades Union, assured the people about the role of the trade unions in the community and reassured the people that they were fighting for the rights of the common man.

“If anyone thought this wasn’t a class struggle, you’re kidding yourself ,” Mr Simpson said.

“Class warfare begins with a fight against Abbot’s budget attacks and should move on to demand free public healthcare, increase in funding for public hospitals, abolition of anti-strike laws, removal of tertiary education tuition fees and increase in low rent public housing,” he said.

“ I grew up in a society where the strong and powerful, looked after the weak and needy.

“ If this budget passes through, it is the end of our culture.

“Start getting involved in these fights so we can beat Abbot and his cronies.” 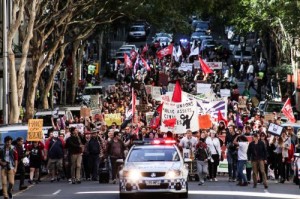 In the university sector, the biggest reform is the deregulation of university fees, which will allow universities to determine the cost of a degree.

According to the architect of HECS loan system, Bruce Chapman, this could result in the cost of a degree tripling, leaving students with debts of more than $120,000. Thus, for many, this debt will become a form of financial servitude.

Duncan Hart, representing the National Union of Students, illuminated the mass with the knowledge that this plan was a massive Americanization of the education system.

“The Abbot government has thrown away $24 Billion on fighter jets and say that they can’t afford education. This is despicable because these hypocrites got their education for free and their children and getting it for free, but they want us to pay and fall into debt,” Mr Hart said.

“We ordinary people need to get out there and make Abbot sweat,” he said.

Treasurer Joe Hockey’s budget, will also be cutting funds for public hospitals and this will make people pay a $7 fee per person for each doctor’s visit.

According to the Queensland nurses union, Australians will end up with a more expensive American style system of privatized health care, where if you don’t have the money, you don’t get the care.

Dr Brian Senewiratne, a consultant physician, conveyed that the introduction of co-payments will harm those who require care the most – the elderly, the poor and those with chronic diseases.

“ I was going through the budget last night and for the first time in 40 years as an Australian, I felt ashamed. I love Australia, I love Australians, Australians are clever and one of the nicest people in the world but I can’t understand why 21 million people can’t select 100 people with brains to represent them in the parliament,” Dr Senewiratne said.

“ Consider the situation of a poor mother with 4 children. If one child catches pneumonia and then unfortunately the rest of them contracts it from that one, which is inevitable. She has to pay, $7 per child and what if she doesn’t have that money? What if, the situation becomes more serious and they send her to Princess Alexandria Hospital where each bed costs $700 per day?,” he added.

Adrian Skerritt, from the Cloudland Collective encouraged the people to pressurize the government by claiming that such rallies have demonstrated that the budget is a horrible lie and he estimated that if an election was held next week, the polls demonstrate that Tony Abbot and his government would be history.

“ If the rich don’t like a law, they buy an outcome to suit their selfish interests,” Mr. Skerritt claimed.

“I worry that change in the government will not be enough. Unless we do something about a more profound change, nothing will progress. The task is to organize a society that does not have this shocking levels of inequality,” he said.

Economist Prof. Richard Holden argues that Australia does not have a debt crisis. The Commonwealth net debt is about 11% of the GDP, the third lowest in OECD (Organization for Economic Co-operation and Development) where the average is 50%, and low by historical standards.

Jason, a trainer, believes that the whole debt crisis is an elaborate illusion to mislead the people, and that the LNP is seeking to change the balance in favor of capital investment at the expense of public health, education and the standard of living of working people and their families.

“My message to the people is to take a good, hard look at yourself. The Howard government put a lot of people in debt, so now people have mortgages to pay. Families require a two income family structure to survive. I know that most people don’t want to risk their job by joining a fight against the government, but if this keeps going on, they’re going to lose their jobs anyway.

“In a two income family, if one loses their job, they’re going to suffer. They’re going start losing their houses, they’re going start finding it harder to get jobs and it’s going to affect their kids education. So people need to examine their situation, they need to stop being selfish and self- centered and look at the big picture instead of branding protesters as troublemakers or hippies,” he concluded.