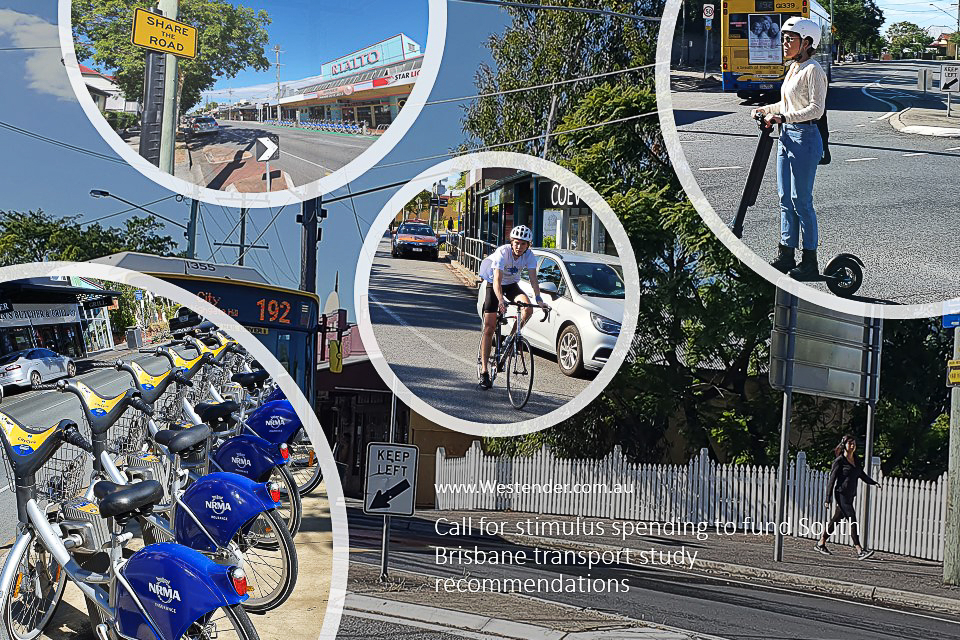 In November 2019, the State Government released the South Brisbane Transport and Mobility Study Report. The announcement to undertake this study was made by local member Jacki Trad during a campaign forum organised by Kurilpa Futures in 2016. Kurilpa Futures says they have considerable interest in the content of this report and the group is now planning to engage the local community in some discussions about its implementation.

The report focused on active transport for the Kurilpa Peninsula and inner south suburbs.

A Kurilpa Futures spokesperson said that it seeks to redress past failures to integrate transport and mobility issues with the rapid and numerous high-rise developments.

“The primary cause of most of the transport and mobility challenges in the peninsula is rapid and poorly planned development and the resulting population growth,” Kurilpa Future’s spokesperson Maurice McCallum said.

The study’s report has 40 recommendations to address transport issues, with a strong focus on active transport including walking, cycling and public transport.

“It is essential that these recommendations do not sit on the shelf and that Council and the State Government work together to ensure implementation,” Mr McCallum said.

The Kurilpa Futures group says it wants to see tangible actions and believes that the following critical recommendations are a good place to start:

Mr McCallum said that South Brisbane has a long history of state members and local councillors who facilitate and participate with citizens and their community associations to promote inclusive change in our neighbourhood.

The Westender asked the local State and Council members for their responses to the report and to the priorities identified by Kurilpa Futures.

Member for South Brisbane Jackie Trad told The Westender that improving transport is a critical issue for the community and will require all levels of government to work constructively together.

“The first step was getting a plan that our community supports,” she said.

“That’s why I secured $600,000 of State Government funding for the South Brisbane Transport and Mobility Study.

“The study ensures the South Brisbane community is central to identifying the priorities”.

Ms Trad said that it is now up to State and Local governments to work with community stakeholders – including Kurilpa Futures, Queensland Walks and Bicycle Queensland – to develop a holistic transport plan to address these priorities.

“I support all the measures identified in the study, including those highlighted by Kurilpa Futures as priority projects.

“By working together, I believe we can deliver a plan to improve transport options in South Brisbane that integrates infrastructure and development to meet the growing needs of our local community,” Ms Trad said.

Jonathan Sri, Councillor for the Gabba Ward said that he is strongly supports transforming major road corridors to have a stronger focus on public and active transport.

Cr Sri has advocated for some time for a new City Cat terminal for the western side of West End.

“The recommendations in the State Government’s Transport and Mobility Study were generally pretty good, but as always, a key problem is actually securing funding. A finding in a State Government report that we need something is not the same as actually getting money allocated in the budget, and I remain of the view that we need to increase infrastructure charges on big developments so we have enough revenue to pay for essential public infrastructure,” Cr Sri said.

Kurilpa Futures says that it would like to see Brisbane City Council spend some of its COVID-19 stimulus money on implementing the report’s recommendations, along with infrastructure charges already obtained from recent development projects.

Kurilpa Futures says it has collated all the recommendations from the report and plans to hold an on-line webinar on Saturday the 23rd of May from 4.00pm to 5.00pm to discuss the report’s recommendations and hear community feedback on the priorities.

For more information on the report see HERE