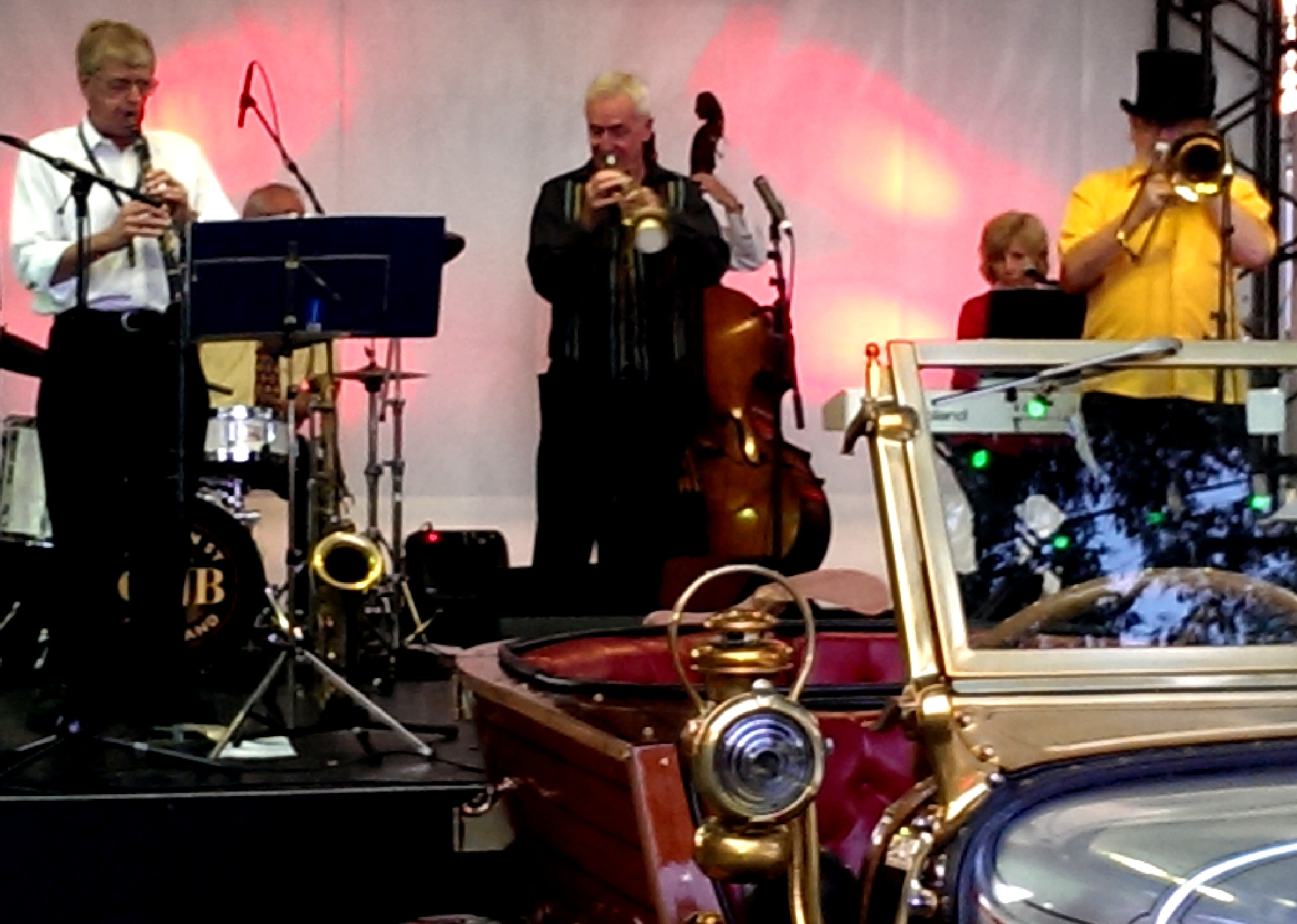 The car may be the star of the show but the don’t-mention-the-war Vulgarians come a close second.

Villians are often the best characters in musical theatre. Chutty Chitty Bang Bang’s Child Catcher and Vulgarian royals steal the second half of the show with style, sizzle and every vaudeville trick in the book. The dimwit duo of the Vulgarian spies thread their hilarity across both halves providing a string of one liners that brought the house down in peals of laughter time and time again.

The dogs that destroy the heroic attempt by Caractacus Potts to buy the dream car after which the show is named provide a dramatic wormhole connecting the fantasy of theatre to the natural cute-factor of furry animals that elicited cries and sobs from the audience.

Belly laughs were more the order of the day from a handful of simple theatrical tricks depicting Chitty’s first outing to beach. The heartfelt enjoyment of play with technique proves that post-modern self-reference is no longer soley the domain of the intellect, we love it now with our souls and bodies. So as not to spoil it for those who go to see the show all I will say is that it is hard to imagine the surprise and delight that a simple line of actors in rugby gear can provide.

The simple lines and stunning swirls of men and women who support the cast of Chitty Chitty Bang Bang is remarkable. That this show can afford to cast such fine talent in the chorus line, and provide the stunning choreography and performance upstage is an indication of the depth of talent in Australian theatre and the creative detail of the production itself.

You could see this show two or three times and still not have caught all the drama and action going on in some of the busier scenes. The lolly shop and the Baron’s birthday Brazilian bash stand out as two scenes that a new generation of theatre goes will download and put on repeat to milk for detail.

This little black duck is not familiar with the movie and so is unqualified, dear reader, to provide a scene by scene comparison. One suspects the camp patter of the Vulgarian spies has become more overt over four decades and the sizzling seduction farce of the Baron and Baroness much more risqué than they were when Mary Poppins was still new. Of course, kids in the sixties did not have the exposure to bustiers, garters and nipple-tweaking pillow-talk that today’s kids consider dull and boring old-fart filler.

Shane Bourne’s Baron is dangerously nonchalant with his throw away lines that neatly offset the bewitching Baroness. One suspects he may have been a tad difficult to direct. Jennifer Vuletic weaves the neuroses of the Baroness into a finely crafted and explosively energetic character who will become an icon for the show itself.

Tyler Coppin as the child catcher will create a new class of nightmare. He weaves all the evil intent of Danny DeVito’s Penguin with a spiderlike grace that loops lightly through mind and memory, sewing seeds of discontent and a longing for darkness. Some people will simply find him terrifying, others terrific. Certainly a lot of the ladies and more than a few of the men commented on the way his leggings offset a lovely set of calves and well-built thighs.

The saccharine sixties are still present in the goody two shoe Potts family who dominate the first half using a mould that has been broken for ever by Brad and Janet in the Rocky Horror Show. The kids are disarmingly cute and the male and female leads suitably charming. David Hobson slips easily from great moments of pathos to light hearted dance numbers. Rachael Beck is as Truly Scrumptious as her character and not really stretched by the material.

The sets are stunning. The European town squares, castle and sewer provide a gothic contrast to the rustic and steam punk England so well characterized before the intermission. The scene below the sewer and the child catcher’s arrival in the midst of town are images that will be last beyond the tunes and storyline of the show itself.

Chitty is such a large car that she renders the Lyric theatre stage small. The encore requires the whole cast to assemble in the first metre and a half so that chitty can strut her stuff. She is the most expensive stage prop in the history of British Theatre!

It is the longest running musical ever to play at the London Palladium and was nominated for three Olivier Awards, five Tony Awards, ten Outer Critics Circle Awards and four Drama Desk Awards. Only in Brisbane until December 22 this is a must for musical lovers and a delight for anyone who can afford it.