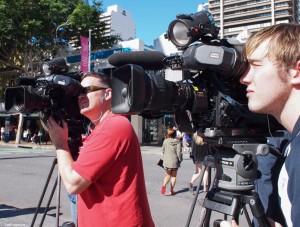 My first attempt at citizen journalism was my June profile of the Griffith electorate.

Reprinted with permission from No Fibs.

Since then I have spoken with staff in both Kevin Rudd’s and Bill Glasson’s local electorate offices and sent emails with my details seeking interviews or response to questions.  Electorate staff have been polite and helpful and have promised to pass my details on to their candidates. I have learned that follow-up calls are important and I will keep trying.

As the PM, Mr Rudd has constant national and local coverage, and is supported by his own media team.  Dr Glasson likewise is getting considerable coverage in the Courier Mail and other local media and has staff and volunteers supporting his campaign. Both have Facebook sites and Kevin Rudd is also active on Twitter.

Geoff Ebbs (Australian Greens) and Luke Murray (Katter Australia Party) have been happy to talk with me, and I provide my reports below.

This event sold out within weeks of being announced

I have been in touch with Palmer United Party (PUP) candidate for Griffith, Karin Hunter and I’m keen to talk with her in more detail soon.  Karin was brought up in PNG and says in her PUP profile that she was attracted to the party because of its “… sensible and practical approach to border protection and their refugee policy”.  She, like Luke Murray, has no support staff but has promised to give me some time when she can. Her profile appears on the PUP website, and while not a user of Twitter, she does have a Facebook site.

This process of seeking interviews is teaching me persistence and well as patience, and I hope to have more profiles over coming weeks.

I will definitely be attending the planned “meet the candidates” event in South Brisbane on 6 August at 7.00am – candidates will be interviewed live on ABC 612 by Steve Austin.