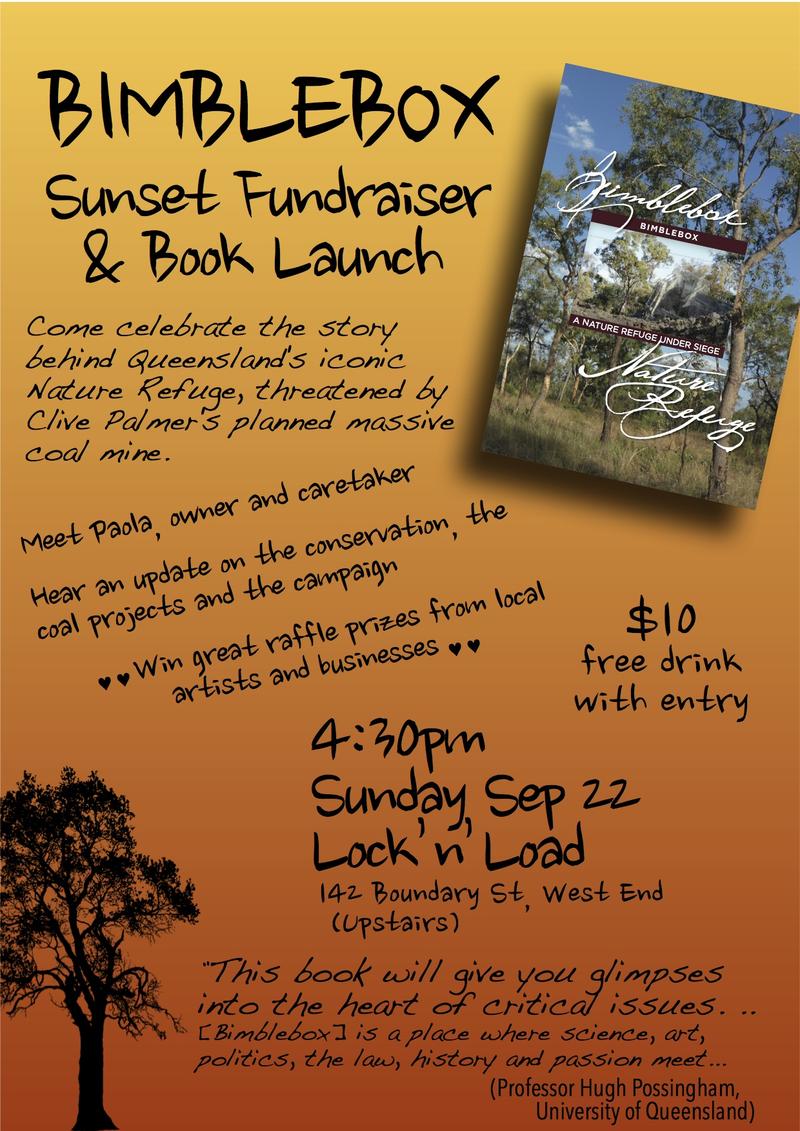 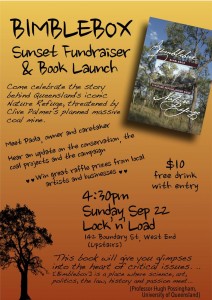 Get along to Lock n Load 4:30 on Sunday Sept 22 to support the Bimblebox campaign

Clive Palmer ran his election campaign on a Mister Nice Guy platform that failed to mention one of the biggest environmental battles of our time, the coal miners versus the farmers and environmentalists in the Galilee Basin.

Palmer’s vast China First coalmine was given clearance to go ahead by the Newman government during the election campaign. Now the federal environment minister has the right to sign off on the project.

It is only one of a number of coal mines in the Galilee Basin, however.

Gina Rinehart’s Alpha Coal is in court this week to argue against Coast and Country Association of Queensland’s objections that the impact on water has not been properly assessed.

Local farmers and community group Coast and Country Association of Queensland claim that the evidence for impact on water has been swept under the carpet and only  the “best case scenarios” presented as likely outcomes of the mine impact. The objections will be presented to the court by a Melbourne-based QC, who has given his time for free (no Queensland barrister was prepared to put their neck on the line opposing coal mining companies).

You have the chance to get involved in this court action along with hundreds of other opponents of the expansion of coal mines at the expense of farm land and water this Wednesday,

When: Meet 9AM sharp, Wednesday the 18th September. Stay longer to hear landholders giving evidence in the court room from 10AM.
Where:  Meet Outside the Land Court of Queensland, 363 George St, Brisbane CBD
What: A respectful but playful act of solidarity with the landholders and other objectors to the Alpha mine to help attract media attention and show landholders our support.
Dress smart. Whether you’ll be attending the court hearing afterwards or not.

Who: Lock the Gate Alliance is coordinating the event with support from a number of groups. Facebook event here: https://www.facebook.com/events/235457349938248/

You can hear local environmentalist, Jo Bragg on the ABC Radio discussing the challenge at http://blogs.abc.net.au/queensland/2013/09/cost-of-appealing-planning-decisions.html

Many Westenders are actively involved in the case, or in groups that have been mounting long term opposition to the ripping up of the Bimblebox Nature Reserve to build the world’s biggest coal mine, but the action comes right to the middle of Boundary St this Sunday with a fundraiser at Lock ‘n Load.