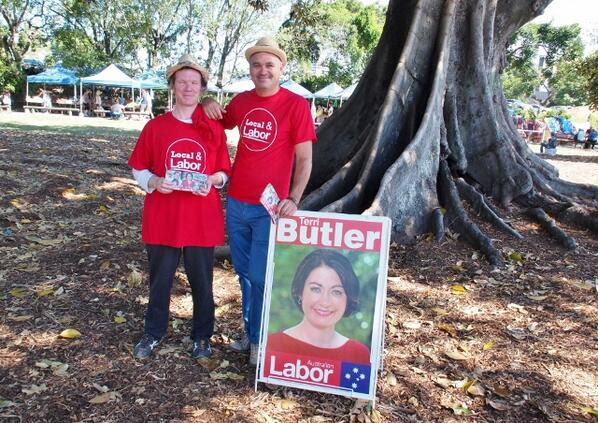 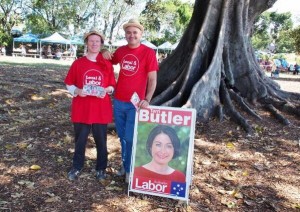 Westender’s Darren Godwell on the hustings with fellow Butler supporter

Last weekend, prior to the preselection of the ALP and Greens candidates I wrote “Glasson’s gladiators already waving inanely from behind their bulging bags of helium across the electorate, the ALP is keen to get out there and be seen.”

At the time, the colour to be worn by the ALP was not clear. Rudd had favoured white with our RUDDY this and that in red ink, local member Jackie Trad favours Green in most of her materials.

Now that all parties are preselected and out and about, it is with some relief that I can report the ALP has selected red to represent its left wing, grass roots selection, providing the standard and meaningful choice of red, blue and green for voters who find team colours easier to deal with than policy positions.

With a left leaning Labor light a small l liberal and an environmental Green, we can expect the policy positions to be equally clear cut. Whether or not the mainstream media will see fit to report it that way is another matter.

Hopefully it gives the people of Griffith the opportunity to get out and exercise their democratic muscle in a meaningful manner.

We here at Westender certainly look forward to reporting on the shenanigans as they unfold.