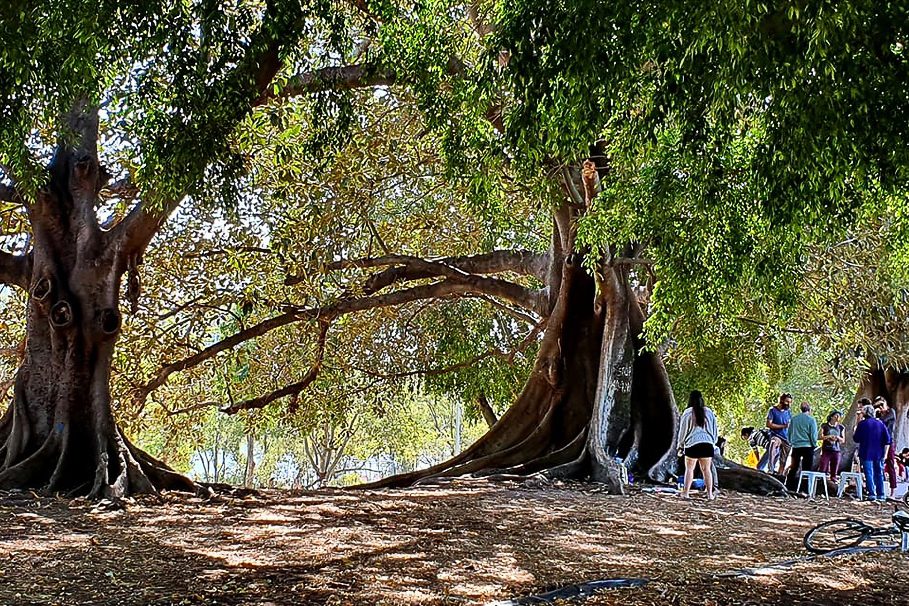 Long before the first city walls were built 6,000 years ago to keep populations captive, open spaces had been for millions of years the meeting places and playgrounds of natural communities of families. Later, independent and active minded people re-introduced open spaces into cities to recapture freedom of movement and contact.

Athenian Agora and Stoa, Roman Forums, the Obis of West African townships, all were the cultural custodians and guardians of their re-emerging community life.  It is these places where people gather informally to discuss shared dilemmas and exchange views on appropriate social policies and constraints on ruling elites. Do you remember the old King George’s Square in Brisbane with its ease of style, space, organisation and alternation of shade and sunny patches? We may have lost it, to create new commercial opportunities and barren wastelands of concrete , but only a couple of hundred metres away Post Office Square- the focus of metropolitan communication -survives as a cheerful meeting place for local workers, shoppers, tourists and old friends meeting to renew their sociability.

The battle for open space in our cities is between pomposity and grandiosity like Tiannmenmin and King George’s Square, and the easy conviviality of London’s Trafalgar Square and Piccadilly Circus and the informality of Brisbane’s Old Botanic Gardens, and Riverside’s Orleigh Park .

Locally we can celebrate the gentle, almost shy, welcome offered by our own relatively new Bunyapa Park at the corner of Vulture and Thomas Streets, harmonizing its old piano, new barbecue, and modest performance stage, with spaces for sitting on the grass.

There is a real danger that in the likely reaction against health risks of unlimited contact there may be a reaction against such already scarce networks of small public open spaces and meeting places. Instead we should seize the opportunity to re-enforce its role and the safeguards it provides to homes and community life.

While playing fields are a great source of public open space, and there is every reason to safeguard their continued widespread distribution and access, they also focus on the formal and competitive aspects of community life. They offer little conviviality compared with the patterned randomness of small incidental open spaces where people can naturally pause and gather to discuss, for instance,  the merits and vices of the civic organisation by which they are regulated. These small incidental spaces form the natural focus for all our social activities – dwelling, play, learning, practice, contact with nature and pubic reflection and debate.

Devotees of urban history will recall the ringing condemnation of urbanist Jane Jacobs nearly a hundred years ago of the concentration on huge, unsafe, ill regulated pubic parks, which are more monuments to ruling grandiosity than to humane assembly.

What we need are the familiar, endearing, relaxing and casual meeting places around which dwellings may group, shops may be related, water ponds may provide refuges for wild life and children may safely play. These spaces can snuggle along riversides, line local roads,  command magnificent views over the sweeping city,  and proffer welcoming and casual seats equally welcoming at different times to lovers, groups of all ages, and pausing dog walkers.

In forthcoming post-coronavirus reconstruction, we need to cluster our communities to have more and smaller spaces. Re-purposing space will be the necessary theme – the redundant suburban road space with which Queensland cites are afflicted and indeed any unused or unused public space.

However, in inner suburban areas like the Kurilpa Peninsula, West End, and Woolloongabba, we have to accept the natural flux of land uses and occupations that all such wonderful civic reception areas and inner city locations  offer.

City Plans already propose a tripling of the existing population of South Brisbane and Riverside over the next twenty years, and while this can probably be reduced by rational review, it is certain that we shall have thousands of new dwellings in this area. It is imperative that each single substantial development should provide generous extents of sociable pubic space, amounting to not less that 20% of their total extent and networked into a green matrix of humane movement. Health demands this. Without this, democracy will continue to morph into populist self assertion. Children’s play will be prone to bullying rather than conviviality. Our crucial contact with nature will be transformed from daily contact to professionalised expertise, and the different age groups of society will lose contact and sympathy with each other.

“Things fall apart, the centre cannot hold” unless it is an amalgam of communities.

A happy chance has produced a plan which could form the evolving basis of such an approach in the work of local Landscape Architect, John Mongard who very deservedly was awarded the Award for Excellence in Community Design in 2016 by the Australian Institute of Landscape Architects for his Green Space Strategy for West End. Like all worthwhile strategies, it is rich and various but its essentials lie in re-purposing redundant road space for public open space, linking scattered fragments of riverside and existing parks and establishing this inner suburb as a series of community spaces enlivened by public use and natural life.