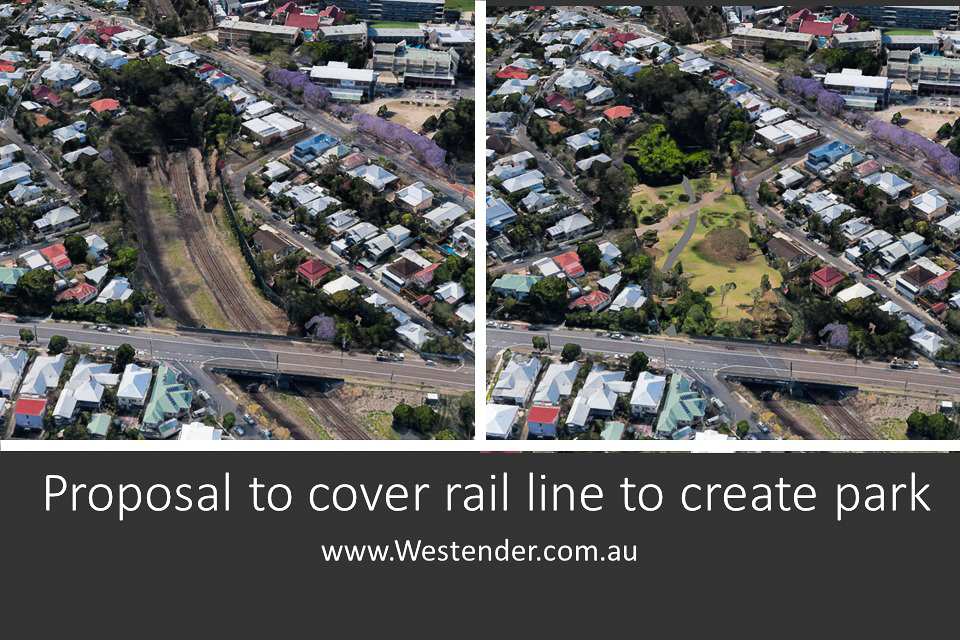 His idea – to cover the stretch of train line near Gloucester St and Frith St in Highgate Hill with precast tunnel segments to create a new public park.

A station was once situated on the site, Cr Sr said, and so it has a section of public land that is wider than along other train lines.

Covering the rail line would create a 1.1-hectare public park, flat enough to kick a ball or play some cricket, Cr Sri said.

“Covering over train lines is a cost-effective way to create new public parkland in inner-city areas where land is in short supply and has the added benefits of reducing noise and air pollution and improving pedestrian connectivity.”

Cr Sri says that we now have the technology, the resources and the engineering skills to cover rail line in this way.

“If we spent $2 to 4 million covering the train lines near Gloucester St at Highgate Hill with precast tunnel segments, we could create $20 million worth of public parkland in an area where green space has not kept pace with new development.”

The proposed park could serve as a green spine and pedestrian link, “…providing a quiet vegetated retreat from the busy hospital precinct”, Cr Sri said.

“It could include sports facilities, a playground and a dog off-leash area, as well as plenty of shady trees and natural wildlife habitat.”

Cr Sri estimates that at a cost of $3 million the project could create public parkland with a value of up to $20 million and could be the first step in a series of linked parks that could improve pedestrian connectivity.

Cr Sri says the project would also have the potential to cut noise pollution for residents.

“A lot of residents are negatively impacted by the noise and air pollution from coal trains running through our residential suburbs. This proposal allows us to fix those issues while also creating new green space and providing direct pedestrian pathways that avoid the main roads.”

“Everyone seems to agree that we need new public green space in the 4101 postcode. This is one of the cheapest ways to create it without displacing other land uses, and it could become a model for other neighbourhoods too.”

Cr Sri says that currently there are no public playgrounds within one kilometre of the site.

“I’d love see the new park include a massive playground that local families can walk to without having to cross busy roads,” he said.