The Cross was sickened, again, last week by the torture and brutality of the Holy Sisters and local priest Father Reginald Basil Durham at St Joseph’s orphanage, Neerkol, near Rockhampton.

This sick rapist and soul thief groomed his victims from childhood, so he could abuse them at will – further twisting the knife by demanding their apology and gratitude for his absolution in the confessional. 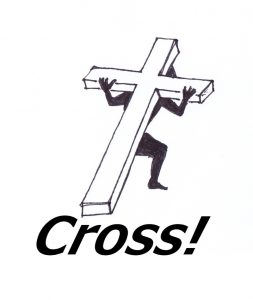 The institutional brutality of power-crazed cowards in the Christian welfare sector over the last sixty years has been exposed time and time again, now en-masse thanks to this Commission. We are all sickened. The danger of institutional religious power has been revealed. An institution that became so obsessed about survival it paid its minions with the bodies of its most vulnerable members.

And what did those minions deliver? Money.

Holy shit, holy church – that is fully Despicable <my capitalisation>. Your apology of April 22 simply does not cut the mustard.

Never has the need for secularism been more obvious.

A secular government need not repress religion, it simply governs the limits of religious power in secular society. It makes sure that the religion is not abusing its unique power over the faithful.

A secular government would never put chaplains in charge of teenage welfare, for example: Even if we were not at the tail end of the hearings of the Royal Commission into child abuse.

On the other hand, our deeply Christian governments cannot help themselves when it comes to locking people up and finding unusual ways to torture them. Our Federal Abbot and two Bishops take particular delight in posting the victims of our failed wars to tropical islands and leaving them standing behind wire, in the sun, on hot rock, while bitter locals look on with fear and loathing.

We have not come far from Van Diemen’s land. … or Palm Island. Concentration camps were not invented in Germany.

At the state level, our VLAD laws are still in place. Those laws lock members of Criminal Gangs in solitary confinement in tiny concrete cells, in the middle of a wire cage, in the Woodford Detention Centre. Wearing pink overalls and chains convicted members of Criminal Gangs are allowed out of the concrete cell, into the wire cage for an hour at a time, when no other prisoners are outside.

Criminal Gangs are defined as a group “declared to be a criminal gang” by the Attorney General. That makes it pretty easy to find out what organisations are criminal, we simply ask the AG.

That law also makes it illegal for any members of those criminal gangs to meet in public in groups of three or more, or to wear clothing in public that identifies them as members of their gang.

I get a wry satisfaction at the thought of a freshly-elected, future Queensland Attorney General declaring certain Christian sects to be criminal organisations and parading a few nuns up and down George Street in pink. It would be outrageous, of course! It is an outrageous law.

But it might help address the social imbalance caused by giving the churches tax-free status and the most lucrative welfare contracts.

Ponder on it as you next take up your cross to bear. May humour leaven the pain.