Yep. Currently living in an East Brisbane sharehouse with six people and four chickens. Until early 2014 I lived in West End on the corner of Montague Road and Vulture Street. Before that I was living in the heart of Boundary Street next door to Charlie’s Fruit Shop, and before that I lived on Dornoch Terrace opposite the Highgate Hill Park.

I was born and raised in Brissie, and grew up in West Chermside.

In what ways do the policies and principles promoted by The Australian Greens best represent your personal values? 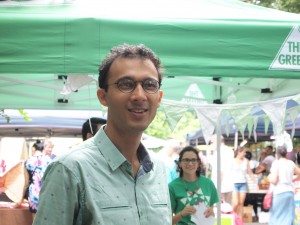 The Greens’ four core pillars are social justice, grassroots participatory democracy, peace and non-violence, and ecological sustainability, which align closely to my values. I was first drawn to the Greens because they stood firmly against racism, sexism and government human rights abuses, and because the party had a healthy culture of respecting and valuing music and the arts.

I have a strong interest in democratic reform and cracking down on political corruption, so policy-wise, the Greens were my natural home. I also like that the party encourages open debate and that there’s not too much top-down control of candidates.

I think my previous work as a mediation facilitator will equip me to navigate (and hopefully change) the adversarial us-and-them culture which seems to dominate mainstream Queensland politics. I’ll be able to negotiate and cooperate with other councillors to achieve better outcomes for residents. Working in dispute resolution has also given me a strong sense of the importance of listening. Residents deserve to be heard, and to have their concerns taken seriously.

My law degree has given me a thorough understanding of our current legal and political system, including insights into the kinds of changes we need to make to reduce political corruption, while my significant volunteer experience as a community organiser and activist has given me the skills to mobilise residents when governments and city councils ignore their needs and perspectives.

My work experiences as a radio journalist, writer and poet will assist me in communicating local policy issues to the electorate in a more effective and engaging manner.

My experiences as a cyclist have made me keenly aware of how urgently we need to upgrade inner-city cycling infrastructure to make pedestrians and cyclists safer.

My work as a musician and events organiser has given me a strong understanding of what’s necessary to foster a vibrant local music and arts scene, and of how we can manage and improve our public spaces to maximise their value to the community.

But perhaps most importantly, my experiences as a youth worker and long-term renter working in low-paid, precarious jobs has given me a clearer sense of the challenges affecting marginalised Brisbanites who struggle to get their voices heard by our political system. Anyone who tells you that our current system does a good job of serving the needs of the poorest members of our society is either extremely naive or deliberately misleading you.

Obviously a lot of people are concerned about unsustainable development. Most voters recognise that density needs to increase in the inner-city, but feel that ordinary residents and planning experts should have more influence and control over this process, and that the developers who profit from new apartment towers must contribute more towards the cost of infrastructure to support the growing population. Currently, many of the big decisions about our city’s future are made by a small group of wealthy elites, which is why there’s such a strong local appetite for structural reform that shifts decision-making power towards residents and away from career politicians, party hacks and the big end of town.

I’ve heard literally hundreds of complaints about traffic congestion and parking problems, which link directly to the very high cost of public transport.

Many residents are also concerned about housing unaffordability and rising rents. Local small businesses are worried that rising commercial rents and competition with larger corporations will force them out of the inner-city.

Most people are just hoping that they’ll be able to pay their bills and get to the end of the week without feeling too exhausted.

Should Brisbane aspire to be “a new world city”, and if so, how do you envisage that taking shape in The Gabba Ward?

I feel like PR marketing has turned the term ‘New world city’ into a parody of itself. Dominant usages of the term seem to evoke the idea of a sleek, corporatised, sanitised, somewhat soulless metropolis without rough edges or random creativity.

I also find the colonial undertones of the words ‘new world’ somewhat problematic. It’s almost like marketing agencies are trying to pretend Brisbane is a blank slate, whitewashing both its recent history and heritage and thousands of years of Aboriginal occupation.

Fundamentally, it’s a question of how we define progress, and whether we can develop a narrative of a modern, cosmopolitan, functional city that’s also sustainable, family-friendly and community-oriented. My idea of progress is that Brisbanites can pay their bills while working fewer hours, leaving more time for friends, relatives and leisure activities.

I love the idea of a bubbling, vibrant, occasionally-chaotic inner-city where people of all demographics can still afford to live, and where people know, trust and care for their neighbours. As well as all the cafes and bars, I hope we can find more space for art, music, social sport and community events that have a purpose beyond pure profit, as well as independent small businesses that offer basic goods and services to residents.

This means shifting our spending priorities. City Councillors and senior council executives are overpaid. If they say there’s not enough money in the budget to install safer pedestrian crossings and bike lanes, we should be cutting their salaries to pay for it.

I’d like to see more money spent on amenities in public spaces and parks around the Gabba Ward, and less centralised regulation of these spaces so that neighbourhood communities can decide for themselves how they’ll be used.

I want a city where you can encounter a busking saxophonist down by the river at midnight and know that it’s not some kind of covert marketing ploy by a property developer.

The Queensland Greens don’t accept donations from any corporations (especially property developers), and we’re pressuring the other parties to follow our lead on this.

A lot of residents I’ve spoken to are disappointed that both the major political parties continue to accept large donations from property developers and other big corporations – they see that this is influencing the decisions of Councillors and politicians, and they’re not happy about it.

Labor is sending mixed messages on this. Individual Labor candidates speak out against developer donations, while continuing to receive support from a party that’s firmly in the pocket of the development industry. A few years ago, NSW Labor banned donations from property developers because they felt it was undermining democracy – the Queensland Labor Party needs to follow suit.

It’s not sufficient that larger donations are eventually disclosed. As long as politicians are receiving donations from profit-driven companies, their independence and impartiality will be compromised.

What will your priorities be for 2016, if elected?

As much as possible, I think my priorities should be determined by the people I represent, so as soon as I’m elected I’ll begin organising regular community assemblies in all seven suburbs of the Gabba Ward. Residents need more opportunities to talk to each other (and their Councillors) about issues affecting their area. City Councillors should play a greater role in helping residents establish local decision-making systems for their neighbourhood.

I’ll also set up an online voting system so that residents can easily give me feedback on the issues they care about, and will hold a community-wide plebiscite on the question of whether we should scrap and rewrite the various neighbourhood plans that govern zoning and building height limits in the Gabba Ward.

Other issues that require urgent action: