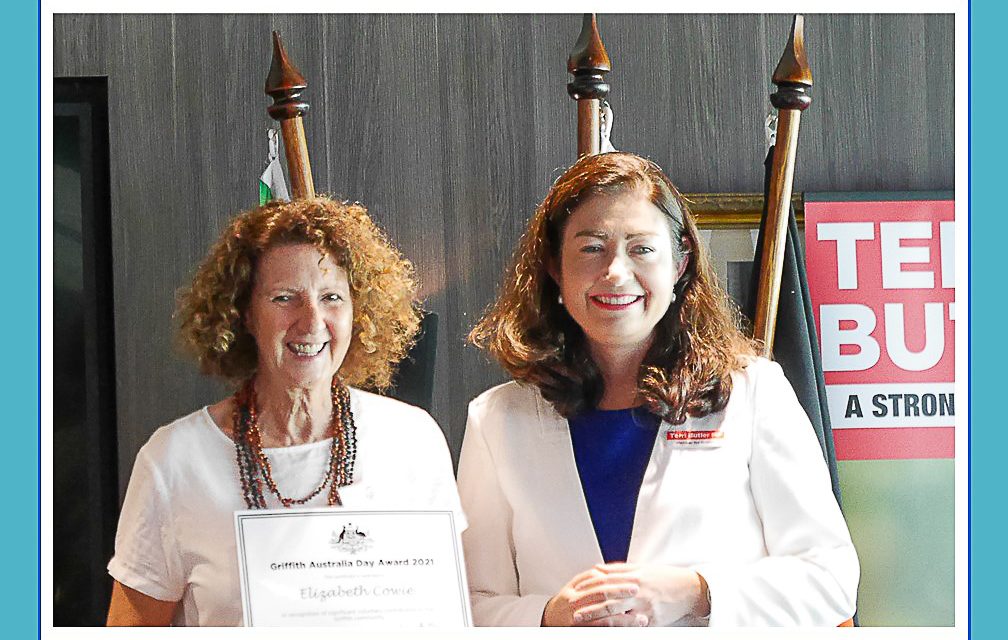 As her daughter Georgia told me, Elizabeth often doesn’t appreciate how much she does for the community nor how much she is valued by those she works with and supports.

That may have changed a little on Saturday 13 March, when Elizabeth was presented with a Griffith Australia Day Award by local member, Terri Butler. She was nominated by her peers.

As set out in her nomination, Elizabeth has nurtured artists and the arts in West End and Brisbane for many years.

She conceived and brought to reality House Conspiracy in Brisbane’s West End.

She is also a valued member of the Kurilpa Futures community group, and an advocate for Indigenous rights, climate change, and the environment.

Elizabeth has managed her voluntary roles at House Conspiracy Art Centre and Kurilpa Futures while working with Doug Hall Foundation, where she is co-founder and administrator, supporting students from rural and remote areas with their education.

She is a mother and grandmother, a friend and mentor to past students, and to many others in her community. 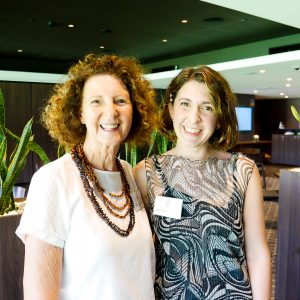 House Conspiracy is an arts and community space for residencies, exhibitions, and private use, located at 42 Mollison Street.

When I interviewed Elizabeth at House Conspiracy last week, she was in the middle of one of those small crises that can impact any home or, in this case, arts space. One of the current artists in residence had had her home broken into, and among the items stolen was the key to her studio.

The idea for House Conspiracy emerged in 2016.

“I am a member of a group called Kurilpa Futures, and we were working on planning and development issues in the area at the time the idea of House Conspiracy was conceived.”

“At that time, there was a lot of opposition to the building development across the road: West Village. We couldn’t help but see what was happening: artists were losing their studio spaces. So, that was when the idea came up because, at the same time, this old house came up for sale.”

“The new buyer, fortunately, had a mind to serve the community, not just tear it down and build high-rise.”

Elizabeth said they realised that local artists needed affordable or free space “to gather to work, play, perform, showcase, exhibit, run workshops, and have meetings”. So, from the middle until the end of 2016, Elizabeth and others began formulating ideas and consulting with the community.

“I, fortunately, had some great young people around me who were keen on the idea. Jonathan O’Brien was the main person involved, along with Remi Rohers, Cinnamon Smith, Lewis Holmes, and Sarah Winter – an amazing group of young minds with creative ideas.”

“Together we all came up with the idea of having a house conspiracy.”

The name ‘conspiracy’ emerged from a group of artists, musicians, and local merrymakers who first conceived the concept of ‘courtyard conspiracy’ in 2013 in the backyard of a share house in Boundary Street.

“It was a place for artists, musicians, and poets to share their music and ideas over a cup of chai. Times changed, and the courtyard was no longer available so, roving conspiracy took its place with events held in various backyards across West End. And then, of course, in March 2016, it roved back into 42 Mollison Street,” Elizabeth said.

There have been challenges. One is that House Conspiracy is in a residential area and complaints about noise have curtailed some of their evening events.

“However, I’m sure the neighbours now realise that any nice music that came out of this house was far better than that,” Elizabeth said, pointing toward the noisy construction site across the road.

Elizabeth says that House Conspiracy was fortunate to have received a grant from Arts Queensland in the beginning, which enabled them to get going. Currently they have a mix of free studio spaces and some artists pay a small rent, and other funds are raised through patrons, and showcase events.

“We’re allowed to have a bar, as long as the profits go back into the house”.

The House has been involved with local festivals such as the Anywhere Festival.

“On one occasion, Vena Cava Theatre group took over the whole house from the front yard to the back and every room in between. That was a very special thing to see; the whole of the old house itself, being the centerpiece of an artwork.”

The House has screened locally produced art-house films. It has nurtured books, screenplays and comedy scripts. One resident artist, Kaitlyn Rogers, went on to win an award for her stand-up comedy and then went on to the Edinburgh Fringe Festival. Bri Lee’s book Eggshell Skull began its life at House Conspiracy and was shortlisted for the 2019 Victorian Premier’s Literary Awards for Non-fiction.

Like so many arts venues in Brisbane, the House suffered in 2020 when the COVID shutdown meant they could not hold any events and showcase artists’ works.

“The owner of the house was really good and halved the rent,” Elizabeth said.

For a while, Elizabeth wondered if the House would survive but says remarkably, “we are now stronger and more vibrant than ever”.

“People seem to appreciate the arts even more. Having a place like this, they can appreciate how important the arts are and what they missed during that period of lockdown.”

Now, every second Friday night, weather permitting, the House shows an outdoor film,  asking only a donation for entry. Once a month, on a Sunday night, a documentary is shown. And every Tuesday night, life drawing classes are held under the House, again with a donation entry, with the money split between the House and the model.

While 2020 was tough for House Conspiracy, it was even tougher for Elizabeth. Throughout the year Elizabeth had two significant personal battles, and it was through her own suffering that Elizabeth says she came to realise how much she is loved by her community.

In July 2020, Elizabeth’s beloved and only grandchild was diagnosed, at just five months, with a Wilms’ Tumour, a kidney cancer, and following surgery, he started six long months of chemotherapy and radiation treatment. As grandmother, Elizabeth’s role was to support Joey’s parents, visiting and nurturing baby Joey, and often providing transport for hospital visits.

“As one of Joey’s primary care-givers, it meant staying away from crowds of people to ensure Joey’s health was at a premium at times,” Elizabeth said.

“The House Conspiracy board was amazing. They understood my need to isolate, and we had some zoom meetings, or they would come and debrief to me personally when I couldn’t go out in the crowds.”

“And it’s rather sweet because we were sitting around this boardroom table, having a board meeting, when I got the call to say, “It’s a boy”. We were all so excited, giving high fives and hugs and squeals of delight. We’ve said Little Joey is a bit like the mascot of House Conspiracy. It was lovely to share that moment with my board, and so the shock five months later when he was diagnosed with cancer was very real.”

“Having that real heartfelt support from the Board kept me focused. They took on extra work when I couldn’t physically be here.”

Elizabeth also experienced her own personal health issue with a detached retina. Her recovery required her to lie still, head-down.

“My community was so supportive helping me out during that time”.

Kurilpa Futures gave her a sense of knowing that she was part of a community.

“I felt so blessed and looked after by so many people. I would find bottles of wine sitting on my front veranda with no name attached, or meals, or gift vouchers in the letterbox for little Joey, saying, “Go buy Joey a book or do something nice for yourself.”

“So, I was quite shocked when I got the call to say that I’d been chosen as a recipient for the Griffith community spirit award, in January, because, to me, I felt like I’d spent all of 2020 draining the community for my own need to survive.”

“I was so lucky to have this community to support me. I didn’t really feel like I was giving much to the community, in 2020. But people pointed out to me that’s when you know you are part of a community.”

And the good news: Joey is officially in remission.

“I’m so happy to say that he’s officially and formally in remission and no more chemotherapy and radiotherapy, no more trips to the Children’s Hospital.”

Asked why she had supported Elizabeth’s nomination for Saturday’s awards, her friend Virginia said:

“You know the statue of Atlas holding up the world: that is my image of Elizabeth.”