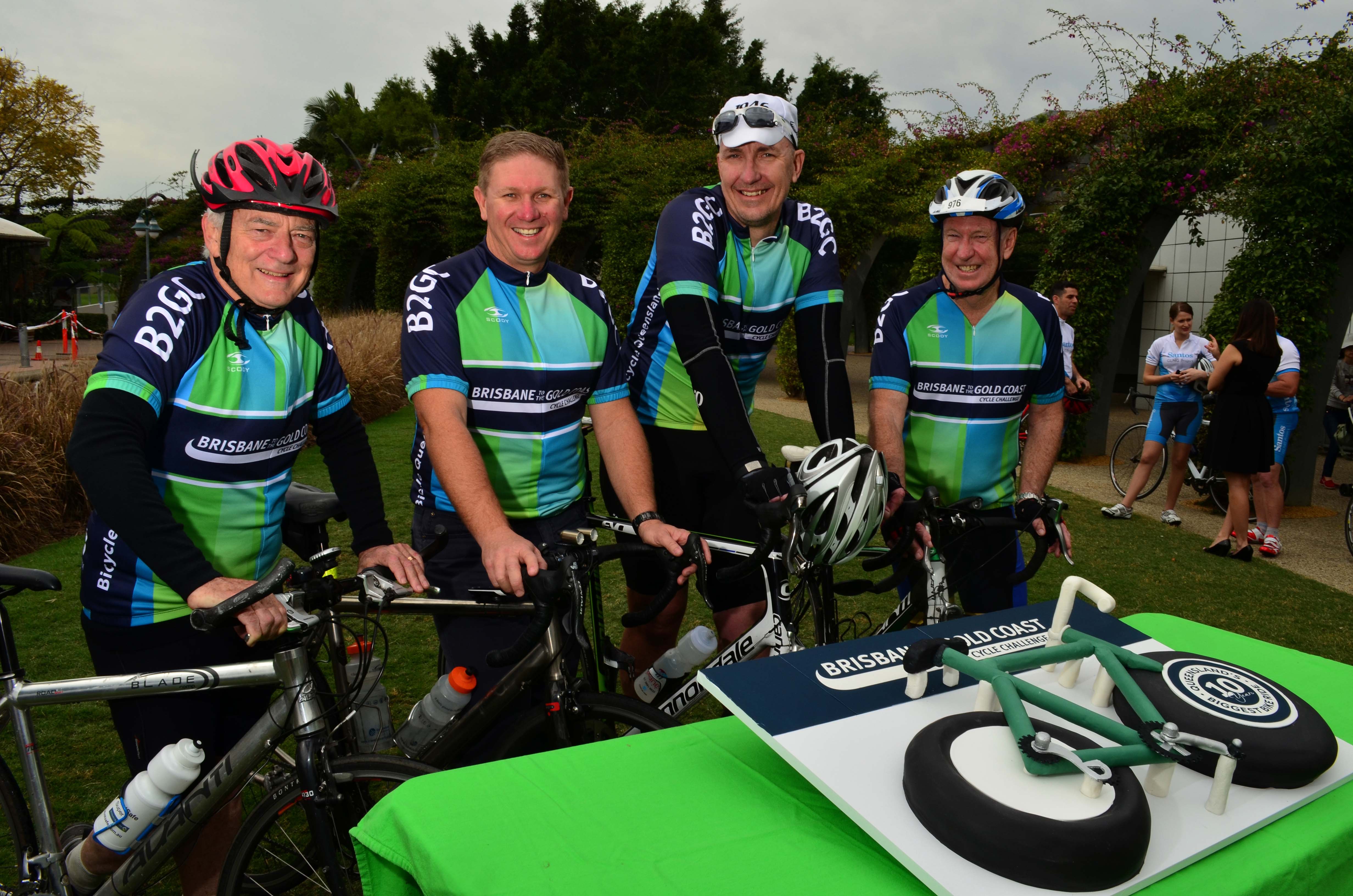 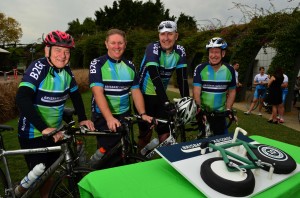 Four original Brisbane to Goldie riders have clocked up 1000k each

They’re known as the 1000k Club, a nickname to honour the achievement of each riding the 100km Santos GLNG Brisbane to the Gold Coast Cycle Challenge ten times.

There was celebration aplenty as four of the challenge’s original participants, Bernard Milford, Shane Osmond, Phil Forshaw and Garry Kuhn accepted the honour of cutting a specially crafted bicycle-shaped birthday cake to mark a decade of Queensland’s biggest and best bike ride.

For Mr Milford, a 64-year-old grandfather of eight, the opportunity to achieve the perfect ten ensured he was one of the first people to enter Bicycle Queensland’s annual ride from Brisbane to the Goldie.

“I took part in the inaugural ride in 2005 and knew there was something special about the Brisbane to Gold Coast Challenge right from the start,” Mr Milford said.

“Your bike can be a lonely place but on that one day the cycling community comes together and the thrill of riding with such a huge group of people has kept me coming back ever since.

“I’ve made lifelong friends as the years and the kilometres of the Challenge have rolled past and I’ve helped raise a bit of money for a number of good causes through it too.”

Bicycle Queensland CEO Ben Wilson said Bernard would be one of an expected 10,000 participants to tackle the 100 kilometre ride which, over the years, has raised almost $1.4 million for various charities.

To celebrate a decade of pedalling to the glitter strip, the entire field will receive a stylish commemorative jersey.

“Over the last ten years the Santos GLNG Brisbane to the Gold Coast Challenge has grown to be Queensland’s biggest and best bike ride,” Ben said.

“No other ride brings together so many like-minded people in a safe and structured environment or offers once-a-year experiences like riding the South East Busway and taking part in a fun, healthy and rewarding activity.”

In 2014 the Santos GLNG Brisbane to the Gold Coast Cycle Challenge is supporting the Heart Foundation and riders are being encouraged to help raise funds for research, prevention strategies and advocating positive, healthy choices to combat Australia’s number one killer.

“Over the years, more than 61,000 cyclists have participated in the ride – including hundreds of Santos GLNG’s very own cycling enthusiasts – and the fact that so many people are keen to take up this challenge is a great indicator of the increasing popularity of bike riding,” Mr Brown said “It’s a great fit for our business, given our strong focus on health, safety and fitness, and I’m pleased that more than 100 Santos GLNG employees have already signed up for this year’s ride.”