Greens hope to make Griffith their trifecta in Queensland 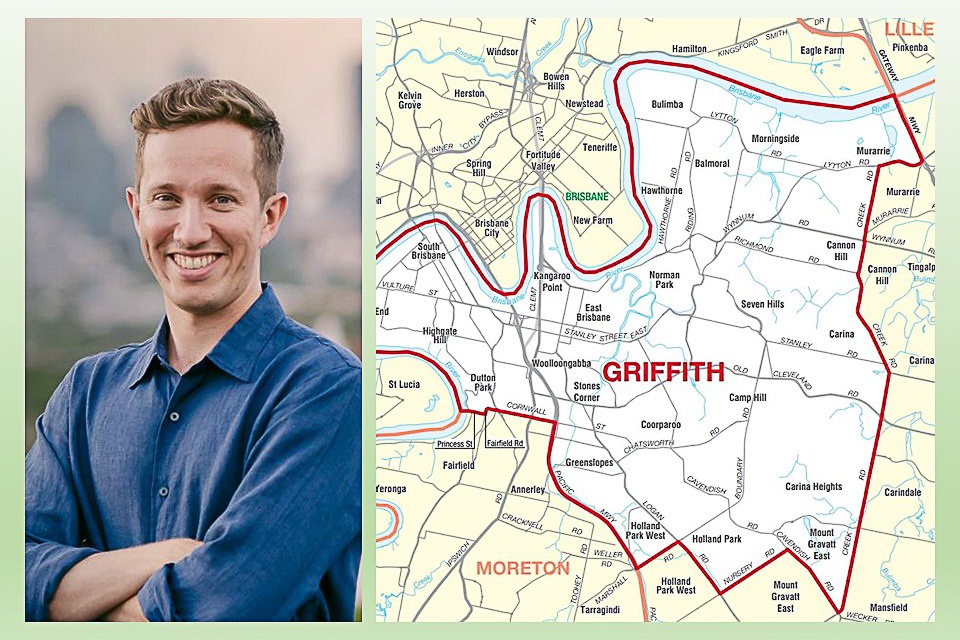 The Greens Party announced yesterday that Max Chandler-Mather would reprise his candidacy for the seat of Griffith in the upcoming federal election.

“I would feel privileged to represent this area,” he said.

The Party calculates that Griffith is the second-most winnable seat for the Greens in Australia after Macnamara in Melbourne. Labor holds both.

“We only need a 3.5% swing off Labor, and after Jonathan Sri and Amy MacMahon’s wins in the same area we think we’ve got a good shot.”

“We aim to win by knocking on every door in the electorate with hundreds of volunteers chatting to tens of thousands of people – it’s how we won The Gabba Ward and South Brisbane and it’s how we’ll win Griffith.”

If The Greens are successful in Griffith, residents in West End will be represented by Greens members across all three levels of government.

The Party banked on gaining the balance of power in Queensland in 2020, when it laid out an ambitious policy agenda crafted by Mr Chandler-Mather. The Greens Amy MacMahon gained South Brisbane against a politically wounded Jackie Trad. However, in the wash-up, Labor was returned with a majority, and some voters now question The Greens’ capacity to deliver for the electorate.

Nevertheless, Mr Chandler-Mather again considers that if the Greens win Griffith, there’s a good chance they will achieve a balance of power.

“In which case we could win things like getting dental into Medicare, public investment in local manufacturing of solar panels and wind turbines, and raising Jobkeeper to $80 a day so everyone can eat and pay the bills.”

Mr Chandler-Mather was The Greens candidate against Terri Butler MP in Griffith in 2019, where he achieved a swing of 6.7%. Ms Butler, who has held the seat since 2014 and is Labor’s Shadow Minister for the Environment and Water, said her focus is on defeating the Morrison Government.

“Australia needs a change of government, and the only way to do that is to vote Labor. I will continue to take up the fight to this horrendous Morrison Government that has been so damaging for our country and our communities in Griffith,” Ms Butler said.

The Greens have nine Senators in Federal Parliament, but only one member in the House of Representatives, Party Leader Adam Bandt.

“Labor’s embrace of the climate-destroying gas industry makes it clear that kicking out the Coalition isn’t enough – we need Greens in both houses of parliament to push Labor to stop backing their coal, oil and gas donors and take action on climate change.”

Queensland Greens Senator Larissa Waters points to New Zealand and the ACT, which both have a form of proportional representation, as examples where The Greens have been able to be part of Governments.

Mr Chandler-Mather has been the Queensland Greens campaign strategist over the past four years, responsible for drafting policy platforms for the past two state election. He worked as a union organiser for the National Tertiary Education Union before joining The Greens.

On his Facebook site, Mr Chandler-Mather wrote yesterday, “Winning Griffith would be a crucial step in building a movement capable of taking on the power of the political and economic establishment and building a future where everyone gets a chance to live a good life. A future where refugees aren’t vilified by a political establishment intent on shifting blame away from the big corporations and billionaires screwing us over.”