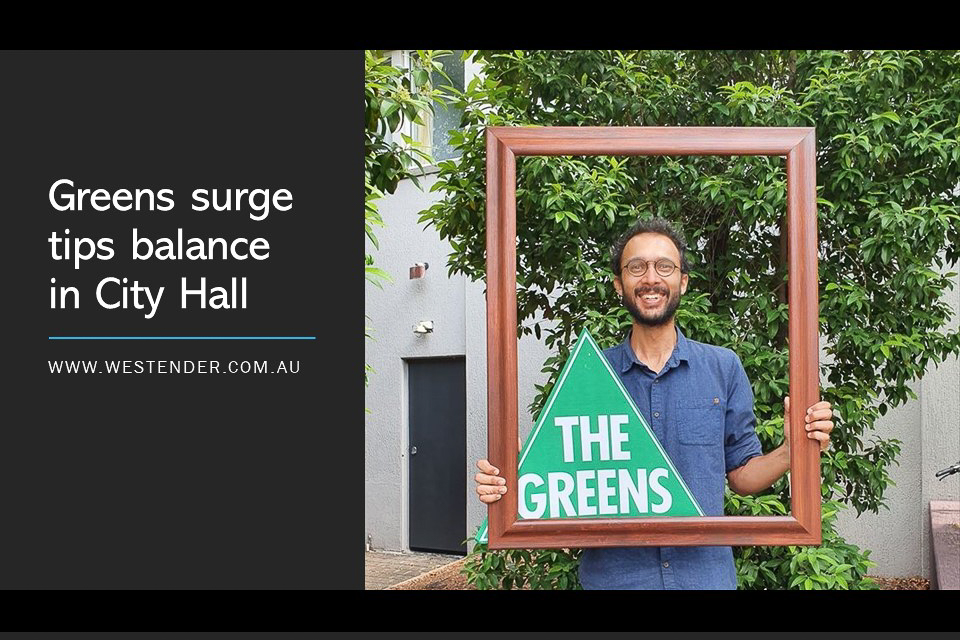 Returning Greens Councillor, Jonathan Sri is predicting that The Greens could hold the balance of power in the new Brisbane City Council elected last night, on Saturday 28 March.

Cr Sri cautioned that there are still a lot of postal votes to count, and that postal votes could hurt The Greens.

Nevertheless, in what he termed, ‘preliminary comments’ based on very early results, Cr Sri told the Westender that as the count continues, it is looking likely that the Greens will pick up multiple seats in Brisbane City Council, and he says, may even end up holding the balance of power.

“Citywide, both the major parties appear to have suffered a decline in their primary vote, while the Greens primary vote increased dramatically, because we actually listened to what residents told us was important to them”.

“We have won the Gabba Ward convincingly, with a whopping primary vote swing towards the Greens of more than 17%. Depending how postal votes flow, our 2-party total could end up at over 65%.”.

Cr Sri said that while there is still a lot of counting to go, it now looks likely that the Greens have won Paddington Ward, while Central, Walter Taylor and Coorparoo all remain strong possibilities.

“The surge in Greens support right across Brisbane has tipped the balance in half a dozen marginal seats, and we’re also a chance to pick up seats in councils like the Sunshine Coast and Scenic Rim, cementing the Greens as a major political force across South-East Queensland,” Cr Sri said.

“This is a ringing endorsement of the bold, transformative vision we’ve advocated of reducing the corrupting influence that property developers and big business exert over local councils, and putting power back in the hands of the people”.

“Despite four years of vicious attacks by the corporate media and the major parties, our strong citywide result and our massive swing in the Gabba Ward shows that residents support the somewhat-unconventional approach I’ve taken as Queensland’s first Greens councillor. A lot of people are hungry for political and social change, and are inspired by our positive vision for a more equitable, more sustainable, more democratic city”.

Cr Sri said that newly elected Greens councillors will, “strive to avoid adversarial us-vs-them partisan politicking, and will focus on bringing people together during this time of crisis, working collaboratively across party lines to achieve practical positive outcomes for the community, while taking up the fight against the big end of town”.

Cr Sri said he will not be giving any further comments until further results are published and confirmed.

Labor candidate for The Gabba, Rachel Gallagher, thanked her campaign team in a Facebook post this morning and congratulated Cr Sir

“Thank you to everyone who voted for me and to all locals that I had the opportunity to speak to on the campaign trail.

“Finally, thank you to Jonathan Sri and Nathaniel Jones . It was a very quick campaign period that was overtaken by a global pandemic, making it at times a very uncertain area to navigate”

“With all the postal votes still coming in, the result hasn’t yet been declared – but I think congratulations to Councillor Sri who is no doubt to be returned as Councillor for The Gabba ward”.