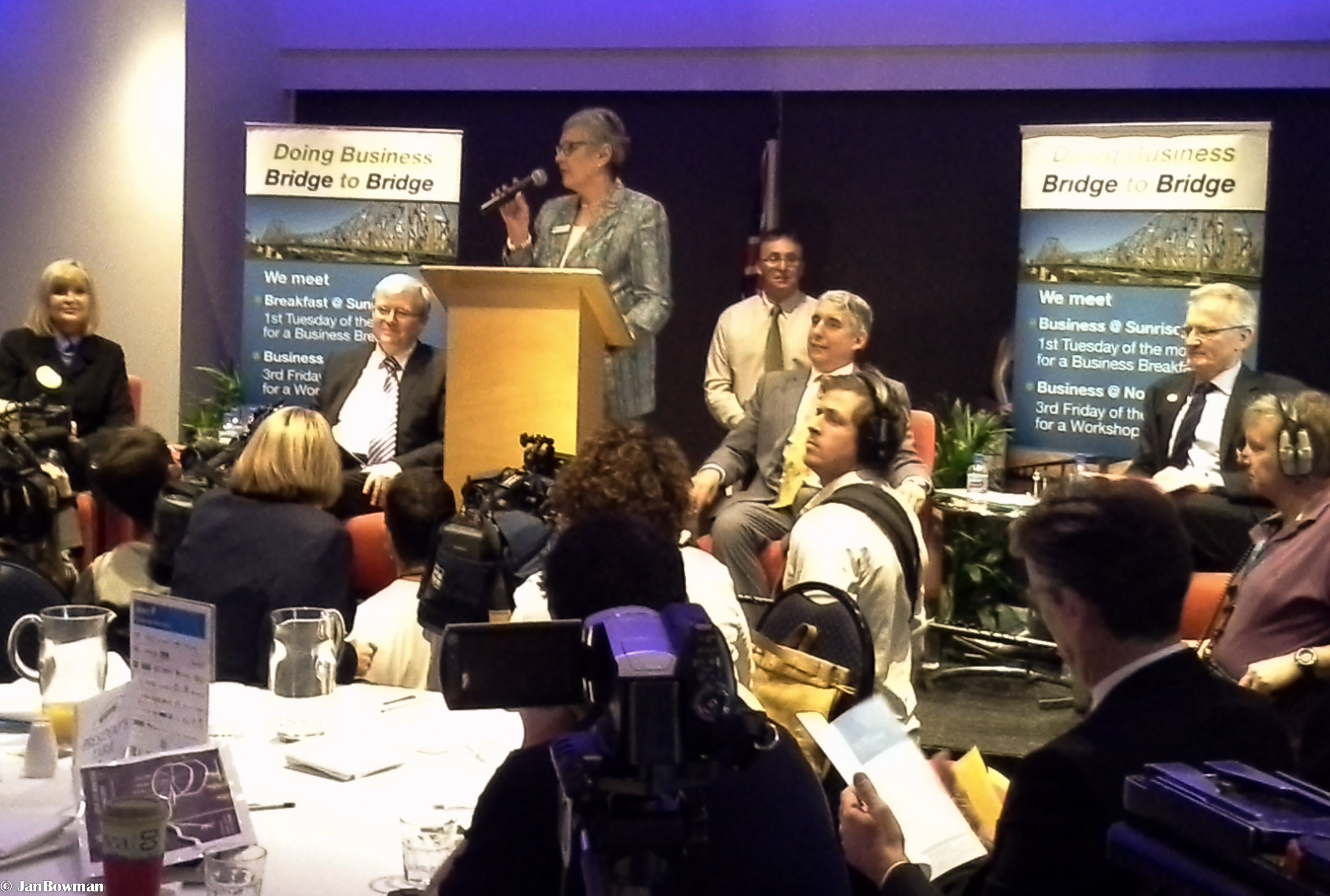 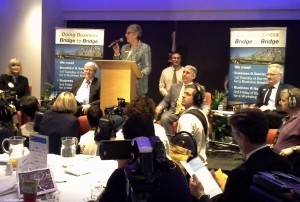 Debate is the “life-blood of democracy”

Republished with the permission of No Fibs

So this is what it feels like to live in the electorate of the sitting Prime Minister of Australia. We are just two days into the election campaign and Kevin Rudd has finally got the debate he has so long wanted – but with his LNP opponent in Griffith Bill Glasson. The media circus is in town.

I arrived early but the television networks were already there. Channel 7 and 10 trucks and generators were set up in the Colsmlie Hotel car park, cameras were hoisted onto shoulders and reporters were coiffured and practicing their pieces to camera. I was amused and slightly embarrassed by my little Olympus camera and flimsy tripod.

At this stage no-one was too interested in the three other candidates Dr Bill Glasson (NLP), Geoff Ebbs (Greens) and Karin Hunter (Palmer United Party) who had already arrived to debate Rudd. The wait was for the PM. Does he stage manage his arrival I wondered, so not to be upstaged? Is it possible to upstage a PM?

I suppose these media guys do a lot of waiting. I asked one cameraman whether he gets advance notice of when the PM is arriving. No, he said resignedly, we just wait.

I stood back at what I thought was a safe distance to observe, but when Mr Rudd did finally arrive I was nearly knocked off my feet in the frenzy for the best vantage point. I did not even get close, and from where I stood Mr Rudd’s face appeared to be an almost a translucent white from the intensity of the press lights. No wonder politicians have to wear make-up. 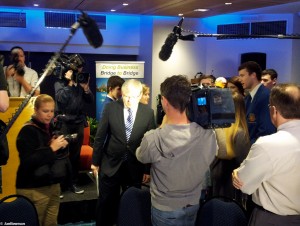 Rudd is taller than I expected, and not quite as chubby as he appears on TV. And in this, my first up close encounter, he certainly does have a statesman-like carriage. Or is that bestowed on him by the cameras and the flurry of attention? For all my cynicism, I was a little in awe.

In their opening remarks all four candidates went about establishing their credentials as either locals, or business people, or both. Both Rudd and Glasson claimed a history in the electorate. Both live locally. Rudd claims to have campaigned door-to-door in most streets of the electorate since first standing (and losing) in 1996. Glasson, Ebbs and Hunter all claimed to be, or have been, operators of small businesses.

The South East Brisbane Chamber of Commerce (SEBCC) is LNP territory however, and it was Glasson who, at the beginning at least, received the loudest and longest applause.

I expected Rudd to be at ease with his audience, and he was. Given his relative inexperience I was surprised at how well Greens candidate Geoff Ebbs was able to hold the audience: he even had them laughing at times. Palmer United Party (PUP) candidate Karin Hunter stuck rigidly to script and for a party that wants to stand out from the mob, there was disappointingly lacklustre and repetitive tone to her responses.

The forum was organised by the local SEBCC and while many of the questions had a predictable business theme and focus, it was the more thoughtful questions of the high school students that most captured my attention and which drew the most considered responses.

When questioned about the high rate of unemployment amongst young people in Queensland, Mr Rudd pointed to Premier Newman’s austerity measures and recent job losses in the state. Dr Glasson and Ms Hunter blamed the federal government for burdening small business with red tape and taxes and Ms Hunter spoke specifically of unfair dismissal laws. They both claimed that being freed from these entanglements will give business an opportunity to create jobs. Ebbs in contrast, reminded the audience that taxes are not a bad thing, they pay he said for the education needed to build the workforce and he suggested that Australia look to high taxing countries in Northern Europe for a renewed focus on innovation. 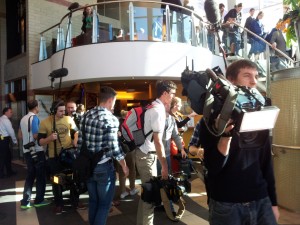 In a follow-up question to the Greens on how to bring employment to Queensland, Ebbs supported the need for the full rollout of the NBN, and on the need to focus on changing the landscape of energy production to focus on renewable sources. Mr Rudd too focussed on the NBN as a ‘pro-business, pro-growth’, ‘liberating technology’ which will ‘overcome the tyranny of distance’ for many Queenslanders. Again Dr Glasson and Ms Hunter were pretty much in lock-step; with both supporting the concept of the NBN, but both claiming it is just not affordable in its current form.

Some questions felt like they’d been planted. Had they? A question about policy on preventable health care gave the PM the opportunity to raise the question of smoking, and this ended with the inevitable taunt to Dr Glasson, as a former President of the AMA, about the continued acceptance by the Liberal party of donations from the Tobacco industry. Dr Glasson in response said his mother had died of a smoking related illness, and that he is personally passionately anti-smoking. It was not until after the forum when being interviewed on ABC radio that he said (if elected) he would take up the issue of tobacco company donations in the party room. Ebbs reminded the audience that both parties accept donations from gambling firms and so neither can claim to be pure in these matters.

Questions on Gonski and asylum seekers were answered predictably enough, although Karin Hunter seemed to get into a tangle on asylum seekers, and it was hard to know exactly what the PUP is proposing. 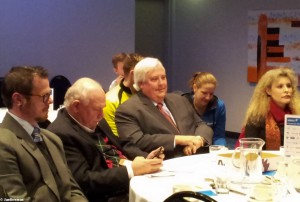 Perhaps the best question of the day to all the candidates was ‘How do you separate your moral beliefs from what is expected of you by your party?’ Kevin Rudd said whether religious or not, we are all shaped by a set of beliefs. The question for him when entering politics was how the political parties measured up against his personal beliefs. ‘I believe passionately in a fair go for everyone’. ‘I made a judgement that for me, through a lot of reflection, [that the ALP] is the best approximation, of the things I believe in most passionately’. But he admitted that from time to time there is a struggle, and the policy stance he feels he has had to take on asylum seekers provides such an example.

Dr Glasson made reference to the importance of marriage and the family in his life. But he said, at the end of the day politicians should also represent the views of the people they stand for, ‘that’s what you’re there for’. For him, he says it will be important, ‘when sitting in my rocking chair at the end of my career, to be able to say, ‘Yes, I made the right decision; I made it for the right reason.’’

Geoff Ebbs said that the responses by Mr Rudd and Dr Glasson illustrate that nearly everyone goes into public service, ‘because they are driven by something in their heart and they want to make a contribution to the community’. Political parties according to Ebbs play a much more significant role in Australia than the constitution was designed for. We now have a ‘sort of team approach to politics’ where everyone has to follow the party line. Ebbs said the Greens have a few basic principles that guide them but often grapple with moral judgements on the detail and priorities. But politics he said is about listening and practical common sense, not ideology.

Similarly Ms Hunter said being a politician is not about you, ‘but about the people you represent’. The PUP she said will give a conscience vote to all its members on social and moral issues such as same sex marriage and abortion. Being a politician she said has nothing to do with power, ‘it is about serving the people’.

In summary, Ms Hunter challenged both Mr Rudd and Mr Abbott to debate Clive Palmer (though she doubts they would have the courage to do so). She contrasted Mr Palmer (who was in the room at this stage) as a man who had built himself from nothing to become a multi-billionaire, with Mr Rudd and Mr Abbott who are professional politicians, who do not deal with their own money and who therefore don’t understand small business.

Mr Ebbs said politics takes effort; it is not something you can just step into from the business world. The Greens he said began twenty years ago as a group protesting environmental destruction, but it has developed and broadened its base, much as the Labor party was started 100 years ago by a bunch of shearers. The future he said is Green. In a world of resource shortages, ‘we have to nurture our natural resources’ and ‘have the moral fortitude and courage to control and manage our greed’. He considers the Greens will continue to grow and may be in a position to hold government in a decade or so to come.

Dr Glasson’s concluded that he is not a very political person. He said of his late father who was a National party member for 18 years, that his greatest honour was when he won the town of Barcaldine (the home of the Labor Party); not because he was a strong National, but “because he was there to represent the people”.

“I have a passion to represent the people of Griffith. I have lived in Griffith almost all my life. Griffith is my turf’.”

Dr Glasson appealed to Mr Rudd to support Hummingbird House “if I don’t get elected” as the first children’s hospice in Queensland. Mr Rudd: “We are happy to support the project, and we will do so.”

He concluded however on a more adversarial note. Debate was the “life-blood of democracy”, so “if the Liberal candidate for Griffith can front up with me, and I welcome it, why can’t the bloke who wants to be prime minister?”