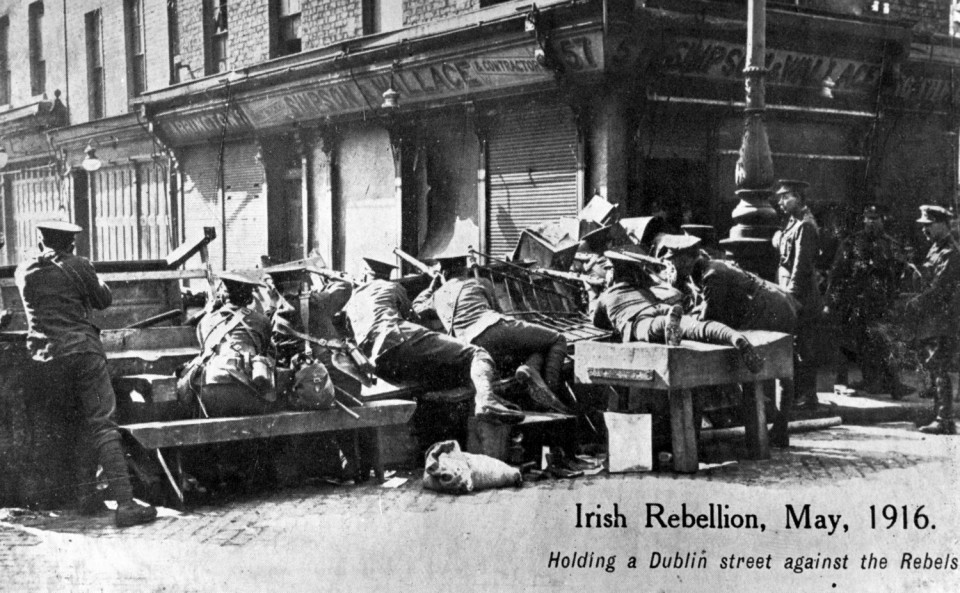 ST 6129-02 British Troops. Obligatory Credit – CAMERA PRESS/IWM. Archive image of a group of British holding a Dublin street against the rebels in the Easter uprising of 1916, when a force of Irishmen under arms estimated at between 1,000 and 1,500 men and women attempted to seize Dublin, with the ultimate intention of destroying British rule in Ireland and creating an entirely independent Irish Republic. 1916

Irish theatre returns to the Brisbane stage after too long an absence with Foundry Theatre’s production of The Shadow of a Gunman, Sean O’Casey’s seminal work set during the Irish War of Independence.

First produced at the Abbey Theatre in 1923, only two years after the end of the war, this classic play examines the lives of a group of poor Dubliners searching for meaning and excitement against the backdrop of the violent struggle between Republican and English forces in 1920.

Alternately funny, poignant and incisive, O’Casey’s most famous work explores themes of religion, philosophy, mythology, and identity, through the lives of would-be poet, Donal Davoren, his roommate, Seumas Shields the pedlar, and the other colourful denizens of the cramped tenement in which they live.

“It is a beautifully rich and exciting text and we are really honoured to be able to bring such an important piece of theatre to Brisbane audiences,” says the play’s director, Dan Lane.

“O’Casey created some wonderful, vibrant characters, and uses them to comment on the poverty and desperation experienced by the tenement dwelling poor, among other social issues of the day, many of which are still relevant to a modern audience.”

The 1916 Easter Rising was a pivotal event leading up to the War of Independence and Foundry Theatre is proud to be involved with the Irish Australian Support Association in commemorating the centenary in 2016.

“We chose The Shadow of a Gunman not only because of its status as an iconic piece of Irish theatre but also because of its relevance to the centenary of the Easter Rising and the Republican movement,” says Lane.

“There is a rich tradition of the Irish in this country who have contributed to the development of the Australian nation, so it’s fantastic to celebrate that and the independence of the Irish nation with such a brilliant Irish play.”