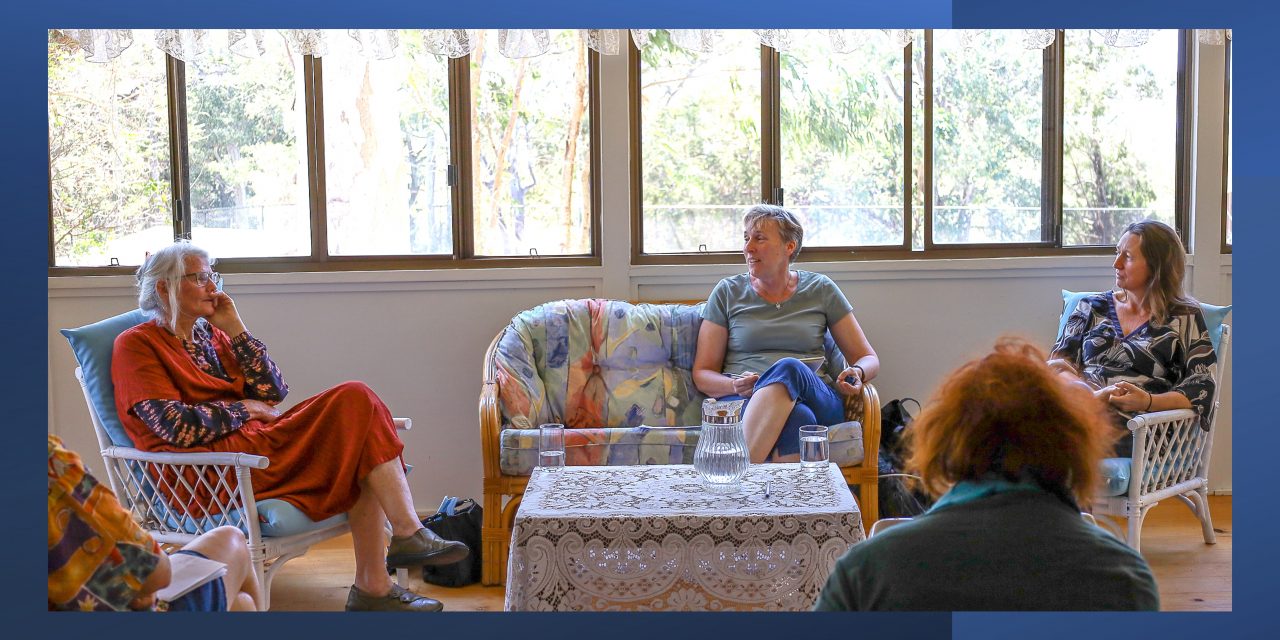 Cli-Fi or ‘climate fiction’ could sound a little misleading. It could in fact be referred to as ‘climate truth’, because its writers are attempting to convey the reality of climate change through the novel or fiction form.

On Sunday, 3 October, I boarded a ferry for tiny Ngudjuru – Lamb Island in Moreton Bay to find out more.

The island is home to just four hundred residents, among them Deborah Jordan and Susan Ward. Inspired by Writer’s Week at the Adelaide Festival, held annually in Adelaide’s Pioneer Women’s Garden, the two decided that the Lamb Island Pioneer Hall, being similarly shady and charming, would make an excellent hub for their literary festival. Thus the Island Storytellers, Writers & Readers Festival was born.

The Festival program was extensive, running from 1 to 4 October, and covering sessions on women’s writing, comedy, lyrics, and poetry; there was even an island history session and sail around the island. I attended just one session, one I was very keen to participate in, titled Forces of Nature: Writing about the Environment.

The day was idyllic, with the sun shining and the peaceful island ringing with bird song; hard to imagine as we assembled in the local Pioneer Hall that anything could be wrong with the world; the subject matter, though, was challenging.

The panel comprising Robyn Gulliver, Andrea Baldwin, and Deborah Jordan led us in conversation about writing on climate change, fiction, and non-fiction.

Dr Jordan describes herself as a historian, skipper, and scholar. Among her many achievements is Climate Change Narratives in Australian Fiction prepared for AustLit, a survey of Australian fiction that addresses climate change.

All fiction can help us imagine new and different worlds, and that is its power. In her introduction to the AusLit project, Dr Jordan says, stories are told and retold to make sense of the world and to create meaning.

“Fictional worlds can be seen in context of narratives and discourses, which frame issues. That is how we understand social and cultural change and the values that we attach to these crises.”

“Is there a view among climate scientists that because the forecast effects of climate change are so obliterating, historical understandings of humans are irrelevant? Such a view undervalues the capacity of human consciousness to adapt to new pathways of cognition and adopt new layers of meaning…”

Not long before I took my trip to Lamb Island, I had spoken with Jonica Newby about her book, Beyond Climate Grief: A journey of love, snow, fire, and an enchanted beer can. While not fiction, Dr Newby speaks about the hero narrative and the fiction of Tolkien. Fiction, she says, allows us to imagine a frightening and still unknown future.

I asked Dr Jordan how she thinks fiction allows us to think differently about a confronting future, and why that is important.

“As a society, and as individuals, we are shaped by the stories we tell ourselves. Despite limited knowledge of the carbon cycle, most of us now understand that so much carbon has been released into the atmosphere that climate shift is happening now, and climate change is largely inevitable. Cli-Fi explores different scenarios for the future, good and bad, fires and cyclones, carbon scrubbers and corporate takeovers, and allows us to think about different options.”

“Some environmentalists have turned to fiction to reach a broader audience. Usually, this is genre fiction, and climate fiction comes in all genres, adventure, drama, murder, romance, mystery, science fiction etc. Climate fiction takes many forms and does not need to include a detailed understanding of our habitat or environment, that is, by writers who focus on climate change as a human problem.

In her address, Dr Jordan focused on books that she said everybody should know about: Carpentaria and The Swan Book by award winning First Nations writer Alexis Wright and Richard Flanagan’s The Living Sea of Waking Dreams. I asked why these books are so important (especially for Australians) in the context of the climate emergency.

“With its long history of colonialism and mineral extraction, Australia more than most counties, needs writers to re-frame the great divides, often along party political lines, to tell us new stories to celebrate our ways into the future.”

“While there has been a very long tradition in Australian writing about settlers adapting to the unique Australian environment, and some successful Cli-Fi books were published at the time of the ozone crisis in the 1970s, only recently has climate fiction entered the mainstream.”

Panellist Andrea Baldwin, who has doctorates in both Psychology and Creative Writing, is currently writing a young adult climate fiction trilogy which she describes as a post-apocalyptic climate change narrative. It is about young people living in a “post climate disaster world”. The question for them is how they can work together to save what remains.

Dr Baldwin said that she had several knock-backs for her manuscript from publishers.

“Everybody says, ‘it’s beautifully written, the characters and story are great, but we have no idea how to sell it’.”

Dr Jordan told me publishers are extraordinarily powerful gatekeepers of what gets published and read.

“Independent Australian publishing, with its powerful strands of eco-writing, faltered in the mid-1990s… and libraries no longer have separate sections of Australian writing. We must supposedly compete on the world scene, and so editors and writers delete the specifics of Australian flora and fauna for an American audience.”

“Professional writers, who earn their living by writing, cannot live by rejection of their manuscripts and, of course, have all kinds of ways of responding, re-formulating, re-framing, introducing different characters and so on.

There is the risk that using art or fiction to send a message can overwhelm good art or story-telling .

Dr Jordan said it some attempts at Cl-Fi have been clunky, but it takes all kinds of writers and readers, and all kinds of stories, to develop a context for great stories to emerge.

“We have our senior, best storytellers now publishing openly about climate change.”

“If we frame fiction and non-fiction about climate change as a human rather than environmental problem, we open up the field to a wider range of voices.”

What’s Next? An Anthology of Climate Change Short Stories

Dr Jordan said that she and Susan Ward are now discussing launching a prize for a short story about climate fiction and putting an anthology together to launch at the next Lamb Island Writers and Readers Festival.

“Watch this space, if we go ahead and finalise sponsorship.”

Read more about the Festival  here

All Hands on Deck for the first Island Storytellers, Writers, and Readers Festival