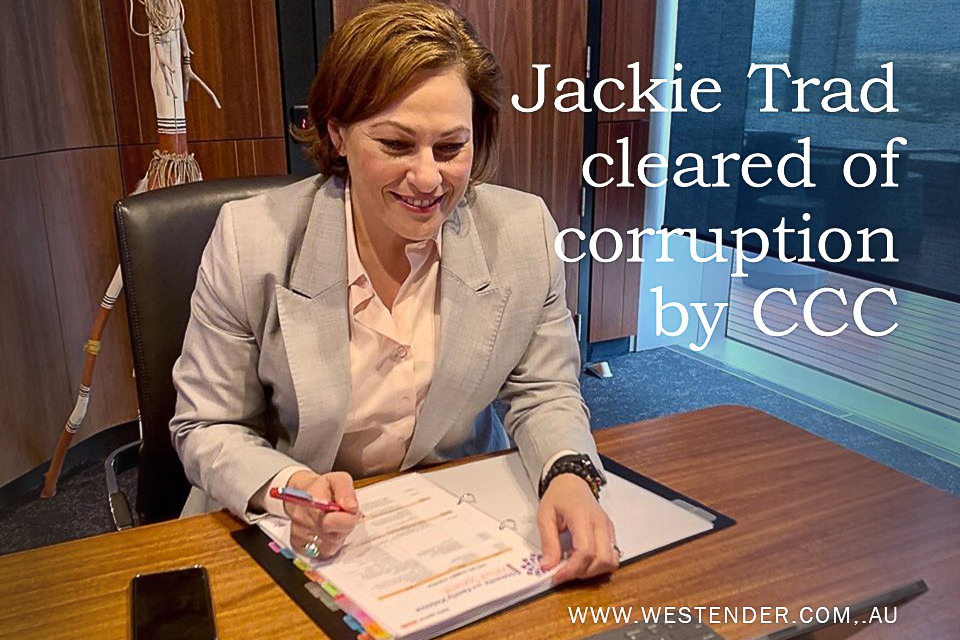 Member for South Brisbane, the Hon Jackie Trad MP, said in a statement today, “What I have said all along has been found to be true and accurate.”

The CCC commenced its investigation on 19 December 2019 into allegations that Ms Trad had interfered in a Department of Education (DoE) recruitment process to select a principal for the new Secondary College the Queensland Government is building in Dutton Park.

During the six-month investigation, the CCC says it interviewed a number of people, examined witnesses at coercive hearings, and obtained documentation and electronic records to determine if any person had committed corrupt conduct as defined in the Crime and Corruption Act 2001.

The CCC found that there is no prima facie case that Ms Trad had committed a criminal offence or that she was motivated by any dishonest or corrupt intent.

Ms Trad stood aside on 10 May after being formally advised that she was under investigation by the CCC.

In an interview with the Westender in late May, Ms Trad said the decision to step down from the Ministry was entirely her own.

“I think it’s important to place on the record that my decision to stand down was my decision.”

Ms Trad said today that there has been an ongoing smear campaign against her, “… that has had a detrimental impact on myself, my family and sadly, on the South Brisbane community.”

“Unfortunately, this matter was turned into a political witch-hunt by the LNP.”

“More importantly, this mud-slinging was happening at a time when I was focussed on keeping Queenslanders in jobs, and delivering a plan for economic recovery for our state as the Treasurer.”

Ms Trad says she makes no apology for caring about the future of her local high schools.

“I will never apologise for being a strong voice and a leader for our community. of South Brisbane. That’s all I have ever done, and what I will continue to do.

Following her resignation, initially assumed to be for the duration of the investigation only, Premier Annastacia Palaszczuk appointed replacement Ministers in Ms Trad’s portfolios, announcing that the appointments would be permanent.

In a report in the Courier Mail published on 23 June, the Premier said Ms Trad would not be returned to Cabinet during the current term, even if the CCC cleared her of any wrongdoing, but the Premier refused to be drawn on whether Ms Trad will return to Cabinet if Labor wins the October 2020 election.

Ms Trad has confirmed that she will be Labor’s candidate for South Brisbane at the upcoming election.

“I am committed to my community of South Brisbane and want to ensure they have strong, effective and progressive representation following the next state election,” Ms Trad said.

The report An investigation into allegations relating to the appointment of a school principal is available on the CCC’s website.