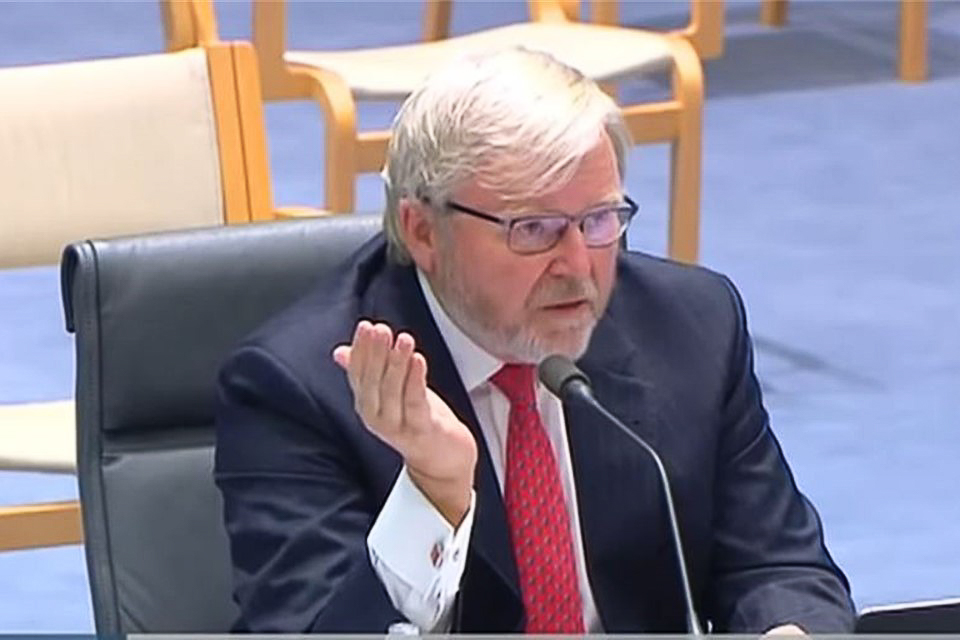 In the heady days when West End could boast the Prime Minister of Australia, the Premier of Queensland and the Lord Mayor of Brisbane as our local political representatives all at the same time, Kevin Rudd was a regular contributor to the Westender.

Kevin Rudd has been in the news again quite a bit lately as he mounts a vigorous campaign against the Murdoch media monopoly in Australia and calls for a Royal Commission into News Corps.

In yet another Westender exclusive, Kevin has graciously agreed to answer a series of written questions compiled by the Westender’s editorial team.

You said at the Senate committee inquiry that you were “fearful” of News Corp while prime minister. Can you expand on why?

Every political leader knows that falling foul of Murdoch’s monopoly puts you in the firing line. This culture of fear pervades the deliberations of our leaders, state and federal, and embeds Murdoch’s political compass in our debate.

Half-a-million Australians expressed exactly this view by signing a petition for a Royal Commission. And thousands more continue to pledge support at MurdochRC.com.

The question for leaders is how they deal with that. I made the calculation, knowing there were risks, that my government would not give Murdoch special treatment. This upset the status quo under John Howard, who put the Murdoch media on a steady drip of exclusive stories to give them a commercial edge over their rivals. In return, Howard received favourable coverage.

On the other hand, we made policy decisions that enraged Murdoch, including record funding boosts to the ABC and a full-fibre National Broadband Network that threatened Murdoch’s Foxtel cable monopoly.

Has the Government’s pursuit of big media deals with Google and Facebook been good for Australian media’s diversity and quality journalism as they claim?

In my judgment, this code is likely to make Australia’s media diversity problem worse.

Let’s be clear about what Murdoch has done. He’s used his power over the Morrison government to shake down Google and Facebook, getting them to hand over untold sums of cash in order to avoid regulation. It’s been a huge windfall gain for Murdoch – and despite Murdoch using the power of the parliament to achieve that result, we don’t even know how much money he’s made from it.

I think the real proof will be how much money outlets like the Westender can get out of Google and Facebook. I hope Morrison will go to the rail for you, like they did for Murdoch.

Jackie Trad and Kevin Rudd at the 10th anniversary of the Apology to the Stolen Generations at Cranbrook Place in West End in 2018.

You suggested in a tweet on 11 May, 2020 that then Member for South Brisbane, Jackie Trad, was singled out for negative treatment while other MPs, such as Angus Taylor, have been protected by News Corp. Wasn’t the Courier Mail just doing its job?

Nobody disputes the role of the media in holding the powerful to account. That’s exactly what it’s supposed to do.

But it’s a problem when the Courier-Mail maliciously publishes overblown, misleading or outright false claims about their perceived villains, while practically ignoring serious allegations and even findings against their perceived friends.

That’s not journalism. It’s a protection racket. Their true motive is simple: discredit Labor governments at all costs.

In this case, the Courier-Mail tried to bring down the Palaszczuk Government. But all they succeeded in doing is undermining one of the strongest, most progressive voices in our parliament and our state is poorer for it.

Ask yourself this question: why did Rupert Murdoch, Clive Palmer and Peter Dutton all want Jackie Trad out of parliament? Because they’d rather have an ineffective Green party MP making speeches from the crossbench than an effective, progressive voice like Jackie Trad at the heart of the state government.

We cannot pretend the Courier Mail, in their campaigns against Palaszczuk and her Cabinet, was engaging in some exercise of especially investigative journalism.

For example, Jackie was cleared by the CCC. But if you picked up the Courier-Mail the next day, you’d think the exact opposite was true.

By contrast, the LNP’s lies and bungles continue to go under-reported, especially in their biased coverage of Morrison’s COVID response.

Despite the Courier Mail’s concerted attacks on Labor, Queensland Labor has won the last three state elections. Do we overestimate the influence of News Corp?

This is completely misguided.

Labor’s success at the state level in Queensland is a sign of our party’s strong values, strong leadership and superior policies – not a signal of Murdoch’s weakness. Labor has to fight for every inch they gain in state politics, because the dice are loaded against them. It’s an uphill battle every single day.

The broader issue is the Liberal National Party, which is just a wreck at the state level. Every election they present dud policies and dud candidates which stem from their dud culture and dud values. In other states, Liberals have imported a brash neoliberal “me first” culture, but that doesn’t play at all well in Queensland when you’re talking about the tier of government that delivers public goods like healthcare, schools and TAFE.

Queenslanders know there’s nothing the LNP enjoys more than cutting public services to the bone. And when the LNP had their chance under Newman, that’s exactly what they did.

News Corp continually underestimate Annastacia Palaszczuk, and underestimate the LNP’s ability to embarrass itself. Never do that.

What sort of future do you foresee for hyper-local news outlets like the Westender and for the many locally published regional titles that have sprung up in the wake of News Corps’ and HWT’s closure of so many country papers?

I’m seeing a lot of fightback from smaller hyper-local news outlets like the Westender.

One of the problems with monopolies is that it makes the dominant power lazy, complacent and less willing to innovate. By contrast, smaller outlets are showing a lot of innovation.

What do we do about that? The fact is the media industry is extremely complicated, it has a lot of moving parts and it’s being transformed by technology. If introducing media diversity wasn’t complicated, we would have cracked this nut already.

My solution is to give a Royal Commissioner the time and resources to take public evidence, expose all the fault lines in the system and present the government with a suite of options to actually enhance media diversity.

More than half-a-million Australians agreed with me and signed our petition for a Murdoch Royal Commission last year. Still more are registering as supporters of this campaign at the MurdochRC.com website.