The Largest Star In The Universe 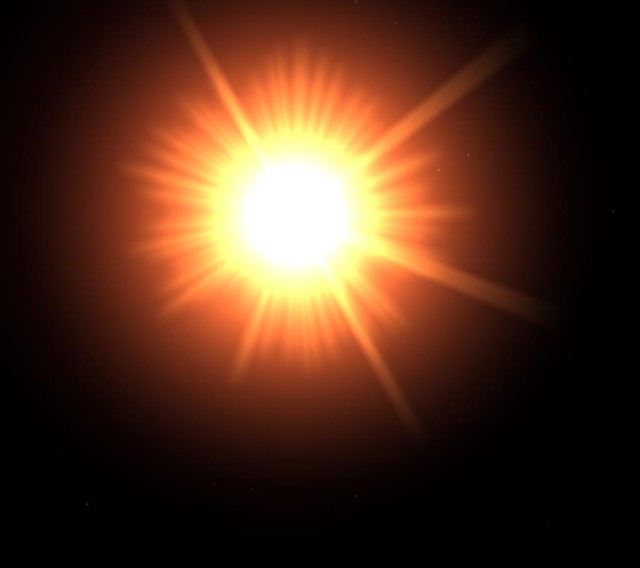 A red Hypergiant, one of the largest stars believed to exist in the Universe. Image credit: NASA

Astronomers have spotted what they believe is the largest known star in the Universe. It’s a red ‘Hypergiant’ located about 5,000 light years from Earth in the constellation Cygnus the swan. Astronomers recently calculated its upper size at more than 2,000 times the size of the Sun. That is around 1.2 billion kilometres wide!

Placed in our Solar System, its surface would extend out to the orbit of Saturn. Light takes more than 4 hours just to cross its circumference!

That’s the biggest star that we know of, but what’s the biggest probable star in the Universe? Obviously, it’s difficult for us to actually find it, the Universe is a big place, but some astronomers believe one day we’ll find a cool ‘Supergiant’ 2,600 times the size of the Sun. That, astronomers believe, is the largest possible star. Now that’s big!

Talking about the Universe, it’s time to scan the skies again. Stars come up nicely through a telescope and as you know I always use binoculars because you see a wider field of view. The image is right side up and the larger field of view makes it easy to find what you point at. They’re so simple to use, the ideal starter instrument to go star spotting with.

The Lord Of The Rings

Saturn is nearby and shines in the western sky at nightfall and stays out until late evening in late August. Saturn is the planet with the WOW factor. There is no more dazzling sight in the solar system than that of the ringed planet, even city lights can’t diminish the beauty of this tiny but picturesque crowd pleaser!

Stories abound about first timers who catch their first glimpse of Saturn through a telescope, only to check the front of the scope in disbelief to see if there isn’t a picture of the ringed planet dangling there.

How could an object so far away in space appear so perfectly clear and sharp? Such is the utter coolness of Saturn. Every time I show people Saturn through a telescope they turn and say, “Wow, it really is there!” Such is the magic of the ‘Lord of the Rings.’ At the moment Saturn and Mars are close together in the constellation Libra low in the western evening sky.

Hey, have a guess how much space junk is floating around up there? That’s right, too much to count and we put it all there, over the past 40 years by launching more than 10,000 satellites, the majority of which are still in orbit. We’re only now beginning to reap the bounty we’ve sown, so to speak.

Rocket booster casings, dead satellites – you name it and it’s there posing a problem for astronauts and space tourists for the next 30 years. Scientists believe there are more than 300,000 pieces of debris in space, made up of everything from tiny screws and bolts to large parts of rockets, mostly moving in low orbits around Earth at tremendous speed.

Are you starting to get reminders of what you saw depicted in the 2013 Hollywood movie Gravity and wondering…what if? Stunning movie though!

David Reneke is one of Australia’s most well known and respected astronomers and lecturers with links to some of the world’s leading astronomical institutions. David is the editor for Australia’s Astro-Space News Magazine and a writer/publicist for Australasian Science magazine. www.davidreneke.com