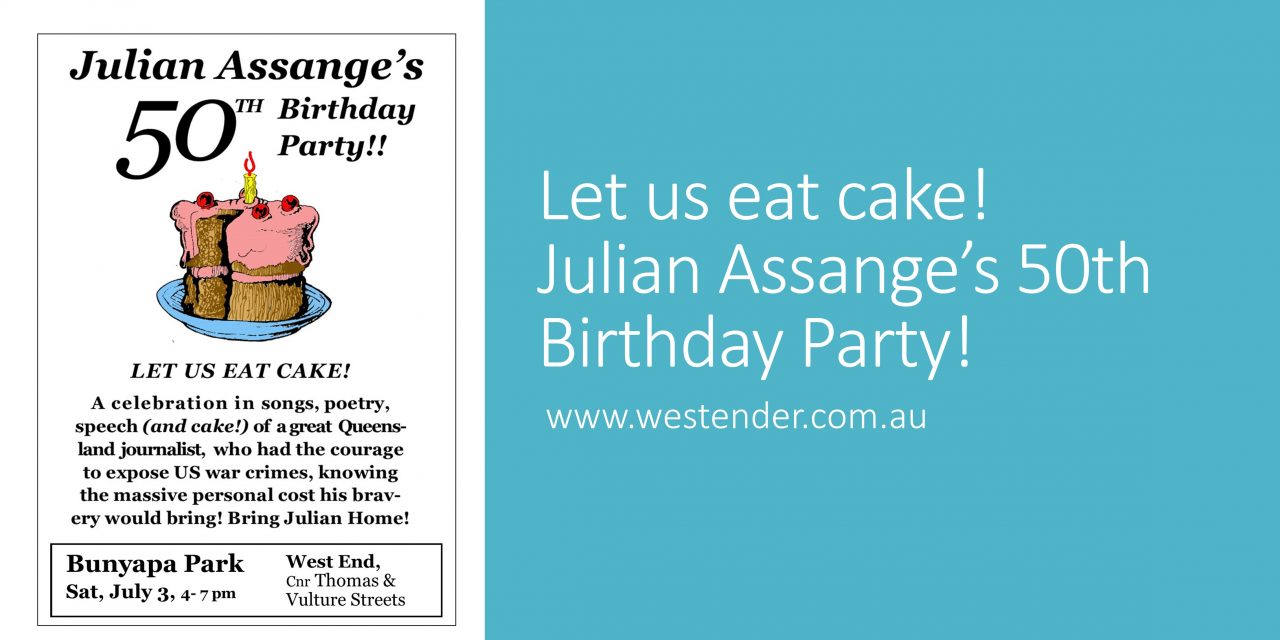 July the third will be the fiftieth birthday of the great Queensland-born journalist, formerly known as Julian Assange, now known to his jailers in Her Majesty’s Prison Belmarsh as prisoner number A9379AY. Belmarsh is nick-named Hellmarsh; it is Britain’s Guantanamo Bay, the prison for murderers, terrorists and honest Australian journalists. The circumstances of prisoner number A9379AY are not good. He is locked down 23 hours per day in a jail where Covid-19 is raging, but things could get a lot worse.

The US want to extradite Assange for the crime of revealing their war crimes in Iraq and Afghanistan. These self-declared defenders of a free press intend, with characteristic breath-taking hypocrisy, to reward Assange for his honest journalism by giving him a new prisoner number and locking him up for 175 years in a US super-maximum prison as their special message to the journalists of the world.

Along with members of the Brisbane Assange Network, I am helping to organise a  50th birthday celebration for Assange in song, poetry, speech, (and cake!) in Bunyapa Park called Let Us Eat Cake! If you can help with song, poetry, speech or cake, we welcome your contribution!

I want to do this because I want people to hear the truth about our truth-teller. In my view, Julian Assange was the most original and powerful voice in twenty-first-century journalism, the epitome of the muckraking tradition that dares to speak truth to power, as opposed to the mainstream media who exist to be the stenographers and the boosters of power.

Assange changed journalism with WikiLeaks. The anonymous, secure digital dropbox that Assange pioneered through WikiLeaks has been widely copied by many major corporations like the New York Times, the ABC, etc., allowing whistle-blowers to transfer information to the public and preserve their anonymity, avoiding the remorseless persecution that is all too often their fate.  With the massive Cablegate files, Assange and WikiLeaks also pioneered analysing large data sets in a collaborative way on a never-before-seen scale with a global coalition of 89 news organisations that included, The New York Times, The Guardian, Le Monde, La Republica.

The Walkley Award for ‘outstanding contribution to journalism’ given to Wikileaks in 2011 by a panel comprised of several of Australia’s most distinguished journalists, noted:

“This year’s winner has shown a courageous and controversial commitment to the finest traditions of journalism: justice through transparency. WikiLeaks applied new technology to penetrate the inner workings of government to reveal an avalanche of inconvenient truths in a global publishing coup. Its revelations on how the war on terror was being waged, to diplomatic bastardry, high-level horse-trading and the interference in the domestic affairs of nations, have had an undeniable impact.”

Besides the Walkley, WikiLeaks and Assange have won over a dozen of the most important global journalism awards, bestowed by panels of the most prominent journalists worldwide, all of whom have made similar, glowing endorsements.

Yet the Big Lie promulgated by the US that Julian Assange is not a journalist persists in the Australian media, especially in that section dominated by a US citizen, Rupert Murdoch, notorious for misusing his media monopoly. For Murdoch and the politicians he imposes on this unlucky country, truth-telling is an irrelevance. Their speciality is to control the narrative, so the narrative about Assange was changed from his role as a truth-teller to the narrative of the US, that Assange was a traitor to the US (a country he is not even a citizen of!). In the country where he was born, his alleged leaders cravenly cowered to US pressure and the Murdoch bullies and abandoned this award-winning, world-famous Australian citizen.

It is a curious fact that Australia gave birth to these two contrasting transformative figures of modern journalism, Assange and Murdoch. It is the great shame of our nation that it participates in the persecution of one and allows its democracy to be manipulated by the other.

Julian’s bold bid to use journalism to save the world from hidden conspiracies has resulted in his extraordinary punishment, ten years of persecution, containment and silencing, with much more to come. Although scorned in his own country, he has earned planet-wide admiration, the martyr of Truth, transformed into one of the great World Historical figures of the twenty-first century.

All round the world, people will be celebrating Julian Assange’s 50th birthday on July 3. Please come along to Julian’s 50th birthday party at Bunyapa Park, West End and celebrate this great Queensland journalist with us.