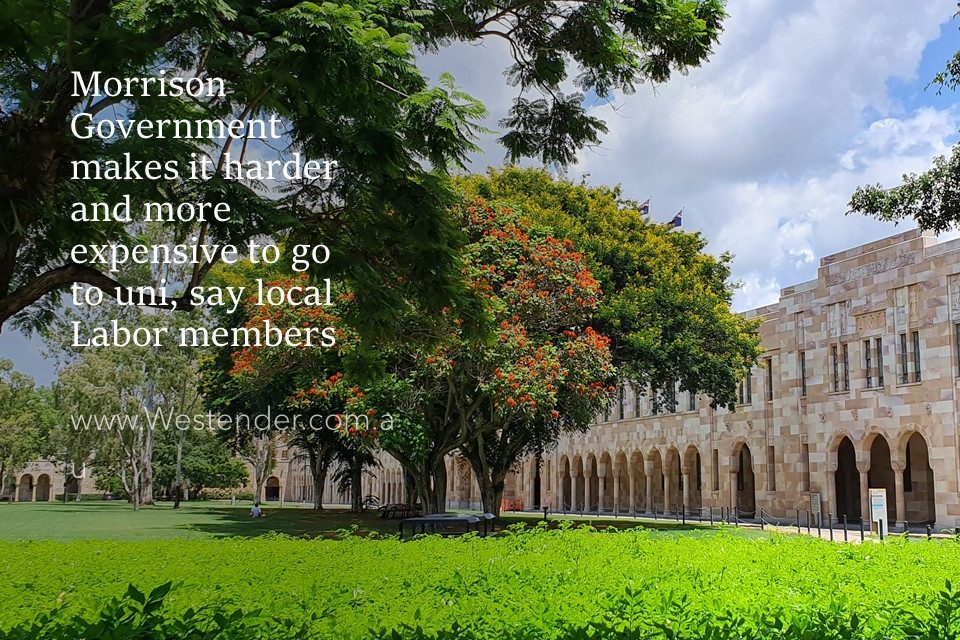 Federal Member for Griffith, Terri Butler, and State Member for South Brisbane, Jackie Trad issued a joint statement today, saying that thousands of Australians will miss out on university under proposed changes by the Federal Government.

Minster for Education, Dan Tehan, announced the Government’s planned overhaul of the university fee system at a National Press Club address on 19 June 2020, saying the Government’s goal is to attract more students to study at University, and to encourage them to study subjects that make them ‘job ready’.

But, Ms Butler and Ms Trad say that the changes will make it be harder for students to attend university and it will be more expensive.

“Young people have been hit particularly hard by this recession, and the Liberals are leaving them behind again.”

Subjects such as law, business and humanities, will see the most significant fee increases under the Morrison Government’s plan.

Ms Butler and Ms Trad argue that there is double the number of Year 12 students who want to go to uni next year, but that the Morrison Government is refusing to open up enough places for them.

“Thanks to Labor’s reforms to higher education, I was the first in my family to go to university.

“It’s not fair that Liberal Cabinet Ministers have reaped the rewards of a university education but will make it harder for young people to go to uni today,” Ms Butler said.

Jackie Trad said, “I know this will be shocking news for many Year 12 students on the Southside, who were already doing it tough”.

I’m from a working class family. Going to uni & incurring a debt was scary. But my Arts/Law degree changed my life. What impact will this proposal have on poorer kids? Will they be dissuaded from uni? Will education become a privilege for the few? https://t.co/RqlUuMZGQh

Ms Butler and Ms Trad say that experts and others have suggested that the Government’s plans won’t even have the desired effect in getting people into engineering, maths, science, nursing or teaching.

Criticism has come from some unexpected sources. Former Liberal Education Minister, now Chancellor of the Australian National University, Julie Bishop said in The Australian on 23 June 2020.

“My concern is that under these new arrangements, there is a greater incentive for universities to take in a higher number of law, commerce and humanities students than there is to take in students in engineering and maths…that appears to be contrary to the government’s policy intentions.”

Unions have also been critical of the Government’s plan.

“While we welcome expanded students places and lower fees in some disciplines, Minister . Instead he has outlined a plan to massively hike fees for humanities, law and commerce, asking students in those disciplines to bail out the Government and do its job for it.

“Australian universities have seen more than $4.5 billion in revenue destroyed by the COVID-19 pandemic. In their greatest ever crisis, the Minister appears more interested in fomenting controversy than grappling with this difficult reality.”

The proposed changes still need to be passed by Parliament, and both Labor and the Greens are opposed.

The Australian Financial Review (AFR) reported the Government will need the support of two of the three Senate crossbench parties to get the changes across the line. Jacqui Lambie is apparently undecided, and Centre Alliance is “inclined against the policy”.