Op Shops of West End – St Veronica’s is Back. 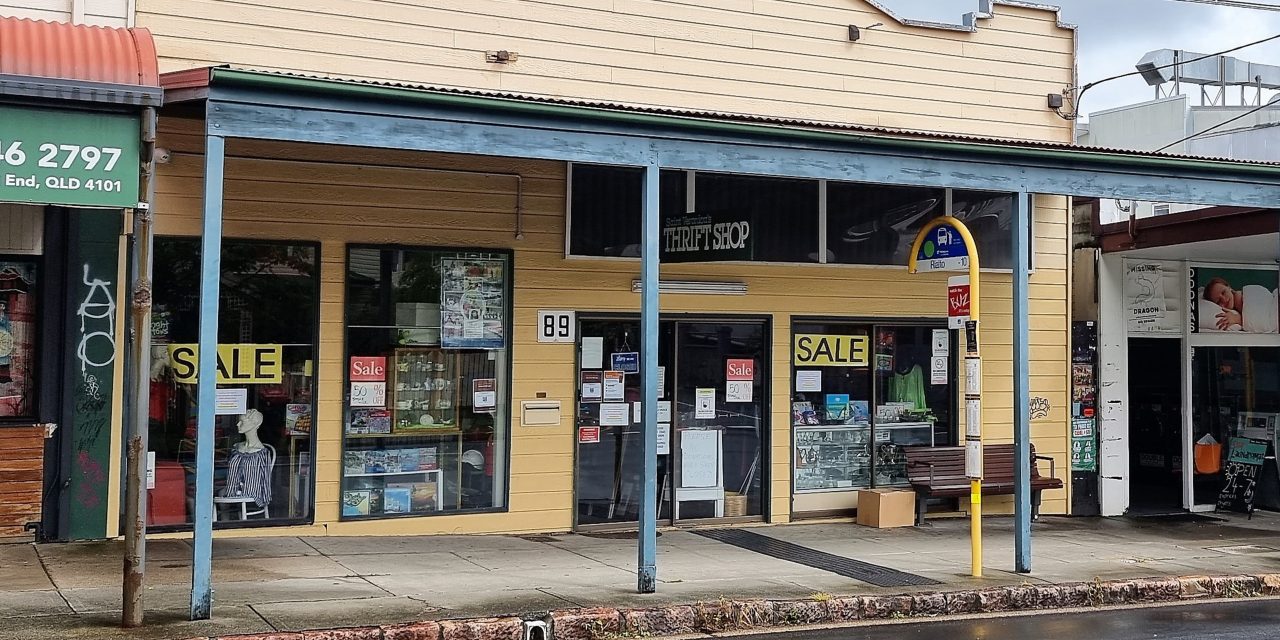 After closing for some weeks to weather the COVID and Omicron storm, St Veronica’s Thrift shop on Hardgrave Road will reopen on Monday, 28 February with a special sale.

St Veronica’s is the oldest (and for many their favourite) of the West End’s numerous op shops, so it is an appropriate place to start our series on local thrift and op shops.

The shop has that old-fashioned feel enticing to anyone who loves to hunt for a bargain – books, bags and shoes, hats, china and cutlery, bedding, and clothes compete for space.

Where do the funds go?

St Veronica’s is operated by a registered charity established 66 years ago by Eileen Bennett to raise money to assist refugees.

“It’s grown to focus on the education of poor children whose poverty prevents them getting an education. We firmly believe that education is the way out of poverty.”

“We are really proud that we’ve helped children become doctors, nurses, and engineers. Currently, we’ve got a young girl whose fees were preventing her finishing the final year of her course, and we’ve helped her pay those fees and she’s becoming an engineer very shortly.”

They also help communities become independent and sustainable, and the charity runs regular appeals for that purpose. For example, St Veronica’s recently helped construct a safe house for victims of domestic violence in Sri Lanka. In their latest appeal, they are raising medical and developmental assistance funds for the Gumuz people of Galiya Rogda in Ethiopia.

“When there’s a little bit of surplus money left over from the thrift shop, we use it for any sort of emergency. Late last year there was catastrophic flooding in Kerala in India resulting in a landslide. Homes were washed away, and we sent some funds over to help with that,” Margaret said.

Donations to the shop, what to give, what not to give

Unlike some op shops, St Veronica’s can’t take electrical items or large furniture because of the limited room at the shop. They do take clothes, crockery, DVDs, games, and books, but not text or computer books, because they quickly become out of date.

Quality is the key. Volunteers Sue and Faye (who has recently celebrated her 90th birthday) say they want good quality, clean clothing and merchandise such as manchester.

“No stains, no holes, something that you’d be happy to give your friend. No cracks, no chips, no stains. So, it needs to be something that we can just put a price on and put on the shelf. We do clean things if we have to, but, it’d be nice if we didn’t have to,” Faye said.

St Veronica’s does not want people dropping goods at the front door. In fact, it is illegal to leave items outside when the shop is closed, as it is deemed to be dumping. In addition, it can cost charities to get rid of things that are not of good quality, which is why most op shops no longer have 24-hour donation bins.

Don’t assume that the op shops can take an item if it’s not working or of good quality.

“We’ve had some awful material dropped,” Margaret said. “But the ladies here are amazing. If they get something that was reasonable but soiled, they take it home and wash, iron, and repair it. They really do miracles with the stuff that they produce.”

Among the unique items donated to the shop was a jar containing a ‘pickled’ cobra snake – and it sold.

Sue said St Veronica’s was given an amazing designer clothing collection from the 1930s.

“We often get old haberdashery – buttons and lace and things like that.”

St Veronica’s Customers vary from young people looking for some quirky clothes to people who are very needy.

“I’ve noticed that a few people have come here who have been working on film sets. We’re happy to fossick around and try and find what people are specifically looking for – if they’re looking for something special,” Sue said.

Margaret says St Veronica’s is unique in that money donated for a particular purpose is directed to the cause in its entirety.

“I personally don’t know any other charity that can guarantee that, because this wonderful thrift shop covers all of our admin expenses. No one here has ever been paid in the 66 years of our operation. There has never been a paid employee – we’re all volunteers.”

Volunteers are generally recruited through word of mouth.

“I’ve just almost completed our annual report and at the bottom I’ve asked people to consider volunteering because most of us are older. We are aware that we’re vulnerable and it would be nice to have somebody who knew the jobs involved and could take over if needed.”

While its founder Eileen Bennett was Catholic, volunteers come from all faiths,

Margaret says they have had students looking for work experience.

“Sometimes it’s amazingly good for them. We had two really shy boys; they came here and really related to some of the older women and it was just lovely to see them blossom. Parents have phoned and thanked us for what we’ve done.”

If you want to volunteer, telephone the office, and make an appointment for an interview.

Margaret, who started with St Veronica’s as a teenager and is now president, told me St Veronica’s is the happiest place she has ever worked.

“It’s a friendly and supportive environment – it’s something we’re very proud of.”

St Veronica’s closed in January to protect their older, more vulnerable volunteers from the new COVID strain raging across the state. Now the threat has eased, they plan to reopen on Monday 28 February, with a special grand reopening sale to celebrate their return.

When is was established, St Veronica’s Charity briefly used a temporary room opposite King George Square in Adelaide Street, in Brisbane’s CBD. They then moved to the School of Arts at Boundary St. West End (now the West End Library).  Margaret used to do the books for the Committee there (after working in the city during the day).

They then worked on the verandah on the St Mary’s Church Hall. Just over 40 years ago, a donor financed the purchase of the current shop on Hardgrave Road and they have been there ever since.