The ‘Oscars’ of Australian science awarded 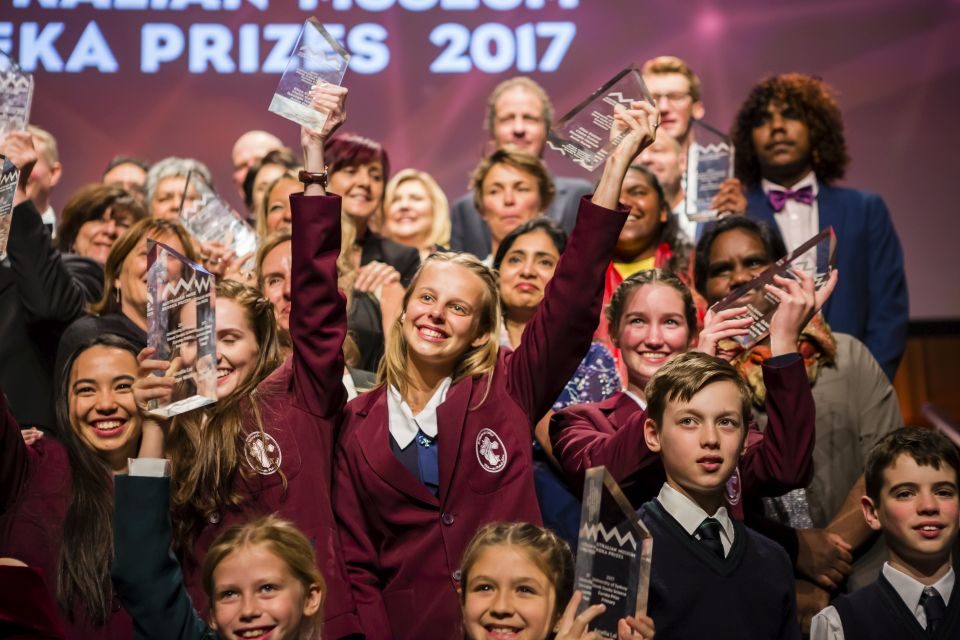 The nation’s most outstanding scientists have been honored at the 2017 Australian Museum Eureka Prizes Award Dinner, the “Oscars of Australian science”.

Australia’s premier science awards celebrated scientific breakthroughs from around the country, ranging from robots that are making Australia a world leader in farm automation, to technology that can reliably produce life-saving oxygen for newborns in hospitals.

Fifteen awards – worth $150,000 in prize money – were presented on Wednesday night (August 30), recognising excellence in science, research and innovation, scientific leadership and engagement, and school science across a broad spectrum – from environmental and innovative technologies, to national security, citizen science and for the first time, data science.

Eureka Prizes winners included scientists and researchers who have:

·         developed a blood test that is twice as effective at detecting recurrent bowel cancer as existing methods;

·         designed low-cost and reliable technology to help save the lives of newborn babies who die from a lack of oxygen and related lung infections, such as pneumonia;

·         developed commercial robotic systems to boost Australia’s competitiveness in the fields of farming, aerospace, transportation and mining; and

·         developed super-powered lasers to defend Australia against modern threats from drones and missiles.

“The Australian Museum Eureka Prize winners are helping to tackle some of the greatest challenges facing humanity and the planet,” she said.

“Australian scientists are world leaders in discovering ways to combat climate change, disease and threats to national security. Their scientific breakthroughs offer us insights into the innovations that will fundamentally change the way we live and work. The Australian Museum Eureka Prizes also recognized the importance of often-overlooked areas, such as scientific mentorship and school science,” she said. “Our award winners are fostering the nation’s next generation of scientific leaders and researchers.”

The winners of the 2017 Australian Museum Eureka Prizes were announced at a gala ceremony at the Sydney Town Hall on August 30, which was attended by Australia’s Chief Scientist Dr Alan Finkel AO, NSW Governor David Hurley, NSW Minister for Resources, Energy and Utilities, and the Arts Don Harwin MLC, NSW Minister for the Environment, Local Government, and Heritage Gabrielle Upton MP, NSW Chief Scientist Professor Mary O’Kane AC and leaders from the fields of science, government, industry, academia, research and innovation, and the media.

Queensland winners of a 2017 Australian Museum Eureka Prize were Associate Professor Andrew Brooks and the Catchment Sediment Budget Research Team from Griffith University, in Queensland, who have been awarded the NSW Office of Environment and Heritage Eureka Prize for Environmental Research for their studies into what may be Australia’s best chance of doing something timely to help save the Great Barrier Reef. They have identified new ways to dramatically reduce the damaging impact of sediment runoff, one of the most significant threats to the natural wonder – next to climate change.

For the second year in a row, students from St Monica’s College in Cairns have won the University of Sydney Sleek Geeks Science Eureka Prize for Secondary students. Year 11 students, Claire Galvin and Anna Hardy, (who won the same category last year) were joined by Eliza Dalziel and Georgia Hannah, from Year 12, to create a film that explains the importance of dung beetles in our ecosystem. With their film, Manure You Know, they explain – using animation, video and experiments – how one of the world’s hardest-working insects has helped farmers on the Atherton Tablelands in Queensland improve their farming practices.

Dr Hoggett and Dr Vail have been recognized for their outstanding work managing the Lizard Island Research Station for close to three decades, helping bring the plight of the Great Barrier Reef to the fore.