Why Possums Are Jerks 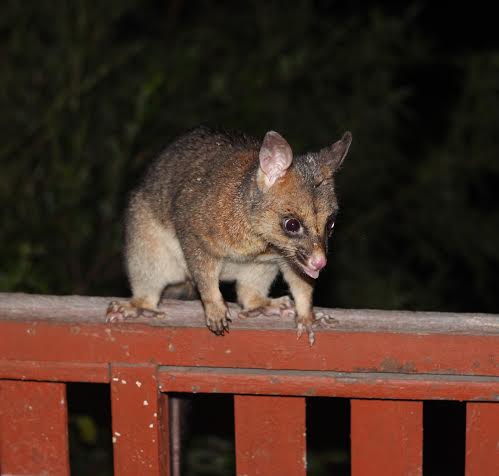 The gang of one on Kaya Ra’s balcony

It was about the time that I was shuffling around nervously just outside my share-house’s kitchen with a giant inflatable toothpaste tube that I wondered, ‘are possums really that cute?’

The novelty toothpaste tube in question was one that I had acquired at my supermarket job, a relic of an enormous dental hygiene display. It was the only thing big enough when held out in front of me to create a barrier between me and the possums that once again had gatecrashed my kitchen for some rubbish bin dinner. The possums were a real pair of jerks – a little furry two-member gang who found every possible way into my poor student household to feast on the wrappers that had already been licked clean by my housemates and I. They held their fuzzy reign of terror by scurrying around the house threatening a future of tetanus shots and trauma-stories if any of us got too close.

Now I don’t have anything against small furry animals; in fact I’m quite partial to anything with a cute nose and paws. But as an Australian living in a warm inner-city suburb – and I’m sure most of my similarly-situated readers will agree with me here – possums kind of suck.

Growing up on semi-rural property instilled in me an excitement about possums, as their visits were as much as a scurry along the verandah with a pause to show off their adorableness. I took this soft spot for the critters to the city with me when I left home, and even at first letting the possums clamber into the kitchen and warily munch a banana while I watched was enough to have me squealing in delight. But then came the mornings after a hot night when my housemates or I had left a window open, to find fruit strewn over the floor and not even a thank you note.

My love for possums began to especially decline after the night when my housemate woke up screaming with a possum at the bottom of her bed scoffing cat food – even the cat was too scared to get involved. A few months after that, the same housemate was scratched by a different possum when she got too close to its territory (her curbside bin), and not long after another friend told me of her brother who left his bedroom window open and woke up with a possum on his face. On his face. The idea of possums slowly began to become synonymous with the idea of terror incarnate.

My one defense when others told me of their anger at possums was always, ‘but they’re so freaking cute!’ But after all that I have just divulged to you, when it came to that night when I stood in my pyjamas, clutching a giant blow-up tube of Colgate Total and too terrified to walk into my own kitchen, it really got me to questioning everything I had stood for. Now, after years living in Brisbane spent locking my windows against the creatures, when others complain about possums I just nod and pat their backs in silent understanding.

On that night with the toothpaste tube particularly, I found myself thinking, ‘what can be done?’ When I visited New Zealand at thirteen I remember being horrified at a shop that sold possum-fur everything, from your average garden variety jackets, to furry nipple tassels. The idea of turning gorgeous little possums into clothing made me very sad when I was thirteen, but that night after cleaning up a knocked-over rubbish bin and broken plates from the torn-open cupboard, the thought of possums as nipple tassels was vaguely comforting. From a calmer perspective, I have realised that possums may be jerks but I’m not going to wear them on my private parts as revenge. Instead, I’m simply standing up for the right for myself and others to defend our homes and label possums, without guilt, as what they are – furry little douchebags.