We remember those lives lost and recommit to action 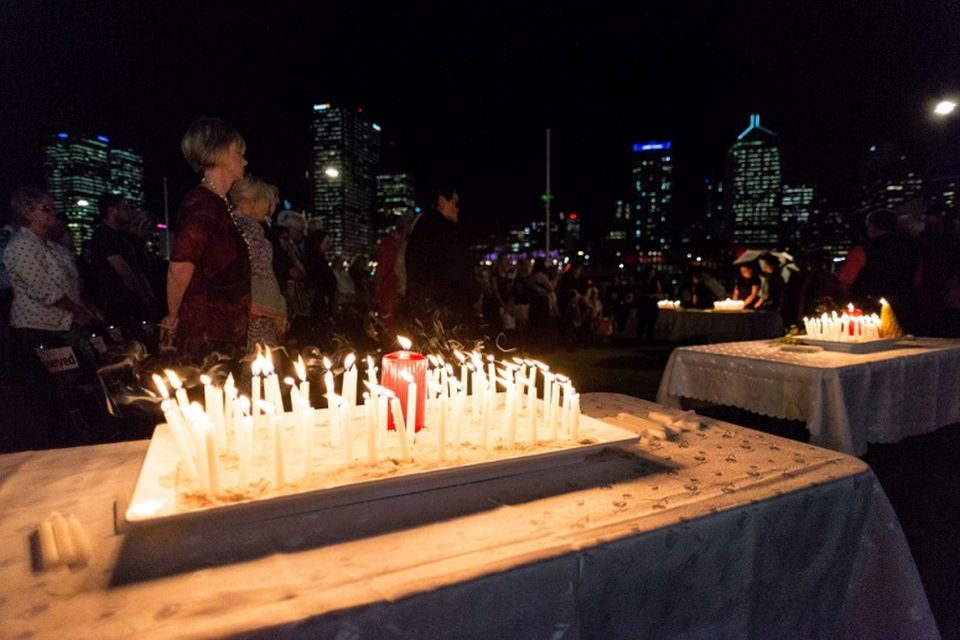 When Mauryeen Kenny aged 69 was stabbed to death last month at home in Stafford Heights, Brisbane the number of women killed by their husbands or partners in Australia rose to 17 so far this year.  At this rate, we are trending towards the alarming national total of 73 in 2016*.

On Wednesday night, night under the glow of candle light, hundreds of people gathered in Brisbane, and at vigils all around Australia, to remember the life of Mauryeen and many women like her who have been killed by those who were meant to love and care for them—their husbands or partners.

This is the 12th year that the National Day to Remember vigil has been held in Brisbane. Once again those of us who gathered lit candles and shared stories to remember the lives of these women.  Importantly, we recommitted ourselves to action.

The courageous families who have endured the loss of women and children as a consequence of domestic violence, continue the call for changes in community attitudes and more effective systems of protection and safety.  They grieve the loss of their mothers, sisters, daughters, brothers and friends but they hope that that these lives are not lost in vain.

There are some heartening reforms underway in Queensland.  As I lit a candle, my own thoughts focused on how important it is that we continue the community ‘awakening’ that has been occurring. Domestic violence was seen by lots of people as a private family matter. But now thanks to the relentless efforts of advocates like Rosie Batty, domestic violence services and many more people, we have an unprecedented commitment to tackle domestic violence through a National Plan backed by State/ Territory plans and funding commitments.

The domestic violence laws have been strengthened, including laws to deal with attempted strangulation. We have new integrated domestic violence services and high risk teams to manage the offenders who are at greatest risk of seriously harming their partners and children.

Our team at the Brisbane Domestic Violence Service is working much closer with the Queensland Police Service. We collaborate through the 24/7 Safer Lives Mobile Service and we just recently struck up an innovative partnership with the Police on the northside of Brisbane— a pilot, Project Phoenix in which the Police and a specialist domestic violence worker co-respond to domestic violence occurrences.

The interim findings of the Project Phoenix evaluation show that women who are harmed feel much more willing to take action when they get prompt support by Police and a domestic violence worker together. They want to know that the violent partner is held accountable by the Police. They are then more willing to provide statements to the Police, seek help and break away from the relationship.

The reforms are promising. We still have a lot more work to do though to create housing options so that women do not persist in violent relationships, because they feel they cannot afford to leave or that they have nowhere to go.

The evidence also shows that unless we all start taking action when children are very young—to instil in them the importance of respect in relationships, of treating each other as equals—families will continue to be shattered by domestic violence.

In the media reports following the murder of Mauryeen Kenny a neighbour stated in disbelief that “they were just normal like the rest of us”. The shroud of secrecy that keeps so much domestic violence hidden behind closed doors, must continue to be lifted.

If you use violence, if you are experiencing domestic violence, or know someone who is harmed, help is available.