Be ready to govern, or die: Socrates now 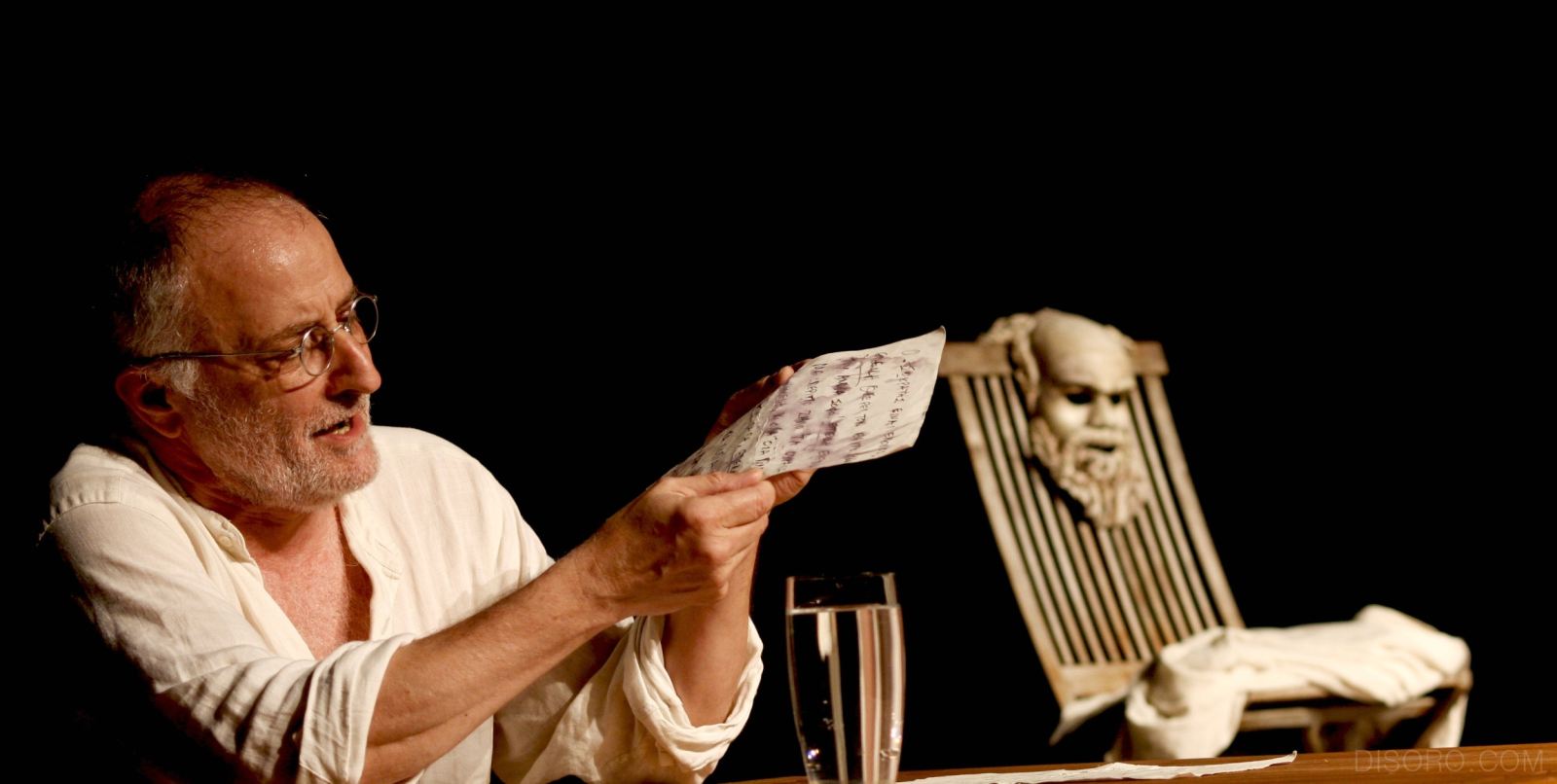 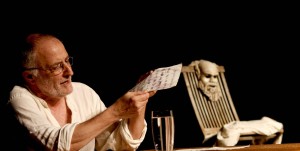 Socrates was in West End last Friday, at the Greek Club reminding us all that originally democracy was the government of peers, in which officials were regularly and randomly selected, not by voting, but by lot. Random chance selected the leader among equals, in the army, the executive, in the judiciary, for the jury that condemned Socrates to death.

Think about that for a while and you will begin to understand the significance of this performance and why it has played in over 300 theatres in 15 countries across five continents.

The apology of Socrates

Convincingly channelled by by Yannis Simonides, Socrates defends himself against charges of sedition: Specifically, “corrupting the young, and by not believing in the gods in whom the city believes, but in other demons that are novel”.

His defence was recorded at the time by Xenophon and others and then later by Plato as The Apology of Socrates, first performed six years after Socrates execution.

Socrates argues against his charges on the basis that he claims no special knowledge, he simply punctures the self-importance of those who do. He acknowledges that this is annoying and frustrating for those in power but claims this is fundamental to the operation of a democratic society.

He points out that if he is to be executed for corrupting the youth then he must be a uniquely corrupting influence, otherwise all the other corrupters would need to be executed as well. This cannot be the case, he argues because there is nothing special or unique about him, he does not teach a philosophy or ask them to follow a creed, he simply discusses, one on one, with individuals what the principles of Greek society mean to each and every one of them.

In the one excursion into sophistry, or rhetorical flourish, he argues that the accusation that he does not believe in gods is annulled by the accusation that he believes in demons who are in fact themselves demi-gods. While entertaining, I found it the least useful of the arguments put forward as it goes nowhere and teaches us nothing. That is a characteristic of all arguments about faith, however.

Socrates is found guilty and we get to enjoy his sentencing plea and then his response to the sentence of death.

During the plea, he proclaims that it is dishonourable to beg for a reduced sentence, or to appeal against the judgement of his peers. It is better to die than beg, as it is in the interest of the state and democracy itself that we should all defend our beliefs to the death, rather than desert them to protect ourselves, our wealth or status. It is good for democracy that those who challenge its principles are hauled before the court and forced to choose between their principles and death.

It is in the final act that he goes all the way to argue that we must not fear death, which may be wonderful or may be nothing, because it is that fear that enables the state to reduce us to slaves rather than operate as free men.

By the time Socrates is hauled off to death row, a cave where he must wait a month for the sacred ship to return to Athens, we are totally captivated. Most of the audience at West End’s Greek Club had fallen completely in love with the character spun so charmingly by Yanni (Yannis Simonides).

Even those who like their politics simplified by the clarity of might and money, expressed admiration and awe that one man could hold hundreds of people spell bound and delighted for eighty minutes. Yanni presents a very human, very funny and quite irreverent Socrates who is at once a man of the people and a character of great wisdom.

Emmy Award winner Yannis Simonides channels the eccentric and magnetic personality of Socrates and offers a profoundly social, political, but above all human work which captivates the audience with its immediacy and simplicity.

The wisdom of the Ancient Greek philosopher is, in an ever-changing world, and in the search for a life of meaning, more relevant now than ever before.

Yannis is a Yale Drama School trained actor/writer and Emmy winning producer. He was professor and chair of the NYU Tisch Drama Department, producer of GOTelecom and director of Hellenic Public Radio in New York. He is the founder and director of the Greek Theater Foundation (Elliniko Theatro) of the U.S.A. and Greece, in its 35th successful year. His performance work ranges from Euripides to Shakespeare to pieces adapted from the writings of Cavafy, Makriyannis, and Gogol. Among his patrons are the National Endowment for the Arts, The Greek Ministries of Culture and Foreign Affairs, The A. S. Onassis, Time Warner and Mobil Foundation.

He has embodied the role of the great philosopher for Socrates Now, in 300 performances in 15 countries at theatres, festivals, schools, organisations and universities. He has staged marathon audience-participation Readings-Celebrations of the Iliad and Odyssey at the Library of Alexandria, the Dahesh Museum and the 92nd Street Y in New York, and in Troy, Chios, Kos, Delos, Pylos, Malta, Sicily and Ithaca, at the Getty Villa in Malibu, at the Halles de Schaerbeek in Brussels and at the Hellenic Centre in London for the 2012 Olympic Games.

In 2009 Yannis Simonides was honoured by the city of Athens as Ambassador of Hellenism for his lifelong service to Greek culture worldwide. He was invited to speak at TEDx ACADEMY in 2012 and performed for the Ecumenical Patriarchate in 2013.

The title, The Apology of Socrates, appears ironic as Socrates does not apologise, in fact, he damns the pompousness of the accusers and their rich and powerful backers and argues for the rational rather than emotional support of his peers, the jurors who will decide his fate. In reality, though, it is a simple shift in the meaning of the word apology from its ancient meaning of “explanation” to our current emphasis on the expression of sorrow or regret in the acknowledgement of wrongdoing.

I am not a student of philosophy, I cannot comment on what is most important in Socrates’ philosophical framework and how that has influenced thought over the last two and a half millennia. His argument that mingling philosophy and politics is bad for integrity, sincerity and longevity, though, drove home like a knife. A veteran of four federal election campaigns, all fought on the basis that we need integrity at the core of our political system or democracy is doomed, I have been forced to deeply examine my core belief that politics can change the world for the better.

I was all ears, then, when after a short break, the discussion began. This, Yanni told us, has been a feature of all 300+ performances since the Socrates, Now project began.

Largely employing the Socratic technique of asking questions to develop the audience’s own response to the material, Yanni stepped lightly through

As with Socrates dialogues, however, a clear agenda emerged from the apparently open questioning.

The key difference between enlightened government by rational reflection and the tribal belief in power of gods and kings, is that we are responsible for our own destiny. That we each must stand up and take responsibility for our actions and the potentially negative impact they have on others. Athenian democracy was codified by Solon in 594BC specifically to refine the operational democracy that had evolved in military Sparta.

The selection of officials by lottery, for a single term, which could never be repeated, meant that all members of an assembly had to be ready to lead, and accept that they might be led by any one of their number.

The corruption of democracy begins not with the role of the military or the influence of money, it begins with the replacement of the selection by lot, with the selection by the vote. As soon as citizens vie with each other for the vote, then the vote is sold. It is no longer the interests of the state that are at stake, it is the interest of the voter: that selfish individual who appoints representatives of their own interests.

My fifteen years active engagement in the political process has only heightened my awareness of how perceptive and powerful this observation is.

We argue on a daily basis about the value of democracy, the role of government and the means whereby we may correct the excesses of the oligarchy that rules us. All that discussion takes place, though, on the assumption that the vote is at the core of democracy. It is not.

For thirty short years, until the first dictatorship around 560BC, the experiment worked. It was an experiment that changed the world, but we have lost sight of the key precept that underpinned it.

Perhaps it is time we tried again.