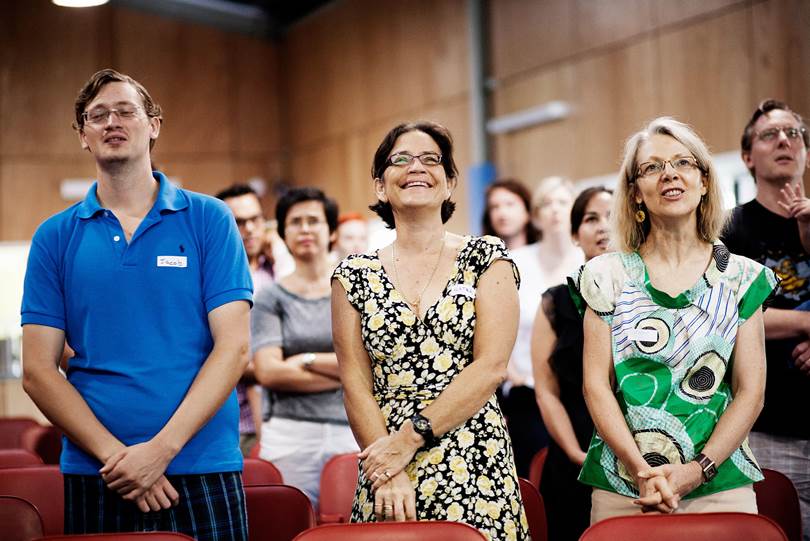 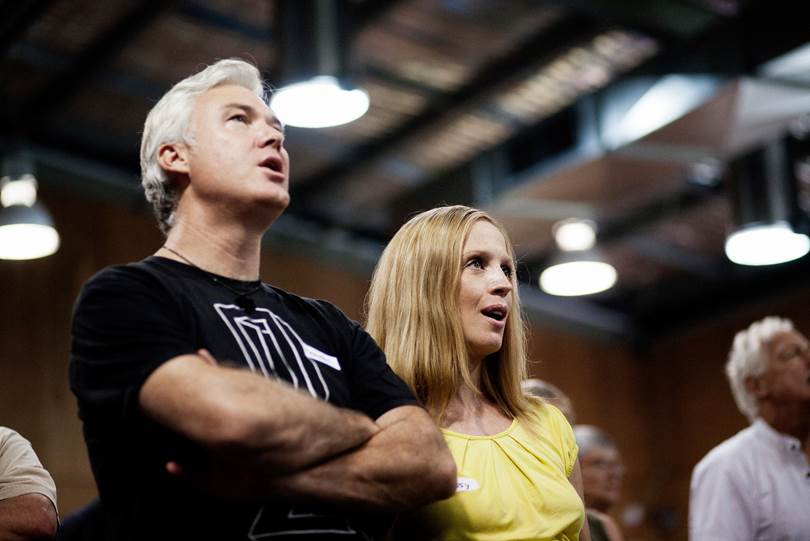 Church is about God isn’t’ it?

Or so I thought until a few weeks ago when I first attended the Brisbane Sunday Assembly.

I’d read a little of Alain De Botton’s 2013 book “Religion for Atheists: A Non-believer’s Guide to the Uses of Religion”, but still wondered what a god-free ‘church’ would be like, and why you would want one in the first place.

I put these questions to Anne Reid, who I had met when she was the Secular Party candidate in Griffith in the 2013 election. Anne invited me along to the Brisbane Sunday Assembly to see for myself.

Anyone stumbling into a meeting of the Sunday Assembly for the first time could be forgiven for thinking they were in a church. The group meets in a school hall but so do a lot of religious groups these days.

The meeting commenced with music provided by a live band (with clapping and singing along), followed by a reading, a key speaker, a word of testimony, more singing, and some silent contemplation. 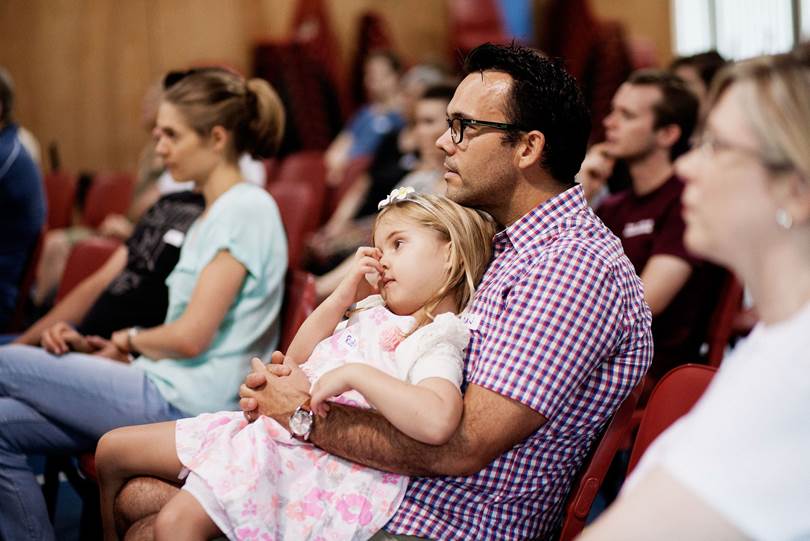 The congregation is much like any other Sunday gathering

This structure was familiar to me from my past life in a Protestant community church. The similarities stop however with these outwards trappings.

The songs were not hymns: on the day I attended, songs included Cat Stevens’ ‘Peace Train’ and John Lennon’s ‘Imagine’. The reading was not from the Bible: it was a poem titled, “A Square Deal” by iconic Australian, CJ Dennis. The key speaker was not a minister or priest, but a professor of quantum physics (and the custodian of the world famous Pitch Drop Experiment) at the University of Queensland. Professor Andrew White did not present us with a sermon or a homily, instead, he gave an amusing and accessible overview of an aspect of his work.

This is certainly not church as I had known it.

In the final segment of the meeting, Chrissy Dunaway, one of the founders of Brisbane’s Sunday Assembly, explained why, as an atheist, the concept and practice of Sunday Assembly are important to her. Brought up in the Mormon Church in the United States she came to a point where she could no longer accept the religious dogma and she left. Her mother, she said, characterised her life after Mormonism as a being like “a ship without a rudder” and that, she said, was a fair description of how she had felt. Ms Dunaway said that what she had been looking for was a philosophy and a supportive community; the very things that she had lost when she had left the church.

The concept for Sunday Assembly began just one year ago with UK comedians, Sanderson Jones, and Pippa Evans. They say on their website that, “they wanted to do something that had all the best bits of church, but without the religion, and awesome pop songs.” In the short time that has followed, Sunday Assembly groups have been established in a number of UK and US cities, as well as in all mainland Australian capital cities. The Brisbane Assembly attracted over 200 people to its first meeting and around 100 people routinely attend its monthly meetings.

Asked if he is happy with the non-theist basis of Sunday Assembly, Grant said, “I love the community spirit here, and the three point philosophy: ‘live better, help often, and wonder more.’” Adding, “It is awesome, it’s the community coming together to celebrate life.” 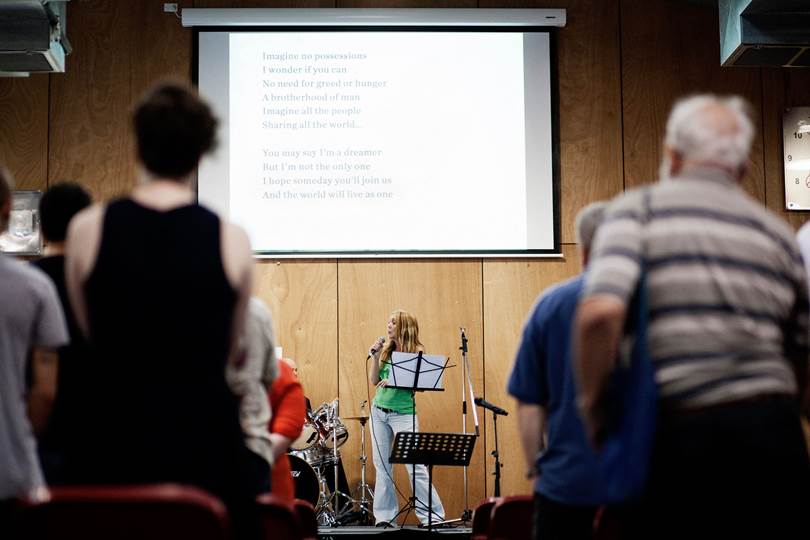 The ritual is familiar to those brought up in a church

Commenting on the Assembly’s work with Signal Flare, Ms Reid said that some people think that charity is the province of the churches, “but I have been openly atheist for some time, and I have been involved in a lot of charity work.” “In that [charity] scene,” she said, “the question is always about what church you belong to. The assumption being that only the religious do charity work. I would very much like to change that perception”.

Ms Reid considers that in the future Sunday Assembly could provide a base for the many overseas students she meets. Such students, she said, are often in need of a community in Australia, and they are frequently drawn to the churches for support. She thinks that it could be important to have non-religious organisations available to these students to help them navigate the basics of living in a foreign country without the associated belief system.

Both Ms Reid and Brisbane Sunday Assembly President Cameron Reilly said that criticism of Sunday Assembly has mostly come from other atheist organisations which consider it is too similar to a church. Ms Reid said this was a pity because, “atheists come in all ‘makes and models’ and all outlets of atheist expression should be encouraged.”

Mr Reilly said, “We really do like people, and we like community, and we want to help other people. This criticism that atheists should not get together as a community just doesn’t make a lot of sense to me”. He added that the structure of the meetings is intentionally similar to a church service, “we deliberately take what we think are the best parts of religion, because it works. What a lot of people are looking for is a community and that sense of knowing your neighbours, and having a group of people you care about, that care about you…that you share some common interests with”. “The thing with Atheism,” he said, “is that it tends to be a solitary thing. You may be part of a music group, or a sports group, but nothing that really talks about how you live your life, about how you support one another in times of need, what your philosophy is. I think there are a lot of us that are yearning for something like that.”

De Botton says much the same thing in ‘Religion for Atheists’. “For too long non-believers have faced a stark choice between either swallowing lots of peculiar doctrines or doing away with a range of consoling and beautiful rituals and ideas.”

I asked Mr Reilly whether Sunday Assembly will create its own rituals to mark life events, such as births, marriages, and deaths. He said that he and his partner have a baby due in 3-4 weeks, and they have been talking about how Sunday Assembly will welcome this new life. “Those sorts of rituals are an important part of the human experience and an important part of being a community: celebrating and supporting people through major life events.”

Sunday Assembly meets each month. For more information on their meeting times and events, see the Sunday Assembly website or look them up on Facebook.

For Signal Flare’s next event see their Facebook site.

I’d like to thank Jo Stevens for providing the images that accompanying this story.