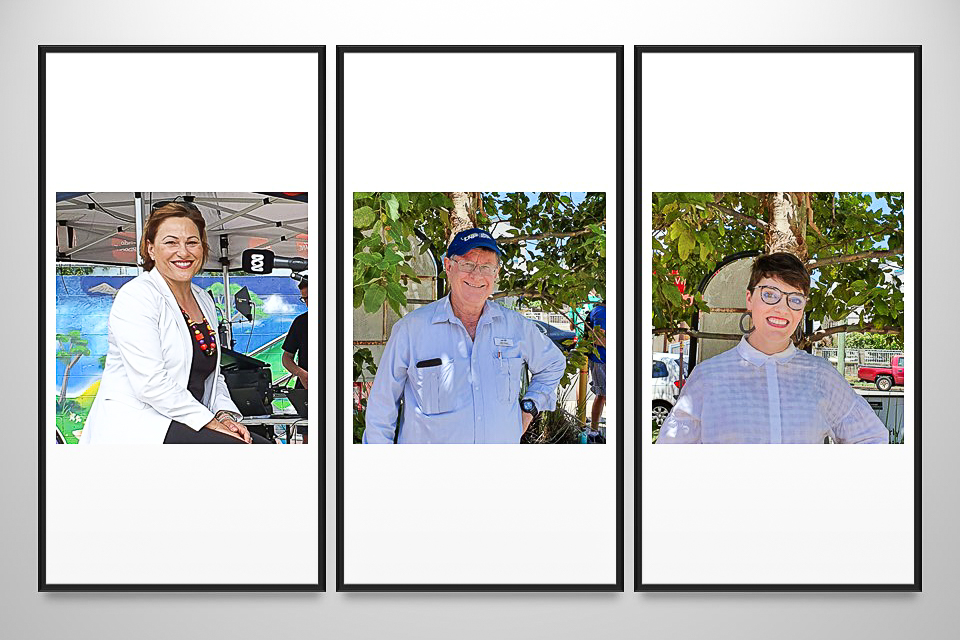 It’s been a hard-fought campaign in South Brisbane, and at times very personal. There has been graffiti, vandalised and stolen yard signs, and a vitriolic social media battle largely between rusted on Greens and Labor followers.

We have also had a flurry of candidates’ forums, and probably more has been written about South Brisbane and its sitting member, Jackie Trad, during this campaign than about any other Queensland electorate or candidate.

Today, just two days out from the final day of voting, Extinction Rebellion unfurled a banner depicting Jackie Trad at Parliament House. The sign featured a quote from the film Mean Girls, a reference to an earlier incident between the Greens and Labor in South Brisbane. The banner was delivered along with a load of manure.

The Courier-Mail reported that Extinction Rebellion had called this morning’s disruption a “highlight (of the) Government’s failure to address the climate crisis.”

So, before we got onto their final pitches, the three key candidates were asked about today’s incident and what it means for local politics.

Amy MacMahon said she was not aware of today’s action by Extinction Rebellion.

“You’re going to have to go and talk to Extinction Rebellion specifically about their choice of tactics. But I think what this represents is a broader community of people who don’t feel listened to by their representatives and are trying to get their message out about the kind of climate action that we need.”

“Let’s call them out for what they are. They’re targeted, they’re personal and they’re abusive.”

“We are all passionate about taking action on climate change, but this zero-sum political game that the Greens political party plays, saw the demise of the ETS under Kevin Rudd, and the absence of climate policy in Australia since that time in 2009.”

“This is not advancing our state, or the cause, or the very real things that we need to do around climate and increasing renewable energy. I’m proud of our track record when it comes to renewable energy. What happened today with Extinction Rebellion, and the Greens Party, is not how I want our democracy to go. I don’t think it’s fair. I think it puts people off the very important issue that we want them to pay attention to.”

LNP candidate Clem Grehan said nobody wants to see that type of politics played out.

Jackie Trad it seems has become a convenient emblem of all that both the Greens and the LNP think is wrong with politics in Queensland.

Mr Grehan said that while she has been cleared of wrongdoing by the Crime and Corruption Commission, the matters investigated have raised doubts in the minds of voters about whether Ms Trad can be trusted.

Asked why he thinks Jackie Trad is ‘greener than the Greens’, Clem Grehan said:

“Jackie has put into legislation things that have impacted very badly on agriculture and on mining. She’s put it into legislation. We [LNP] and most other Queenslanders want to see Jackie Trad gone.”

Mr Grehan has also said he doesn’t want to see another Jonathan Sri or Extinction Rebellion in South Brisbane, so asked how he feels about the very real possibility the LNP’s preferencing decision may result in a Greens candidate being elected, Mr Grehan said:

“We think the Greens will be ineffectual. I don’t think Amy will be effective.”

This is not news to Ms Trad.

“There’s no doubt that the LNP want to get rid of me because they know that I am effective.”

“They’ve made the calculation: it’s very tactical, it’s very targeted. They want to take out the effective local member who is not silent on the issues that we care about most: renewable energy generation, voluntary assisted dying, same-sex equality. They want to take out a person who they know has been able to lead significant reform in this state for the better future for all of us.”

“This election, as we all know, is going to come down to the wire. This seat, I believe, is going to determine whether or not we have an LNP government in Queensland for the next four years.”

Bringing the community back together

The vitriol that seems to have been an element in this campaign suggests there may be some divisions to heal after this election.

“We do need to do a lot of healing in our community. I have absolutely no illusions about that. And I want to play a constructive role. And I would hope that others do too,” Jackie Trad said.

Ms MacMahon said that if she is lucky enough to get elected, she has a lot of ideas about connecting with the community.

“The heart of the Greens party is commitment to grassroots democracy, and connecting with people. And that’s what I’d be hoping to do over the next few months, with the help hopefully, of my Greens colleagues as well: reaching out to people from all walks of life and all political backgrounds, to have conversations about where Queensland is going, how we’re going to get out of this recession, how we’re going to make sure we’re investing in jobs and infrastructure. I’m really looking forward to that.”

Mr Grehan says he is a reasonably moderate guy.

“I can get on with a heck of a lot of people. I have lived and worked overseas. We’ve got a couple of adopted Thai boys that have been in our family for many years, and I can work with any people from any race, any religion. I’m very approachable, and I’m very moderate and very tolerant. So, I would certainly be able to build bridges and get things back on an even keel. I did even offer to work with Councillor Sri.”

“The LNP is the only government that can build infrastructure. We’ve got six dams on our books. We want to four lane the Bruce Highway. There are jobs that will be created. And we have the background and the ability to deliver and, I’m the type of guy that can do that. I’m not an ex-unionist or an academic; I’ve got 35 years of work experience. I know exactly how to put those projects together and to get them out the door and build them. I built 45 school buildings in one year from scratch. So, the LNP has got a whole bunch of really good candidates from diverse backgrounds across the board, who can deliver for Queensland.”

Ms MacMahon said she is excited about the campaign the Greens have run.

“We know that people are really excited about our vision for Queensland. We know that Queenslanders want big companies to pay their fair share, we know that they think these big corporations have too much power. And we have a plan where we can say to these companies; enough is enough, it’s time to pay your fair share.”

“We can fully fund our health and schools. We can have free public transport. We can have school lunches for every Queensland kid. We can expand our health care system. And people have been really resonating with this message on the ground, and we can see that Greens support has been really surging.”

“This is a critical election. It’s so important in so many ways. Whether we meet our renewable energy target of 50% by 2030, which we are on track to do: that will stop under an LNP government.”

“Whether we have the health and education services that our community desperately needs: that won’t happen under an LNP government. And whether we get the type of reforms like voluntary assisted dying, that our community has been crying out for, for a long time: that won’t happen under an LNP government. We will see harmful reforms like abortion law wound back. All of this is at risk.”

“South Brisbane is going to be an incredibly important seat as to whether or not we have an LNP government in Queensland. It’s as simple as that. We know things are tough right now across the state. South Brisbane could very well determine whether or not we have an LNP government or a Labor government. It’s been clear from the LNP and Clive Palmer’s very tactical and targeted strategy that they know that South Brisbane is important. It’s come into play. And that’s why they are preferencing the Greens above Labor.”