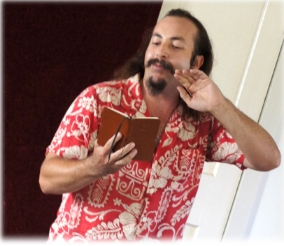 Urban Voices, a celebration of poetry organised by Westender’s Kerrod Trott was held at the Boundary Hotel last Friday and was a resounding success. A dozen poets entertained, challenged and moved about thirty Westenders in the upstairs front room at the Hotel. The hotel, along with other Westend businesses provided $50 gift vouchers to the winning poets for their efforts.

The overall winner on the night was Ash the Poet with “Knockout  Blow” a poem that lived up to its name, taking out the popular prize, the overall winner and the prize for the most “form”. Prizes were also awarded for power, grace and joy.

A good mixture of traditional Aussie doggerel, more intellectual word play and dark theatrical works were presented on the night.

A notable feature of the evening was that all the performers were male. One female poet registered on the website but did not show. A number of female poets attended just to watch. Westender invites any women with ideas about developing poetry by women to put them to us,

Perhaps the greatest irony of the evening was that I waxed lyrical (I wish) about violence toward women in our community and invited women to submit articles to Westender in an effort to shift the culture immediately prior to the performance of a piece about a stalker who murders the girl in Room 22. The disturbingly realistic portrayal of the stalking and murder won no prize on the night but was certainly the talk of the town for the rest of the evening. Sasha can rest easy that he made an impression: His performance realistic enough that the domestic violence workers in the room invite his girlfriend to call them anytime she needs help.

The evening was the culmination of a poetry extravaganza in West End celebrating World Poetry Day. Kurilpa Poets took to the streets under the guidance of editor, Kerrod Trott. The Poet Police were called in to drag the Reverend Hellfire from off the tables in the Archive after he offended punters with a rant about religion. A great initiative by Kerrod to unleash Kurilpa Kulture in the community and keep West End weird.