On a wet Friday evening on 22 August West End locals packed into Avid Reader Bookshop for a charge of West End history: the launch of the West End Making History Group’s third and latest walking guide, Walking with Water Rats … Kurilpa Point to Davies Park and Beyond. They were joined by special guests, Sam Watson, Heritage Architect, Peter Marquis Kyle, and Annie Keys from the walking guides’ funding body, the Department of the Environment. 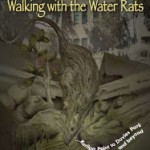 The evening was a mix of celebration and protest, coming as it did in the same week the Brisbane City Council launched its Kurilpa Riverfront Renewal master plan, a plan that, if fulfilled, will result in massive change to the local landscape.

Billie Cummins kicked things off with a wonderful didgeridoo performance and a moving reminiscence of boyhood fishing expeditions to the nearby river.

Former Mayor and member of the West End Making History group, Tim Quinn, considers that by knowing our local history, we get to know ourselves. “It is very difficult for us to recognise who we are and where we might go in the future unless we understand our history,” he said. 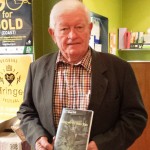 The trail lists three state heritage listed buildings: the Coronation Hotel, the Gas Stripping Tower and the Thomas Dixon Building. While these building are protected, Tim thinks other important buildings have a far less certain future and if we value our heritage, they should be fought for. They include the delightful Foggitt Jones building at the northern end of Montague Road, the art deco facade of the Stewarts and Lloyds building near Parmalat, as well as the original Parmalat façade itself.

The disquiet in the community over the Kuripla master plan comes, Tim thinks, from a lack of consultation extending over the past 10 years. “I don’t think too many political figures responsible for making those decisions have been out to this community in the last 10 years”, he said, adding,

“We would warmly welcome the Lord Mayor on one of the walks”.

On Sunday Tim led about 60 residents on the first walk based on the guide. Joining us were other members of the West End Making History Group, Helen Abrahams, Pam Bourke, Steve Capelin, Fiona Stager and Phil Vanderzeil.

In its first Street Walker‘s Guide to West End published in 2010, the West End Making History Group exhorted its readers to,

“Slow down. Leave the car at home. Take to the streets”.

With the links to our past under imminent threat, now more than ever, is the time to follow their advice. 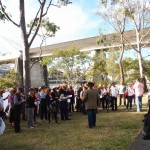 Copies of the book can be obtained from Avid Reader Bookshop and keep an eye on the website for details of future walks.

For people interested in talking to them about the draft Kurilpa Master Plan, representatives of the Brisbane City Council will be at the West End Markets in Davies Park on Saturday 30 August, from 8am to12pm.

The West End Community Association will be holding a public meeting on Wednesday 3 September, from 6-7 pm at the South’s Leagues Club, West End. A number of the West End Making History group members will be there.

Click to hear an interview with Tim Quinn as broadcast on ABC 612 on Monday 25 August.