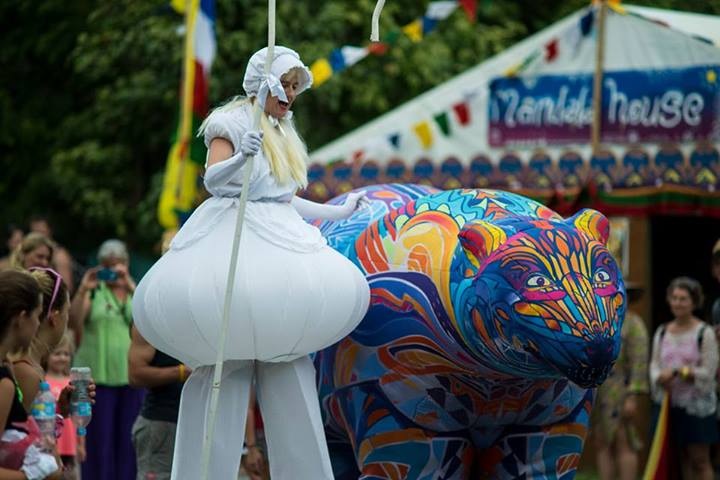 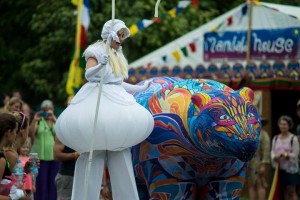 Woodford’s theme is ‘Take your monsters for a walk.’

Greens at Woodford came together yesterday in a climax of hilarity at the Great Green Debate. Proceedings commenced with the prolific, clever and hilarious Ben Law listing the horrors of Abbot’s first 100 days In government. In a wry aside, “you have to admire their efficiency”. Professor Ian Lowe followed with a rousing douse of realism culminating in a passionate song about climate change (to the tune of Waltzing Matilda). The surprises continued. Comedian Rod Quantock broke every rule in the debating rule book by changing sides mid-debate, pregnant ex-politician, Kate Jones, settled for breaking one of the fundamental rules by turning really personal and nasty, all to the full throated laughter of around 1200 patrons.

Given that the topic of the debate was that every cloud has a silver lining, there was plenty of material  in the  current political environments to draw on. West End identity and the longest serving environmental lawyer in the EDO, Jo Bragg valiantly attempted to find the silver lining in the defunding of the organisation in which she has spent most of her professional life.

The debate followed neatly from a stirring bout of activism at the Blue King Brown concert where fists were raised in unison over the plight of the West Papua subjects of a murderous Indonesia Sian regime. Other patrons had prepared themselves a the more theoretical Green Tent where Get Up guru, Simon Sheik, reflected on activism vs politics.
The confluence of entertainment and politics left everyone in no doubt that Woodford itself is the inspiring proof that a better life is possible. The opportunity for the Tribe to gather well out of the influence of the Murdoch Press and everything it represents and have a good belly laugh at our own expense is invaluable.
The natural crossover between West End and Woodford is evident in the number of locals on the ground. Expect further postings.