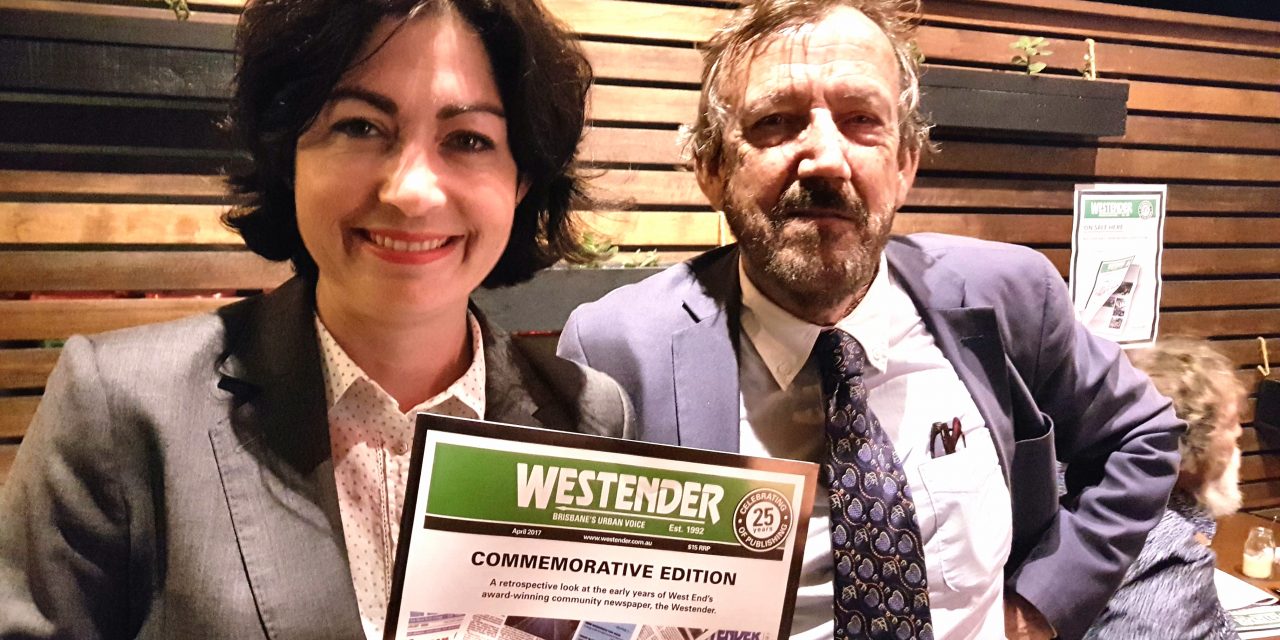 It was a 25th Birthday bash, a launch party to celebrate the special 25th Anniversary Commemorative Edition of the Westender, and a chance to gather together over a glass or two of wine to pay tribute to independent publishing.

For twenty five years, the Westender has recorded the key events, dominant issues, quirky characters and diverse nature of West End, in the process providing a personal, intimate insight into one of Brisbane’s most colourful suburbs.

Publisher Kerrod Trott began proceedings by thanking all those attending and explaining his motivations in commencing publication. Kerrod was, he said, mortified at the bleak media landscape in 1992, and the increasing monopolisation and loss of media diversity in Brisbane since then has only strengthened his commitment to independent publishing.

Dr Erin Evans, President of the West End Community Association, spoke of the long and fruitful relationship her association has enjoyed with the Westender, and of their mutual success in bringing to public attention the important issues facing the local community.

Terri Butler MP, Federal Member for Griffith, spoke about the death of the newspaper, and that she thought the answer was in the Westender, the model of news that is created because of that sense of doing what’s right, of holding up a mirror not just to politics but to community, of reflecting our community back upon itself, of telling the stories that matter.

Ms Butler spoke of the public good of news that matters, and of the need for a renaissance of community newspapers, of grassroots news.

Dr John Jiggens, the founding editor of the Westender, recounted the heady days of West End in 1992 and the thriving political, cultural and artistic atmosphere of the time.

Jonathan Sri, Councillor for The Gabba Ward, admitted that he was only four years old when the Westender was first published in 1992 and of how reading the back issues of the paper contained in the Commemorative Edition informed and educated him about the suburb’s colourful history. Jonathan recited a poem he had written especially for the occasion.

Clarrie Evans, a long term contributor to and supporter of the Westender, told of how the paper’s support had encouraged him to revive his career as a Producer of Rock Opera in Brisbane.