Who’s who on the Socialist Left? 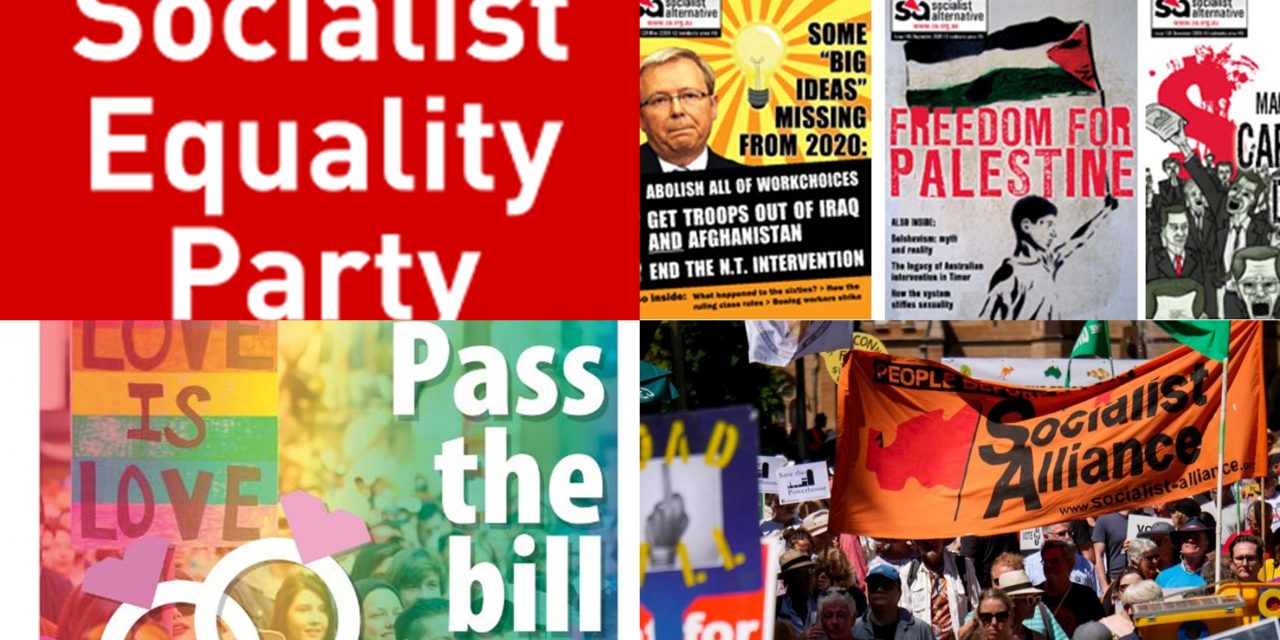 Ever wondered what all those socialist groups stand for?

If you have had similar experiences to me, you have probably been offered pamphlets and newspapers by a range of socialist organisations at rallies and during election campaigns. Names such as Socialist Alliance (Green Left Weekly), Socialist Alternative (Red Flag; Marxist Left Review) and the Communist Party of Australia (formally the Socialist Party of Australia), may be familiar to some. The shifting alliances between these parties and differences in policy and approach can be difficult to fathom, and a quick scan of the internet may only add to the confusion.

In a nutshell however, (and I’m happy to be corrected if I’ve got this wrong), all of these parties would claim to be Marxist anti-capitalist organisations, fighting for the rights of workers and the poor. They would also all claim that a new form of government, for and by the people, is the only way forward. Not all agree however on the means for achieving these ends.

Socialist Alliance is a coalition of organisations which stands candidates in all Australian elections. All the same, it does not consider that parliament is the correct mechanism for social change; rather socialism will only be achieved by direct action by the working class. It is often critical of the ALP and the Greens, but prefers them as a “lesser evil” to the Liberal and National Party alternatives. In order to address issues of Indigenous rights, global warming and social justice, Socialist Alliance aims to see the big miners and banks come under public ownership and control.  Liam Flenady is the Socialist Alliance candidate for Griffith.

The Socialist Equity Party (SEP) claims that it is the only far-left party to truly carry the traditions of Marx, Engels and Trotsky. Socialist Alliance and Socialist Alternative and their like, they maintain, are mere pseudo socialists. The SEP contends that the Greens, the ALP and the LNP, and even unions, prop up the capitalist system and that there are no significant differences between them.

The SEP, known until 2010 as the Socialist Labour League, traces its socialist lineage to the International Committee of the Fourth International. You really need a dictionary of socialism to appreciate the significance of this, suffice it to say, it is a claim to legitimacy in the fractured world of the far-left.

Nationally 13,945 people voted for the SEP in the 2010 senate election but it did not field candidates in Queensland. In 2013 the SEP will field two candidates for the Queensland senate: Mike Head, a University of Western Sydney law lecturer and Gabriela Zabala, who tutors undergraduate students in English literature.