Windsor will bring people together 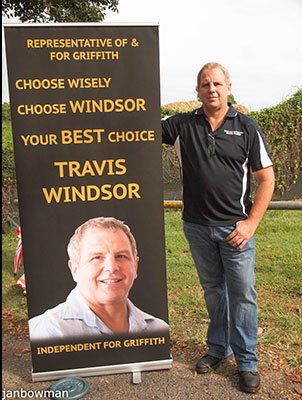 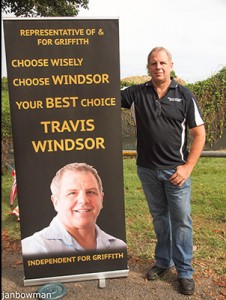 Travis Windsor is offering to bring all sides of politics together

Travis Windsor is standing for the first time as an independent candidate in Griffith.

Mr Windsor is proposing a model for politics that moves away from the current two-party model, which he considers unproductive. “I don’t want to bag either party, but when I saw the candidates put forward, I thought, ‘nothing is going to happen’. The Libs and Labor don’t get on, they don’t come together, they are never going to come together, whereas I bring people together,” he said.

Mr Windsor is remarkably positive about his chances in this election for a first timer. “I’m in there to make a difference. It would be a tragedy if one of the others got up. It would have a numbing and negative effect. If I got in it would have a positive and uplifting and creative effect,” he told No Fibs.

Mr Windsor comes from Albury-Wodonga and says he moved to Brisbane in 2007 specifically to be involved in the seat of Griffith. He said he knew that this is the best area for his unique skills.

His focus seems to be on the very local, for someone standing for federal parliament. He talks about “community stuff” he wants to achieve, such as a music hub in West End, and a polo pool in Carina.

Issues such as Medicare, he said, “are just crazy, contrived political positions. It just demonstrates how ridiculous the current situation is.”

As a keen biker, Mr Windsor considers that the Newman Government’s (VLAD) laws enacted in 2013 are “draconian in the extreme”.

He recently offered to meet with the Premier, “to discuss ways we can continue to target and crack down on criminal behaviour while allowing law abiding motorcycle enthusiasts to ride their bikes without fear of being stopped or charged by the Police.”

On preferences, Mr Windsor said he is disappointed that the Greens didn’t give him their first preference. He has preferenced the SPP at number two and the Greens at three. His how-to-vote card suggests ALP and LNP options at positions 8 and 11.