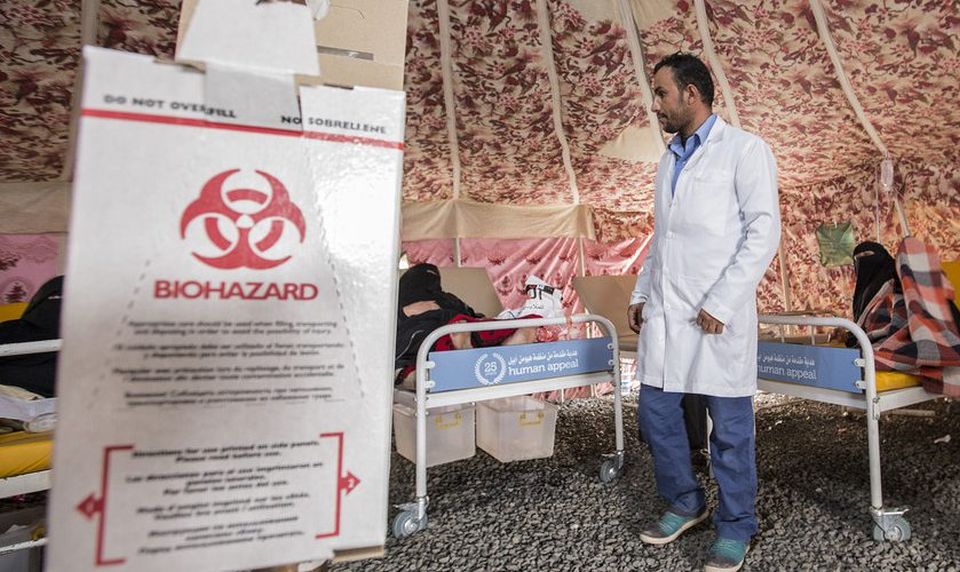 Yemenis, already struggling to survive after more than two years of war, are now being forced to choose between treating cholera and putting food on their tables, said Oxfam in a new report published today.

For the report, entitled Yemen: Catastrophic Cholera Crisis, Oxfam has spoken to many families who have to rely on selling their personal belongings or going into debt to buy food or pay for cholera treatment.

Seeking medical treatment is often the last resort, and many Yemenis only do so when it is already too late.

Shane Stevenson, Oxfam’s Country Director in Yemen, said millions of people were struggling to buy enough to eat, and those who were then hit by cholera were only able to afford the costs of transportation, medicine and doctor’s fees by further reducing the amount of food they bought.

“Each day that passes brings more suffering to the already unbearable lives of the Yemeni people,” Mr Stevenson said.  “The world is shamefully failing them. This new crisis, on top of the war, is leading to a man-made catastrophe in Yemen and thousands of people face stark live or die choices every day.

‘What more needs to happen in Yemen for the international community to properly respond?’

Since March 2015, the war has devastated the country, killing more than 5,000 civilians, pushing seven million towards starvation and leaving nearly half a million children malnourished.  It has led to the world’s worst outbreak of cholera recorded in a single year, with a staggering half a million suspected cases since April. Nearly 2,000 people have died of suspected cholera.

While the number of new cases has slowed slightly, the disease is still spreading and threatening thousands of people who don’t have clean water or healthcare.  The current rainy season is likely to aggravate the spread of cholera.

Several factors, resulting directly from the effects of war, drove the spread of cholera. Up to 30,000 health workers have not been paid or paid only partially and the conflict has also resulted in the devastation of the health sector. Only 45 percent of the health facilities are still fully functional, significantly hampering the ability to properly respond to the cholera outbreak.

Oxfam’s report published today includes personal stories of those struggling to survive the cholera crisis. It includes a 33-year-old farmer displaced by the conflict who has had to sell his most valuable possessions to be able to afford to take his mother to hospital every three months to treat her heart condition.

“It’s now or never, time to bring back parties to the negotiating table and to fully fund the humanitarian response. Waiting any longer will lead to more death and devastation of which the world will be shamefully complicit,” Mr Stevenson said.

Oxfam is calling on all parties to the conflict, and those backing it, to commit to an immediate ceasefire and cessation of hostilities, in order to end the bloodshed and facilitate humanitarian assistance.  The international community must also ensure that the 2017 Yemen Humanitarian Response Plan is fully funded and that both the cholera and food security crisis are dealt with coherently and urgently with sufficient funds.

Oxfam Australia Chief Executive Helen Szoke said the $10 million of humanitarian funding the Australian Government provided for Yemen in late April was a welcome start, but it was almost $18 million short of its fair share, according to Oxfam analysis.

“The Australian Government needs to continue to closely monitor the crisis, be prepared to commit additional funding this year and continue to use diplomatic channels to push for peace,” Dr Szoke said.

Donations to support Oxfam’s emergency responses in Yemen and around the world can be made online at oxfam.org.au/yemen or by calling 1800 034 034.

Since July 2015 Oxfam has reached more than 1.2 million people in eight governorates of Yemen with water and sanitation services, cash assistance and food vouchers, including 430,000 people as part of its cholera response.

Cholera is easily prevented with simple and affordable efforts at home and in the community, such as disinfection of water with chlorine, safe collection and storage of water, washing hands with soap, and understanding the myths, behaviours associated with cholera. When people suspect they have the symptoms they can drink a mix salt and sugar to rehydrate them while they make their way to the medical centre.